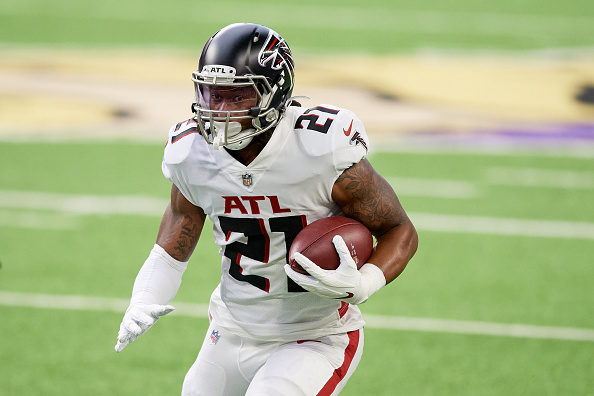 Another week where Chase Edmonds was the team’s lead back as he dominated the snap share however Kenyan Drake has returned to practice this week and is expected to play in Week 10. When both backs were healthy, Drake was seeing about 65-to-70-percent of the snap share.

After a small scare in Week 8 when Hill saw a larger snap share than usual things went back to normal in Week 9 with Gurley seeing 60-percent of the snap share and dominating the touches. The Falcons should continue to run Gurley out there as their primary back baring any sort of injury setback.

We saw Dobbins again lead the backfield in snaps for the Ravens in Week 9 but with Mark Ingram returning to practice this week it looks like this backfield will again be muddled which is too bad as the Ravens have a great matchup against the Patriots in Week 10.

Another week where Moss lead the backfield in snaps and again saw the red zone work. Now this was not a game where the Bills used their running backs that often but the it seems like the backfield is beginning to play out much like we expected it to prior to Moss’s early season injury with him being the primary back.

CMC returned and played 71-percent of the snaps and looked damn good. Unfortunately, he got hurt again and is expected to miss at least Week 10 against Tampa with a possible return in Week 11. Mike Davis was solid once again in the passing game and should see north of 80-pecent of the snaps in Week 10 with CMC out.

Montgomery has been dominating the snap share in Chicago since the injury to Tarik Cohen but now he too is on the mend after suffering a concussion in Week 9. Ryan Nall was forced to play by default but if Montgomery is ruled out for Week 10 we could very well see the 2020 debut of Lamar Miller who has been on the Bears practice squad this season.

Zeke was a bit banged up heading into this week so it wasn’t overly shocking that Pollard saw a bit more snaps than usual. That said, even as bad as Dallas has been this season, there is little to no concern about Zeke losing his job. Fantasy owners however can’t be loving the production.

Melvin Gordon saw 60-percent of the snaps here but neither running back had another going for them. The lack of involvement in the passing game for Gordon was shocking given that the Broncos were trailing by double-digits for most of this game. With the Broncos facing another easy matchup in the Raiders in Week 10 we should look for better production from this group.

Pretty much ready to give up here with the Lions. After seeing Swift take the lead in the snap count department over the past few weeks, it was Kerryon Johnson for whatever reason that jumped up with 33-perent of the snap share against the Vikings with Swift seeing just 40-percent. I don’t know…I really don’t.

Weird situation for the Packers this week with Jamaal Williams on the Covid-19 IR list which forced Aaron Jones back from injury a bit sooner than we expected. That said, Jones looked great and handled 60-percent of the snap share which is pretty much what we should expect from him even with Williams back in Week 10.

A concussion lead to David Johnson playing just seven snaps and paved the way for Duke Johnson to see 81-percent of the offensive snaps. Johnson’ ability to catch the football is a great asset and he has nice revenge game on the horizon with the Texans facing the Browns in Week 10.

Jonathan Taylor has back-to-back down weeks after being injured in Week 9 and then fumbled the football in Week 10. This has led to Jordan Wilkins and Nyheim Hines cutting into his workload. That said, Taylor is still the feature back and back to own for me on this team.

No real competition here. James Robinson is the clear-cut lead back and will be one of the favorites to win the NFL Rookie of the Year award as he paces out for 1600 total yards and 14 touchdowns this season.

Whelp, I was calling for a competitive game because I felt like we would get our answer on how the Chiefs plan to use CEH and Le’Veon Bell and instead what we got was an even great mess as Darrel Williams managed to see 29-percent of the snaps to Bell’s 31-percent and CEH’s 40-percent. I don’t know how you can confidently play anyone in this backfield right now and given the high-powered offense that is too bad.

Justin Jackson was injured on the first play of the game and that led to Kalen Ballage taking over as the lead early down back. Now, Joshua Kelley still saw the most snaps but Ballage got 15 carries to Kelley’s nine. In Week 10 Jackson may not play but Troymaine Pope could return. When Pope was last active it was actually Kelley who saw his snap share drop so it’s possible that without Jackson, Ballage remains as the early down back with Pope and Kelley splitting snaps as a change of pace option.

Josh Jacobs is the guy, no real questions about that one here.

With Myles Gaskins on IR and Matt Breida out with a hamstring injury the Dolphins turned to Salvon Ahmed who played 46-percent of the snaps. Jordan Howard found the end zone with his customary one-yard plunge while toting the ball a team high 10 times. In Week 11 it is expected that Matt Breida could be active but it is also worth noting that the Dolphins acquired DeAndre Washington who could also be making his debut.

Dalvin Cook is playing like he is in a video game right now with back-to-back games of over 200 total yards. As long as he is healthy the Vikings are going to feed him the rock.

Rex Burkhead led the team in snaps in this one but that was likely only due to Damien Harris existing with a chest injury. When everyone is healthy I expect Harris to be the lead back here however Sony Michel was activated off of IR and could play this week against the Ravens.

The snaps were closer than I expected but the Saints were also blowing out the Buccaneers in this one so it made sense to give Murray some extra run and let Kamara take a rest. We should not expect this sort of spit to be a consistent thing.

Wayne Gallman is going to continue to be the lead back while Devonta Freeman is out of the lineup and that is something that should continue into Week 10 as Freeman was seen walking off the field with trainers at practice today.

Why Frank Gore sees as many snaps as he does for a win-less teams will forever confuse me but he again out-snapped rookie La’Mical Perine and that is just something fantasy owners will need to deal with until Gase is out of there.

The Steelers actually found themselves in a bar fight against the Cowboys this week, barely getting a win. Conner dominated that snaps but did not have a good day on the ground as the Steelers played from behind for most of this one. That said, he still dominated the snap share.

No Chris Carson or Carlos Hyde again this week but Travis Homer was healthier this week than he was last week and it showed as he took over the snap lead from rookie DeeJay Dallas. Alex Collins also made his season debut, playing 20-percent of the snaps. It is possible Chris Carson plays this week which means Homer is the backup and Dallas goes back to being on the bench.

It’s possible that Raheem Mostert returns this week which means he is the clear-cut lead back. There is also a chance that Tevin Coleman will play after dealing with a knee injury last week. This backfield is muddled and what we see above will remain inconsistent until the starters are back.

Tampa was embarrassed by the Saints on Sunday Night Football in Week 9, trailing from the jump with no hope of really catching up. Fournette saw the majority of the snaps because of his pass catching ability but I don’t expect the snap share to be this lopsided in more competitive games.

His name is Derrick Henry and we are in the month of November. Look at those stats and Henry’s second half stats during his career. They are impressive.

Washington was down for most of this game and had to make a change at QB following the injury to Kyle Allen . McKissic saw 14 targets in this game and played 80-percent of the snaps. There is a much more favorable matchup for Gibson in Week 10 as Washington faces the Lions.