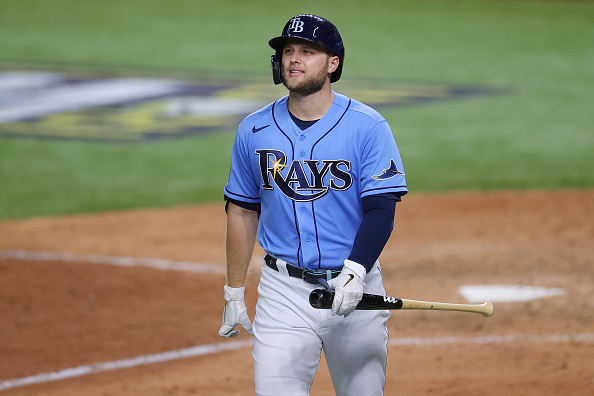 As outlined in the Statcast primer article in the draft guide, delving into the leaderboards yields intriguing insights. Figuring out if the expected statistics prove more reactive or predictive remains to be seen. For the purposes of this exercise, both hitters and pitchers get placed under the microscope based on the truncated 2020 season. Putting too much weight on a shortened sample in fantasy can be dangerous, so take the information, apply them to your own research or if a player stands out, refer to his player profile for a deeper dive.

Some numbers to keep in mind while parceling out the details revealed in the charts or cited below them:

Remember, when viewing xwOBA, for hitters above this mark proves desirable while pitchers thrive being below this number. Less projected traffic on the bases equals better ratio statistics. Recalling the wisdom of Louis Pasteur, "where observation is concerned, chance favors only the prepared mind." It's time to locate some players of interest on the Statcast leaderboard pages which can be accessed here by type:

There's three categories of expected statistics for hitters displayed above, xBA, xSLG and xwOBA. With this in mind, here's the top-10 batters who finished with expected numbers higher than their actual in all three then breakdowns by position:

It's hard to believe Corey Seager could improve upon last year but his expected numbers suggest there's not much flukiness to them. Only 2020 could make Mike Trout feel underappreciated but here we are. Hoping a full season lies in the offing for Fernando Tatis Jr. for many reasons, but at the top of the list, how he responds to a slump. He's yet to face adversity due to time lost by injury (2019) along with the 60-game sprint from last year. Other questions from above:

Some intriguing names appear in the lists by position of players who improved in all three categories with an xwOBA above .300, so take note:

Just like the first portion of this exercise, there's no guarantee a player regresses fully to the numbers reflected in a result above or below his actual ones in the season ahead. However, this group produced numbers above their respective quality of contact in 2020 across all three categories, with at least 10 points of difference in each:

Getting too worried about José Abreu coming off of an MVP season may be overthinking things. Key on his power surge supported by his indicators. Even if he produced the expected numbers listed above, he's still a worthy target in 2021. Dominic Smith may lose at-bats if there's no universal designated hitter or Pete Alonso may as well if Smith comes in from left field to first base for late inning defensive purposes. Every plate appearance matters for counting statistics.

Not only will Nelson Cruz battle Father Time in his Age-40 season, he's also trying to improve his quality of contract. It remains to be seen how a deadened ball affects hitters in 2021 but D.J. LeMahieu could lose some home runs if one takes five feet off of every fly ball due to his propensity to hit to the opposite field. Other burning questions from the group above:

Keeping with the theme, here's the hitters by position who also registered expected numbers below their actual across all the categories:

Trying to sift through the expected pitching statistics proves more difficult to navigate than the hitters. But, starting with xwOBA, here's the breakdowns separated by starters and relievers in each chart along with other pitchers of interest below. It's sorted by pitchers who move below or remain below the league average xwOBA (.321):

Other arms of intrigue:

And for the relievers:

Now for the same exercise but with expected ERA (xERA) for each pitcher type. Once again, beginning with the starters targeting an xERA below league average (4.46):

Fantasy owners hope Jordan Montgomery pitches towards his xERA as the third starter for the Yankees. If so, wins should accompany this improved ratio. It's a pivotal year for Yusei Kikuchi working in the Mariners six-man rotation. He needs to improve his arsenal and avoid big innings to take the next step forward in his evolution as a pitcher. Here's some others who just missed the list above:

There's much to unpack here, but some intriguing late round targets include Lindblom and Montas. Two upside arms in Miami plus buying high on the hype with Giolito and Musgrove could pay off in 2021. Now for the relievers:

Just missing the list includes two southpaws who may work in timeshares for saves, a veteran who lost his closer role in postseason plus a traded reliever who appears safe to lead his new team in saves in 2021:

Last, but not least, the same list but for relievers:

It remains to be seen if Bryan Garcia can move into the closer role full-time for the Tigers. Anyone with an ERA below one, even in a shortened season projects to regress to the mean. How much determines how Colomé and Diekman fare in 2021 but each should receive save chances for their respective teams. Staumont's trying to add a change-up to improve his arsenal, if he does, a step forward could occur.  Joakim Soria leapfrogged Crichton in the Arizona bullpen hierarchy.

This exercise can yield many types of results. Heed the numbers, dig further if intrigued and parcel out the noise. Skills vary year-to-year so variance cannot be avoided. However, identifying the land mines throughout a draft can lead to fantasy success.