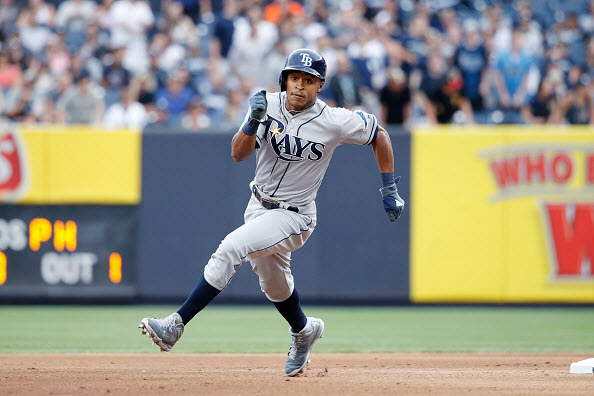 Happy Monday! Take a break from your duties at work and take a couple minutes to take a look at this article. Hey, the work will always be there and you get right back to it! However, fantasy baseball is right around the corner and if you’re particularly interested in any players in this article, you’re certainly going to want to analyze the numbers, trends, and outlook for their 2018 fantasy value, as well as the current draft capital required to get one of these guys.

In this week’s version of ADP Trends, we are going to take a look at two players whose average draft positions fluctuate pretty heavily, depending on the draft and scoring format. The last player is a recent signee who is being drafted ahead of guys that simply don’t make much sense. Without further ado, let’s get into this week’s edition of ADP Trends!

The Curious Case of Mallex Smith

Smith can run and has an excellent opportunity for a potential everyday role in the Tampa outfield, and if that ends up being the case, he’s an easy 30+ steal guy for us fantasy owners. For his minor league career, per 162 games he would register 91 stolen bases, which is absurd. At the big league level, his per 162 game mark would be 34 bags in a season. With good health and a slightly improved offensive game, he could content for the league leaders in that category. He won’t provide much elsewhere, but fantasy owners are fine with a one-trick pony, so long as it’s in the stolen base category.

However, the problem lies with his current price and it truly fluctuates from draft to draft. In the past week, take a look at his selection and overall pick number.

As you can see, the draft room dictates where Smith will be selected. He’s nearing being selected in the top 100, which is absolutely crazy, considering there are other drafts where he approaches pick No. 400! Speed kills and some owners are willing to overpay for speed, but be wary of what draft capital you use on Smith to select him. He has always been able to run, but has yet to play more than a half of season worth of games. The later you can get him the better.

As loyal members of #FANation, you will know my affinity for Chatwood this season, and the fact that he’s rather inexpensive makes him even more desirable in 2018. He was a product of a terrible home stadium and getting out of Coors will be great for him. Many fantasy owners will assume that that is the type of pitcher he is, but guess what, it certainly is not! He allowed a slash line of .292/.367/.466 but those numbers fall substantially when he is on the road. Between the Mock Draft Army and NFBC, there is a difference in the evaluation of the Cubs’ early offseason acquisition.

Take a look at his ADP, as well as earliest and latest selection in the two formats.

Chatwood’s ADP being slightly higher isn’t much of a surprise, given the premium placed on pitching in the NFBC, but at his current ADP, he’s an absolute steal. The home games at Coors Field inflated his numbers and if you would do away with home games during his time in Colorado, Chatwood is the type of pitcher that people would be absolutely salivating over. In 2017, his road ERA was 3.49, while his home ERA was 6.01. In 2016, his home ERA was 6.12, and his road ERA was a stellar 1.69.

If he can add a few more strikeouts and build upon last year’s 7.31 K/9, he has a quality opportunity to enter the top 30-35 starting pitchers in fantasy this season. The Cubs will get him plenty of wins and he’ll pitch well enough to be no worse than a SP4 this season.

Tim Lincecum on Your Fantasy Team? Not on Draft Night

Sure, in the later rounds of drafts, you’re looking for upside, but legitimately, where is it with a pitcher that hasn’t had an ERA below 4.10 since 2011, not to mention that he didn’t pitch at all in 2017.

What do A.J. Puk, Raimel Tapia and J.P. Crawford all have in common? These three guys all are being drafted, on average, later than Lincecum!

Follow me on Twitter @colbyrconway and be sure to check out the Free Agent Tracker and Fantasy Baseball Podcast!