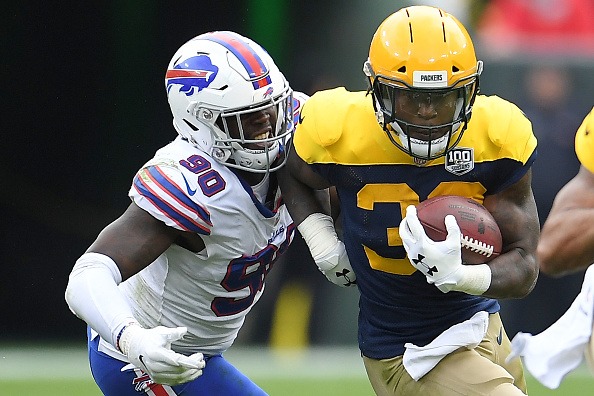 Andy Dalton (QB – Cincinnati Bengals; FAAB Bid: 20%) It’s difficult to bid so much on a quarterback, but at this point if you’re a Jimmy Garoppolo , TyRod Taylor , or Ryan Fitzpatrick owner you may have to pay up a bit for Dalton who has played like a top 12 quarterback in fantasy. He’s on pace for career high’s in both passing yards and touchdowns and he has four great matchups coming up against Miami, Pittsburgh, Kansas City, and then Tampa Bay. Only the Kansas City game is on the road, which is a tough environment but the Chiefs secondary is pretty poor as is the Bucs. Dalton seems to have found a new favorite weapon in Tyler Boyd and while the loss of Tyler Eifert is tough, there are others that can step up in a time when the offense is clicking.

Aaron Jones (RB – Green Bay Packers; FAAB Bid: 40-50%) So last week Jones was mentioned and while he’s over 50% owned he’s still available in a fair amount of leagues. The FAAB bid is going to be a bit more costly this week because everyone will be on him, and to find a running back of his talent is a rarity especially when Aaron Rodgers has been outspoken in regards to getting Jones more snaps and reps. Jones is a legitimate RB2 the rest of the season and could solve some problems you may be having if you’re a Dalvin Cook , Jordan Howard , or Leonard Fournette owner. He saw 11 carries last week for 65 yards and a touchdown and once he gets going he’s a solid candidate for at least 15 touches per week.

T.J. Yeldon (RB – Jacksonville Jaguars; FAAB Bid: 25%) There’s obviously some skepticism over spending a quarter of your budget on a guy like Yeldon when he’s the obvious second option behind Leonard Fournette . However, Fournette has had issues getting on the field and staying on said field. Currently Yeldon has performed like a top 20 running back in PPR formats. If he averages 10-12 carries per game and catches a few passes each week as he’s done so far this year then he’s definitely a flex play. There is some trepidation that Fournette explodes as the season progresses, but Jacksonville has shown a hesitancy to keep him on the field with his recent injuries.

Geronimo Allison (WR – Green Bay Packers; FAAB Bid: 15-18%) Allison’s fantasy value, and production for that matter, is somewhat dependent on Randall Cobb ’s status. Allison became an interesting play once Cobb was ruled out before Sunday’s slate started and he took advantage of everything thrown his way. He had six catches on 11 targets for 80 yards, but left the game with a possible concussion. Now that is obviously something worth keeping an eye on and if you don’t want to pay for him, that’s fine. There are a plethora of receivers on waivers worth considering. But keep in mind that Allison, in four games this year, has already set a career-high in receiving yards (289) and could finish the season with 100+ targets if he can stay on the field. He’s another big target for Rodgers to utilize and has gained the quarterback’s trust early on.

Eric Ebron (TE – Indianapolis Colts; FAAB Bid: 15-18%) Alright it’s really not funny anymore. Given how much work he’s gotten since Jack Doyle went down, Ebron needs to be owned while you can grab him. Too many tight ends are getting hurt while Ebron’s had 21 targets over the last two weeks. He already has three touchdowns on the season and while he hasn’t had more than five catches in a game, he’s still getting looked at. A tempting matchup against New England Thursday night could provide for plenty of targets if the Colts are trailing in the second half.

Jameis Winston (QB – Tampa Bay Buccaneers; FAAB Bid: 15-18%) Winston has officially been named Tampa Bay’s starting quarterback for Week 6 after Ryan Fitzpatrick failed to follow up on the stellar start he had just a few weeks ago. Now Tampa has a bye this coming week, but in a 12-team league or a 2-QB/Superflex league I’d start putting in bids for him now. He is only 8.4% owned on ESPN and that’ll spike a little bit with the news that Winston has regained the role as the starter. Hopefully with his recent suspension he was given some time to think about his off-field actions and the ramifications his actions could have on his career.. Winston has great weapons at his disposal, with the exception of the running game. But hopefully the Bucs find themselves in position to have to abandon the run and air it out with Winston who still has one hell of an arm. 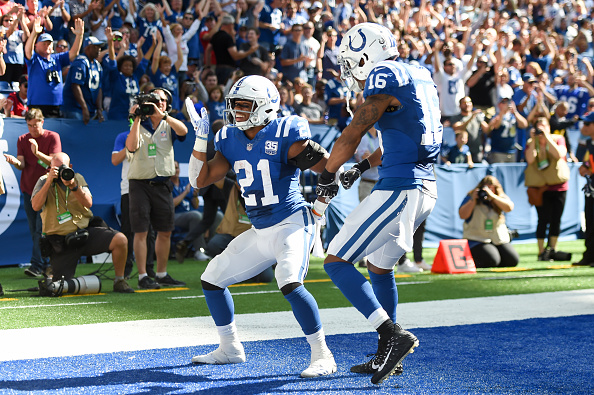 Nyheim Hines (RB – Indianapolis Colts; FAAB Bid: 15%) This is a gamble because Hines is a part of a RBBC, but Hines proved he has some value as a pass-catching running back on Sunday. And there will be games coming up where the Colts may be airing it out as an attempt to come from behind. If Marlon Mack is ruled out Thursday night against New England then Hines finds himself in another favorable matchup to catch some passes out of the backfield. He has just 18 carries on the year compared to 22 catches. He’s worth a gamble in deeper leagues where running backs are scarce.

Nick Chubb (RB – Cleveland Browns; FAAB Bid: 5-7%) You really DO NOT need to go crazy bidding for Chubb. However, if there were ever an injury to Carlos Hyde then Chubb would be in line for a nice workload. The reasoning behind a smaller bid for Chubb is that he currently doesn’t get on the field very much. Sure he had three carries that he turned into 105 yards and two touchdowns, which may cause some people to go wild with their bids, but they're going be disciplined about this. You should pick up Chubb as a viable handcuff to Carlos Hyde or for running back depth. Don’t pick him up because of what he did Sunday. Chubb’s lucky if he sees five snaps each game and maybe the performance on Sunday earns him more snaps, but he’s a long way from taking carries out of Hyde’s hands.

Frank Gore (RB – Miami Dolphins; FAAB Bid: 5-8%) I’m not crazy about this addition, but if the Dolphins keep the ball out of Kenyan Drake ’s hands then Gore is the primary beneficiary for work. At 35 years old it’s difficult to imagine a scenario where he can hold up for a full season, but he did have 13 touches on Sunday with a touchdown. The Dolphins have to go up against the Bengals on the road next week and if Miami finds itself in a similar situation to this past week then Gore could get more snaps. Regardless of game script, he’s averaging 9.5 touches per game this season so he’s at least worth a stash in 12-team leagues.

Dede Westbrook (WR – Jacksonville Jaguars; FAAB Bid: 10-12%) Westbrook’s a bit of a boom/bust player, but he has a 75% catch rate on the year so he needs to be owned in more leagues. He saw a season-high 13 targets on Sunday against the Jets even with the game well in hand for a majority of the contest, and he turned those targets into nine catches for 130 yards. It’s a bit of a carousel in the Jacksonville receiving game, but Westbrook’s still a guy who can get six targets per game and maybe more if he can maintain the catch rate.

Phillip Dorsett (WR – New England Patriots; FAAB Bid: 6-9%) You obviously can’t go too crazy with this bid because the Patriots gave Josh Gordon some action on Sunday and Julian Edelman is coming off a suspension. But still, in each game Dorsett has played this season he’s seen at least seven targets in each and he’s turned those into 16 catches for 165 yards and two touchdowns. Obviously it’s hard to get excited for a guy this deep on the Patriots wide receiving depth chart, but remember Julian Edelman is very rusty and even in training camp he said he didn’t have his legs completely under him yet. Maybe another month of recovery has done him well, or maybe he’s still rusty. You don’t need to go too crazy on this bid, but don’t write him off just yet.

Wendell Smallwood (RB – Philadelphia Eagles; FAAB Bid: 12-15%) While it might be costly in deep leagues, Smallwood has some upside if you consider the injuries to Darren Sproles , Corey Clement , and Jay Ajayi , even though Ajayi did play this past week. Smallwood does possess some upside as he has 21 touches over his last two games. In deeper PPR leagues he’s definitely worth a flyer since Carson Wentz has targeted him ten times since his 2018 debut. He’ll obviously need some injuries to see a significant increase in reps, but he’s worth a grab in deep leagues especially if you’re an Ajayi or Clement owner.

D'onta Foreman (RB – Houston Texans; FAAB Bid: 8-10%) Watching Lamar Miller try to be the lead running back in Houston has been painful. The guy just lacks explosiveness and he’s found the end zone just once this year. It’s beyond frustrating and Houston seems to know what they have with their other backup running back, Alfred Blue . So with D’Onta Foreman due back in a couple weeks, it’s worth putting in bids for him now to stash him but only in deep leagues. Foreman’s worked in a small sample size, but last year he averaged 4.2 yards per carry and he has a bigger frame that’s perfect for goal line work.

Kalen Ballage (RB – Miami Dolphins; FAAB Bid: 3%) D’Onta Foreman is to the Texans as Kalen Ballage is to the Dolphins. Ballage, however, at least logged a carry on Sunday because he’s mostly a special teams player right now. The Dolphins are getting nothing out of Kenyan Drake and it’s partly their fault because they have given him 11 total touches the last two weeks. But he’s worth a stash in deeper leagues if he can slowly get worked into the offensive game plan. Mind you he’s still behind Drake and Frank Gore on the depth chart. 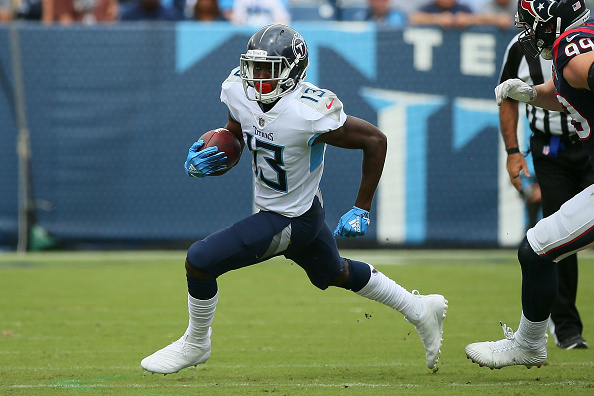 Taywan Taylor (WR – Tennessee Titans; FAAB Bid: 16%) There should be quite a bit of interest in Taylor as he had some praise coming out of training camp and he’s seen his snaps increase week-to-week as well as his targets. On Sunday he had seven catches on nine targets for 77 yards and after Corey Davis he’s a pretty decent WR2 option in Tennessee’s offense. With Marcus Mariota looking healthier each week, Taylor should be a fixture in this offense the rest of the season.

Keke Coutee (WR – Houston Texans; FAAB Bid: 10-12%) Coutee’s going to garner a lot of attention because in his first career game on Sunday he had 15 targets and turned those into 11 catches for 109 yards. That’s an OK debut, I guess. Coutee had more targets than DeAndre Hopkins and three times as many as Will Fuller V. Don’t always expect that. This was clearly the case of the Colts scheming for those two guys, and Fuller left with an injury, which left Coutee open on numerous occasions. Still he is a second-year receiver that had some hype coming out of training camp. Definitely get a bid in for him if you do need WR3 or Flex help.

Tyler Kroft (TE – Cincinnati Bengals; FAAB Bid: 10-12%) Kroft is a guy who has benefitted in the past from injuries to Tyler Eifert . And sure an injury to a teammate probably isn’t how he envisioned getting work, but beggars can’t be choosers. Last season Kroft caught 42 passes for over 400 yards and had seven touchdowns. In a deeper league where you may have lost Eifert, Greg Olsen , Delanie Walker , or Jack Doyle this is a guy worth consideration. The Bengals offense has never looked better with Andy Dalton and Kroft could slide in and be the red zone target he was a year ago.