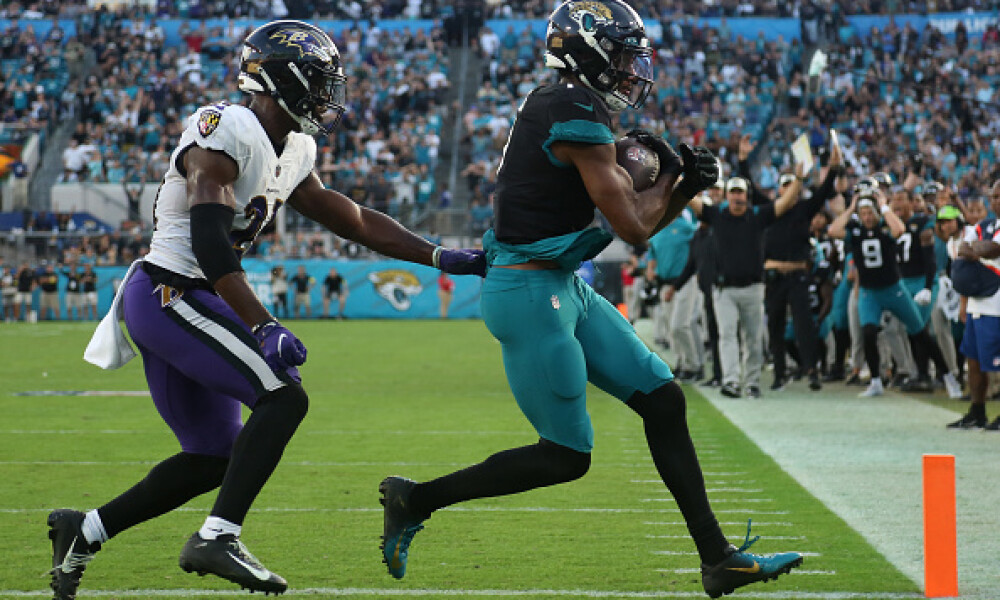 Let’s be honest here, in that every week of NFL DFS is fun. However, this week is going to be really fun from the daily fantasy football perspective. On Sunday’s main slate, we have three games with an O/U of 50 or more points, and the storylines on this slate are endless. Joe Burrow vs. Patrick Mahomes. Deshaun Watson’s return to Houston, and the football field. Mike White looks to go 2-0 as a starter this year. The ever important revenge game narrative for Philadelphia’s A.J. Brown. Who ever would have thought that we are going to get some fantasy goodness in a Trevor Lawrence-Jared Goff showdown. Amon-Ra St. Brown is one of my favorite receivers on the slate as a whole, and is going to be a lock for my Week 13 NFL DFS lineups. From studs, to value plays, to mid-tier players, I got it all for you in this week’s DFS WR Coach. Here are my favorite DFS options at wide receiver for your Week 13 NFL DFS lineups, including my top receivers, best value plays, and receiver to fade.

The Jaguars rank 30th in DVOA against the pass and they rank 26th in DVOA against short passes. Guess where St. Brown is going to thrive in this matchup? The high-volume receiver has at least seven receptions or eight targets in five straight games, and this matchup should see some points put up on the board. St. Brown isn’t cheap by any means, but the stars are aligning for a big performance from him against Jacksonville.

REVENGE GAME! The Titans rank 17th in DVOA against the pass this season, and they are tough to run on, so I expect a big day for the Philadelphia pass attack. Brown will want to make a statement against his former team, and he should get every opportunity to do so, considering that the Titans have allowed the third-most fantasy points per game to wideouts over the last four weeks. Over his last six games, Brown is averaging 4.2 receptions for 65.8 yards and one touchdown per game, and assuming he’s healthier than last week, he should put up 15+ fantasy points against his old club.

One of his touchdowns was a bit fluky, considering that a mid-play injury took a defender out of the play right before Wilson got there, but nonetheless, Wilson just continues to get it done. He totaled 95 yards and two scores this past week, and with Mike White at the helm, the New York passing offense, at the very least, doesn’t look absolutely anemic. The Vikings rank 29th in DVOA against the WR1 and 27th against the pass overall, and Wilson is the only constant from week to week in the New York passing attack. The talented rookie should feast on this Minnesota defense that has allowed the most yards to wideouts over the last month.

The Bengals figure to be at full strength with likely both Ja’Marr Chase and Joe Mixon back in the fold, and I do like Chase a good bit in this matchup. So, let me start with this: If you have the money, get Chase. If you need to save just a smidge, go with Higgins. The Chiefs have allowed the seventh-most fantasy points per game to receivers this season, and they rank 26th and 18th in DVOA against the opposition’s WR1 and WR2 respectively. If we include the postseason, Joe Burrow has averaged 348 passing yards per game against Kansas City, and he has a 6:1 TD/INT ratio across those two games. Expect a big day for the Cincy pass attack, and a lot of DFS ownership here as well.

I mean, we have to include Watson, right? The Bears have allowed the fifth-most fantasy points per game to receivers over the last four weeks, and they rank 32nd in DVOA against the opposition’s WR1. Over his last three games, he may only have 12 receptions on 20 targets, but he does have 265 yards and six touchdowns during that span. Watson has the speed needed to “unleash” this offense, and regardless of who is under center, this matchup is too good to ignore.

Smith may not have the revenge game narrative in this one like his teammate (A.J. Brown) does, but Smith does get to face the same crappy Tennessee secondary his fellow receivers do. The Titans rank 28th in DVOA against the WR2, and Smith has at least eight targets in four of his last five games, including in each of his last three. I love targeting this Tennessee secondary, and Smith has a very reliable floor for fantasy purposes.

Allen has at least five receptions and seven targets in each of his last two games, and he should be in store for a big week against this Vegas secondary that ranks dead last (32nd) in DVOA against the pass this season. The Raiders have allowed the eighth-most yards to wideouts over the last four weeks, and Justin Herbert would be wise to look towards Allen in this matchup, considering that Vegas ranks 20th and 32nd in DVOA against the WR1 and on short passes respectively.

This game should be an overwhelming positive for the Jacksonville passing attack, and over the last two weeks, Jones is averaging 9.5 receptions on 12 targets per game! He hasn’t been a frequent flyer in the red zone by any means this year, considering he has just one score, but he does have his games where he gets absolutely peppered with targets. Jones has four games with double-digit targets this year and with Trevor Lawrence likely dissecting this porous Detroit secondary, I expect another 15+ fantasy points (DraftKings) or 12+ fantasy points (FanDuel) from Jones in this one.

By playing Pickens, we’re banking on some big plays, and going up against the Falcons, that’s a bet I’m comfortable making. The Falcons rank 26th and 30th in DVOA on passes to the left and right side of the field respectively, and Pickens lines up out wide the majority of the time. The Falcons rank 23rd in DVOA against deep passes, and the rookie receiver for Pittsburgh is a big play waiting to happen. He’s averaging 14.2 yards per reception this season, and if he just hauls in the “easier” receptions, we are looking at five grabs for 60+ yards, and then we just need the score.

Is this a revenge game for Deshaun Watson? I don’t really know how to go about the terminology there, or my thoughts of it in general, but it’s a good matchup for the Cleveland passing attack. Watson could have some rust after not playing in a regular season game since January of 2021, but again, it’s a great matchup against the 24th ranked team (Houston) in DVOA against the pass. The team figures to be cautious with Derek Stingley Jr., so I wouldn’t be surprised if he doesn’t play again. Watson figures to pick apart Houston’s garbage Tampa 2 defense, and if you’re making a ton of lineups, throw Bell in a few of them. He has five or more targets in three straight games, while playing over 60 percent of the snaps in two of those three. Amari Cooper and Donovan Peoples-Jones are both in great spots, too, but Bell is super cheap, and Houston’s defense has allowed the seventh-most yards to opposing receivers over the last four weeks.

Burks has been damn good of late, posting 14+ FanDuel points in each of his last two games. While the Eagles have been a bit more generous to receivers of late, they still have allowed the ninth-fewest fantasy points per game to opposing receivers this season. Philadelphia ranks second in DVOA against the pass overall this season, not to mention first in DVOA against the opposing No. 1 wideout. Tennessee will throw it a bit in this one, sure, but it’s going to be a Derrick Henry game, seeing as the Eagles have allowed the fifth-most rushing yards to running backs over the last month or so. I’m not playing Burks this week, as I’m not a fan of targeting those Philly corners, but if you choose to do so, GPPs only.