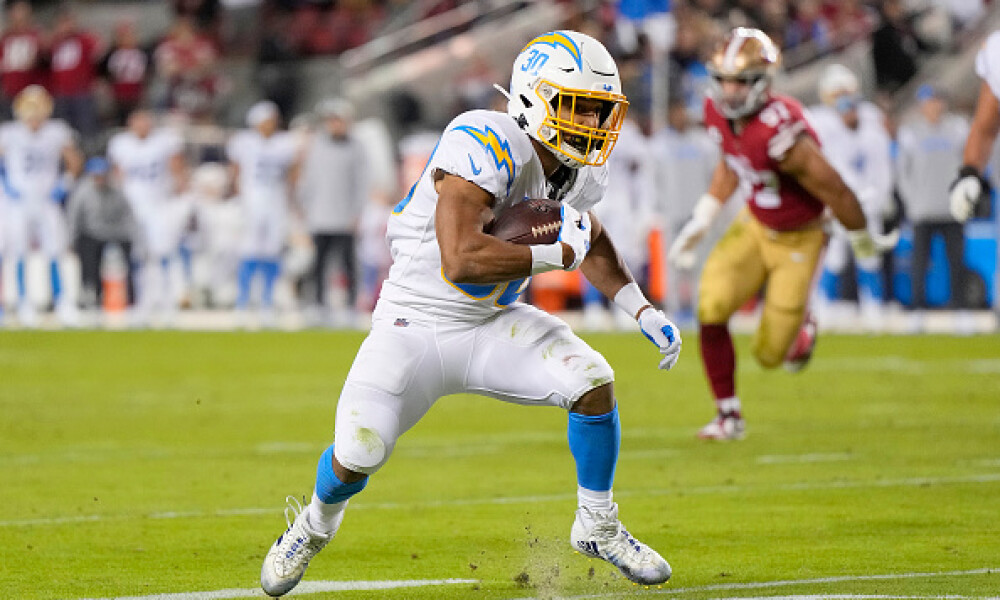 We flip the NFL DFS page over to Week 13. Our streak of having the cover image of the RB coach score 20+ points (Etienne in Week 9, Barkley in Week 10, Monty in Week 11) ended in Week 12 as Jeff Wilson struggled en route to scoring 12.2 points, so we’ll look to bounce back this week in that regard, but we did land strong picks in Austin Ekeler and James Conner. Nick Chubb and Ekeler are in smash spots this week and both make for elite plays. Why else do I like them and who else do I like this week? Let’s dive into the top plays, values, and fades for NFL DFS action on DraftKings and FanDuel for Week 13!

Last week I wrote: “Ekeler is a pretty safe play, as he has scored at least 11.2 dk points in every single game this season (that low score came in Week 1) and his average of 23.4 points per game is the highest on the slate by a wide margin (Henry is the next closest with a mark of 21.8).” He went on to score 25 points despite rushing just five times for 20 yards because he caught 11 passes on 15 targets(!) for 60 yards and a score. He is easy to like once again this week as the Chargers will take on the Raiders and they rank as a top-five matchup for running backs this season. The way he provides both a great floor with a high ceiling makes him an elite play in all formats.

Chubb is coming off another strong game in which he rushed for 116 yards and a touchdown. He has 1039 rushing yards on the season, which is good for third most in the NFL and he has 12 touchdowns. He has scored at least 18 fantasy points in eight games this season (missing that mark just three times). It doesn’t get any better than this matchup with Houston; they are allowing the most fantasy points per game to the running back position, the most rushing yards per game (169), and have given up the fourth-most rushing touchdowns (15).I would honestly be surprised if Chubb doesn’t rush for 100+ with a touchdown at the minimum.

Jones is the cheapest price he’s been (on DK) since Week 2. He only has two rushing touchdowns on the year but he does have four receiving touchdowns and he has racked up over 1100 total yards as he is having another strong season. He has a nice matchup on tap this week as the Packers will take on Chicago. The Bears have allowed a league-high 19 rushing touchdowns now while allowing an average of 144 rushing yards per game. Regardless of if it’s Aaron Rodgers or Jordan Love under center this week; I like the price point and matchup for Jones and think he will be a rock-solid play.

Pierce has been terrible the past two weeks, but this is a nice bounce-back spot for him. He is still the main guy in Houston and he gets to take on a Cleveland defense that ranks in the top three as a matchup for running backs this season. The nice part about the recent struggles for Pierce is that it has lowered his price tag and he is the cheapest that he has been since Week 4. I think both teams will lean on their backs in this game and both will find success. I see this game being competitive, which will keep Pierce on the field and getting the ball, unlike last week when the Texans were blown out right away by the Dolphins.

Murray is the featured back for Denver and the volume (as you can see in the image below) has been great with Melvin Gordon out of the picture. His price tag hasn’t really changed much at all and he is extremely cheap still, which is very nice for a guy getting the type of volume that he is getting. If he catches a few passes or finds the end zone, he will easily hit value. His upside may be a bit limited with how bad the Denver offense is, but his floor seems to be pretty solid right now and he makes for a solid cash game play if needing to go cheap at RB2.

Dillon had his first double-digit point game since Week 1, but that is not a good reason to consider using him this week. His upside is still very limited and it took the Packers scoring a season-high 33 points for Dillon to get to his 17.8-point mark. He has picked up fewer than 9 rush attempts in back-to-back games and his touchdown in Week 12 was his first one since Week 1. While the matchup is strong and I do like Aaron Jones, Dillon is not worth his price tag and is very overpriced for the production that we have seen from him this season.

Other Potential Options Based on Injury Updates to Starters