NFL DFS TE Coach Week 13: Travis Kelce is Worth Paying Up For Against the Bengals 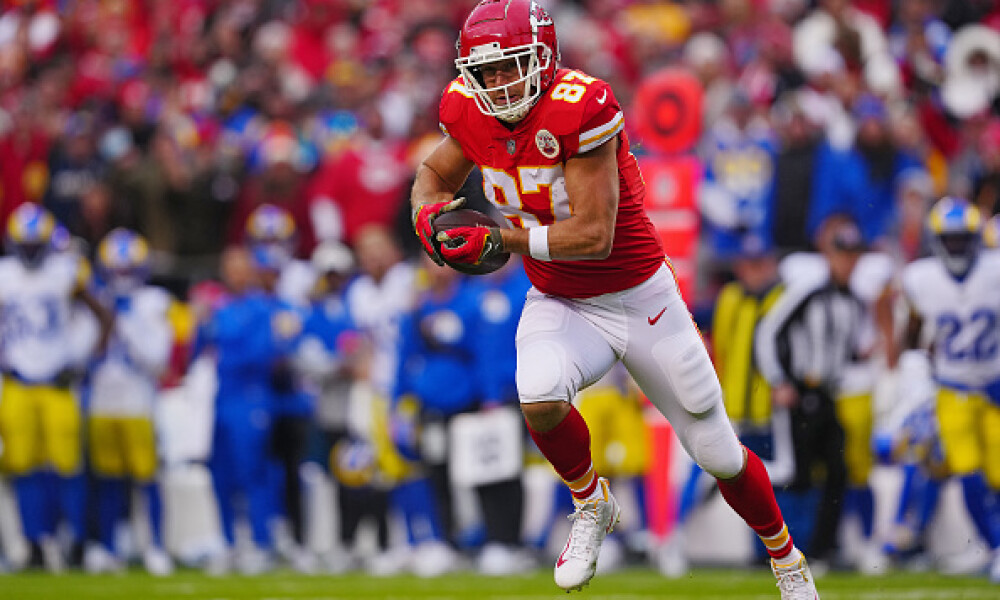 Redraft fantasy football leagues are like relationships, oftentimes they are bumpy but sometimes they go the full distance and you leave with that ring on your finger. That championship. But sometimes they go pretty poorly and end horribly. And early. That’s why you need friendships to help pick you up. Friends that will always be there for you. DFS is that friend. It’s week 13 now and there’s no doubt that some of us have been eliminated from playoff contention. And at some point or another, that ride will be over for all of us. But our friend DFS will always be there to comfort us. To keep us in the game. So let’s go out for a night on the town with our old buddy DFS and have some fun on this week’s main slate!

Oftentimes we talk about how Mark Andrews has just as good of a shot to put up a big week as Travis Kelce. His usage is good, he’s the focal point of his offense, the targets are there. And he’s usually cheaper in DFS. Heck, last week if he just caught that easy TD pass he would have outscored Kelce. But this isn’t one of those weeks. Andrews is stuck in what should be a lame game (38 point over/under vs. the Broncos) and his quarterback is banged up. Travis Kelce on the other hand is part of this week’s premier shootout as they face the Cincinnati Bengals with an over/under of 52.5 points. So, if you are going to spend up on one of the top two options, it’s a Travis Kelce week. You might as well stack some Bengals in there too and play for the shootout. Kelce is 15.8% of your budget on DraftKings and 16.5% on Yahoo but only 14% on FanDuel so you get a little advantage on FD.

If I’m not paying up for Kelce, the other “elite” option is George Kittle and he’s quite a bit cheaper than Kelce. For instance, on Yahoo Kelce is $33 (16.5%) and Kittle is $21 (10.5%) so you’re saving a decent chunk of change there. Kittle still plays virtually every snap and runs every route but his success often boils down to the game script and the matchup. Last week we didn’t like him because the Saints are literally letting up the fewest DK points to tight ends of any team in the league. But this week they get the Dolphins who should not only force SF to throw but they are letting up the third MOST points to tight ends on average this year. The 49ers also will be missing Elijah Mitchell and CMC is banged up so conditions look pretty good. Kittle is roughly 10% on all three platforms so maybe you use Kelce on FanDuel but go with Kittle on the other two. Especially if you are trying to go against the grain by fading that Chiefs @ Bengals game.

There are three aspects that matter for tight end success. Talent, scheme, and opportunity. Some players don’t have the skill. Some players are in a scheme that doesn’t lend to their success (like when Adam Gase used to have his tight ends block on 25% of the pass plays). And some tight ends don’t have the opportunity (like being the fourth or fifth best pass catcher on the team. Pat Freiermuth honestly has all three but the one thing holding him back right now is QB talent. Kenny Pickett has been a fine game manager but throwing one touchdown pass over his last four games just isn’t cutting it for fantasy football. That said, Najee Harris is banged up and Atlanta is both a good tight-end matchup and a potential shootout destination so we’re rolling Freiermuth here hoping that he keeps his normal target share and finds pay dirt. He’s around ~9% of your budget on all three sites but a slight discount on DraftKings if that is a different maker for you.

Here’s the thing with Cole Kmet. There was a stretch where he was doing nothing. Then there was a stretch where he was being productive but was blocking on 8-9 pass plays a game (anything over 15% is bad and he was up at like 20-25%). But the last few games? His deployment has quietly been great. In back to back weeks he has played every single snap and only blocked on two pass plays in each of the games. He even managed six targets in the last game (though obviously the quality of the targets could be an issue depending on QB play). But, now that Darnell Mooney has been ruled out for the season, they really don’t have many other places to look, making Kmet one of the safer plays in a rough mid-level landscape. He’s 9% of your budget on Yahoo, 8.3% on FanDuel, and 7.6% on DraftKings. Yahoo and FD are both half PPR so FD or DK are the places to play him.

I know what you’re thinking here. How can I possibly recommend Evan Engram after the performances he’s put up lately? And, as always, I’ll remind you of this: you don’t have to play him. We give you two guys at each price point for a reason. If you can’t stomach this risk, don’t do it. But it’s ugly out here. And Evan Engram gives us a lot of reasons to say “at least”. At least we’ve seen Engram have a stretch of four games where he had between 6 and 10 targets. At least we saw Engram participate in 81% of the routes last week which was top five for tight ends. At least he faces the Detroit Lions this week which is not only a top 5-6 matchup at the position but the game has a 51.5 over/under which is certified shootout status. Sure, he could fall flat on his face again. But he’s only 6% of your budget on DraftKings (7.5% on Yahoo and 8% on FanDuel). So he’s worth that value tier stab. If he does nothing this week under these conditions, we probably won’t go there again.

You want to get sneaky? Let’s get sneaky. Everyone in their uncle is going to be looking for a sneaky way to stack up this Bengals-Chiefs game. The over/under is 52.5. While everyone is going for Travis Kelce or Hayden Hurst, you slide in with Noah Gray. He’s $2,700 on DraftKings which is just above the bare minimum and $10 on Yahoo which IS the bare minimum. How many other tight ends in this price range have four games in a row with multiple receptions? How many of them have even scored a touchdown this season. And here’s the real kicker - how many of them are playing over 60% of the snaps? Yes, the last two weeks in fact Andy Reid has embraced his inner Kevin Stefanski and run fairly heavy two tight end sets with Noah Gray playing 60% of the snaps in Week 11 and 66% in Week 12. Kelce played 63 snaps last week and Gray played 50. This is the move where you shock the world and Gray catches 3-4 balls and a touchdown (or two) and blows away that $2,700 price point. And, if you are really feeling froggy, maybe you play Patrick Mahomes, Travis Kelce, AND Noah Gray. Those unstoppable shovel pass TDs can go to anyone if you know what I’m saying…

You might be tempted to start Higbee with the matchup against the Seahawks as Seattle and Arizona are the two worst teams vs. the tight end. We think that’s a mistake. The usage for Tyler Higbee in terms of route running has changed drastically from the start of the season - last week he wonky ran 11 routes while blocking on five pass plays. And, even if he does run routes, we have evidence that shows that mobile quarterbacks do not target low aDot pass catchers as much as their pocket passing counterparts. That goes for both running backs and shallow running tight ends and it just so happens Tyler Higbee is outside the top 90 tight ends in aDot this season. Quarterback Bryce Perkins ran the ball over 400 times in his last two years in college so he’s not likely one to dump it down rather than keep the ball himself. Higbee literally was not targeted last week and he’s not even that cheap in DFS.

At surface level we might sit there and say “okay he’s the starting tight end, the slot WR is out, it’s a good matchup, it’s a shootout, he scored last week, etc.” And that is all true. But the reality with Foster Moreau is that he’s really just not that great of a pass catcher. This guy has been in the league four years and has plenty of opportunity yet has never had more than 67 yards in a game. Last week he played arguably the most tight end friendly defense, his team ran 77 plays which is well above average, they scored 30 points, and he touched the ball three times. Three. You are basically just chasing last weeks touchdown here and a LOT of other folks are going to be doing the same thing. Shoot for higher upside.