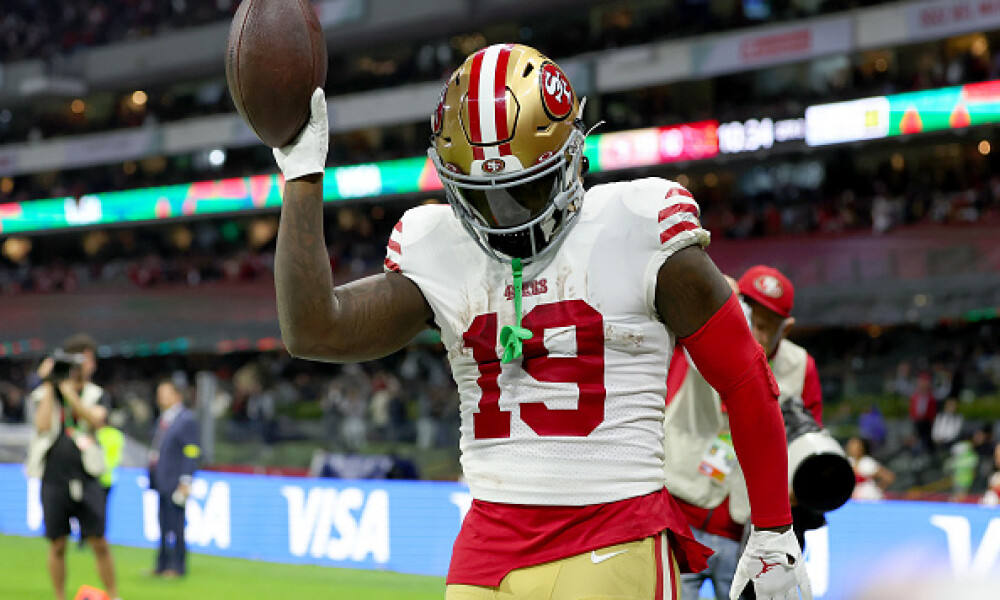 I love Thanksgiving week in terms of football. Family and friends? Well, they’re okay, I guess. However, NFL DFS multiple times this week? Sign me up, baby! For the Thanksgiving games, I’ll give you some of my favorite wide receivers for your daily fantasy football lineups, so that you can enjoy touchdowns on the screen with turkey (or another meat) on your plate! Then, we look ahead to Sunday’s main slate, and take a look at the wide receiver position, headlined by Las Vegas’ Davante Adams. From studs, to value plays, to mid-tier players, I got it all for you in this week’s DFS WR Coach. Here are my favorite DFS options at wide receiver for your Week 12 NFL DFS lineups, including my top receivers, best value plays, and receiver to fade.

The Lions have allowed the second-most fantasy points per game to wide receivers over the last four weeks, not to mention the most yards total. Detroit ranks 19th in DVOA against the opposition’s WR1, and while he only saw five targets last week, that was his lowest mark all season, and he was averaging 11.6 targets per game over the prior five games. It’s going to be hard not to play Diggs on this slate, because his immense upside and rather high floor is nearly unparalleled.

The Giants rank 25th in DVOA against the opposition’s WR1, and earlier this year, Lamb went for 87 yards and a score against this Giants defense. He’s averaging 77.6 yards per game against the Giants for his career, and while I expect Dallas to win, I don’t think it’s going to be a 40-3 shellacking that limits Lamb to five targets like last week.

Meyers is Mac Jones’ top target, and this is a good matchup for New England’s top receiver. The Vikings rank 26th in DVOA against the opposition’s WR1, and they have allowed the third-most receiving yards to wideouts this season. Meyers may not have immense upside, but he’s a good “floor” play, and he’s averaging 8.3 targets and 51.3 yards per game over his last three. Oh, the Vikings have also allowed the most fantasy points per game over the last four weeks to opposing receivers.

The Lions rank 26th in DVOA against the WR2 and the Buffalo stack is likely to be incredibly popular. Davis has a knack for big games in prime time scenarios, and his usage has ticked up of late, as he’s averaging 7.3 targets per game over his last four, compared to 5.2 targets per game over the first five of the season. Given the Buffalo offense and this juicy matchup, the Allen-Diggs-Davis stack figures to be quite popular on the slate.

I don’t love a good number of reps against Trevon Diggs, but Slayton continues to get it done. He caught five for 86 yards last week and was second on the team in targets with 10. With no Wan’Dale Robinson, Slayton could see a slightly expanded role, meaning that he could see six or more targets for the fourth time in his last five games. Don’t love the matchup, but it's hard to argue with Slayton’s role in the offense and recent production.

If you need some salary relief, look to Noah Brown. His production hasn’t been otherworldly over the last two weeks, but he’s playing over three-fourths of the snaps, and he was productive earlier this season. Michael Gallup logged just 62 percent of the snaps last week, but he hasn’t been overly productive since returning from his knee injury. This is a salary-saving play, allowing you to afford the expensive stack of Josh Allen, Stefon Diggs and more.

How do you not play Adams at this point? He has 100+ yards in five of his last seven games, and he has more games with over 100 yards than he does below that mark! While Seattle has surprised many this season, and Tariq Woolen has outperformed expectations, the Seahawks rank 24th in DVOA against the WR1, and Derek Carr only has eyes for Adams. The star receiver has 95 yards or a touchdown in all but one game this season. Talk about that for a fantasy floor!

Regardless of Ja’Marr Chase’s status, sign me up for Higgins this week. Tennessee has struggled with alpha receivers all season, and they’ve allowed the seventh-most fantasy points per game to the position over the last four weeks. Higgins has a safe role in this offense, and I expect Joe Burrow to have a monster game against this porous secondary, which will obviously benefit Higgins immensely.

New Orleans has been a bit stingy to receivers of late, but the usage is coming back for Samuel, and when the football is in his hands, regardless of the defense, he’s a threat to take it all the way to the house. Last week, he had nine targets and three rushing attempts, and he turned one of those carries into a rushing score. Over his last four games, he’s averaging 10.5 opportunities per game (8.0 targets, 2.5 carries), and the Saints are one of 11 teams to have allowed at least 10 receiving scores to wide outs this season. Interestingly enough, however, they are one of just four teams to have allowed multiple rushing scores to wide receivers… Deebo is scoring a touchdown this week. Book it.

McLaurin looks great this week. He’s seen at least seven targets in the last five games, and that should continue against Atlanta. He’s only faced the Falcons once before in his career, and he caught six balls for 123 yards and two touchdowns in that game. Oh, Taylor Heinicke was the QB in that game, too? What a coincidence! It may not be a repeat performance of that magnitude, but McLaurin is in line for another great day.

This game could move rather quickly, especially if both teams lean into a run-first approach, but when Cleveland does throw it, Cooper is going to be the guy. He’s averaging 8.3 targets per game over his last six games, and Tampa Bay is slightly below average in terms of DVOA against the opposition’s WR1. Also, this game is at home, and Cooper’s home/road splits this year are intriguing.

Sutton has 18 targets over the last two games, and if Jerry Jeudy misses another game, he could be in line for another game with eight or more targets. The Panthers rank 21st in DVOA against the pass this season, and they have allowed the 10th-most fantasy points per game to wide receivers. Sutton has been better in home contests this year, but this is another opportunity for a big game from the talented receiver and Russell Wilson’s No. 1.

I strongly considered Mike Evans, but if you need a bit of salary relief, you can save $600 on FanDuel and $700 on DraftKings by dropping down to Godwin. The talented receiver out of Penn State finally found the end zone for the first time in the team’s last game. While we haven’t gotten the monster game from Godwin yet, it could be coming, and the volume has certainly been there. Over his last five games, he’s averaging 10.8 targets per game, and now gets to face a Cleveland defense that ranks 27th in DVOA against the pass, not to mention in the bottom 10 against the WR2 and “other” wide receivers. There’s other receivers around Godwin I prefer a bit more, but he certainly could help you differentiate.

Metcalf in the value section? I know, but the price point is SUCH a good value for us, I had to put him here. Vegas stinks. Easy enough. They rank dead last in DVOA against the pass, and Metcalf has at least six receptions in two of his last three games. Metcalf is averaging over eight targets per game over his last three contests, and if he gets eight targets against Vegas, his return on investment this week is going to be insane. He’s very affordable in a good matchup, and coming off a bye, expect a fresh Metcalf to wreak havoc on Las Vegas.

With Kyle Pitts on the shelf, Drake London is the unquestioned top dog in the Atlanta passing attack. However, how much is that really worth? I guess we’ll have to find out. Even in a low-volume passing attack, London should get his fair share of targets, and he has found the end zone in each of the last two weeks. I could see Washington having some success against the Atlanta defense, forcing Mariota to throw it a bit in this one. If that’s the case, I expect London to put forth a solid day, and I think something like five or six grabs for 55+ yards and a touchdown is firmly in play for the rookie wideout.

Brandin Cooks got the long catch last week, but Collins leads the team in targets over the last two weeks, and he’s received at least seven targets in each game. His upside is capped because of this Houston offense, but the game script is in Collins’ favor, and they’ll be forced to throw it early and often. Also, if Davis Mills gets benched, it can’t be any worse for Collins, right?

A fluky 40+ yard reception where Cooks just got by the coverage man salvaged what would have been another pedestrian outing for the veteran receiver. His ceiling is capped due to the broken Houston offense, but he’s had numerous drops that hurt his overall numbers over the course of the season. He’s still disgruntled about not being traded, and we are slowly seeing Nico Collins establish himself as the WR1 of this team as it looks towards the future. Collins leads the team in targets over the last two weeks, and Collins is the only receiver you can “trust” in Houston. If you stack Dolphins in this game, Collins is the player to bring back on the other side, not Cooks.