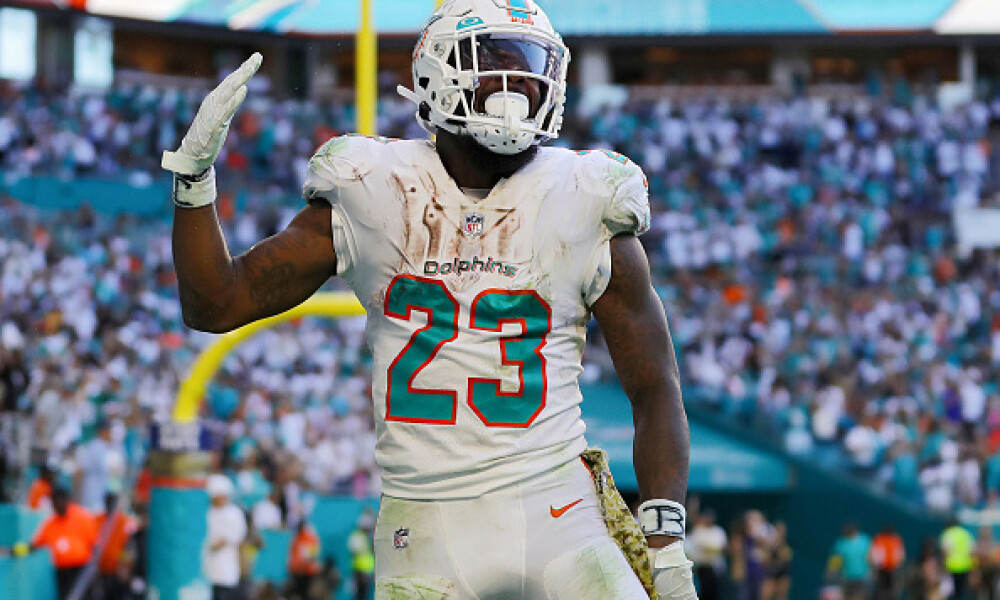 We flip the NFL DFS page over to Week 12 and this is an exciting week because it has the Thanksgiving slate as well as the main slate! So first of all, Happy Thanksgiving! I am going to provide a couple of plays for the Thanksgiving slate and then we will get down to the usual business of the main slate. David Montgomery scored north of 20 fantasy points as the cover boy last week, giving us three straight weeks of the cover player hitting that mark (Etienne in Week 9, Barkley in Week 10, Monty in Week 11). My two favorite plays this week are both cheap as I have my eyes on Jeff Wilson and Latavius Murray. Let’s dive into the top plays, values, and fades for NFL DFS action on DraftKings and FanDuel for Week 12!

Barkley is coming off an absolute disaster of a game in which he rushed 15 times for just 22 yards and caught just two of five targets for 13 yards to finish with just 5.5 fantasy points. However, he has been incredible this year and I think we kind of just throw that game out and not worry too deeply about it. He will look to bounce back in this primetime Thanksgiving matchup in what could turn into a battle of two explosive backs between Barkley and Pollard.

Pollard has been going bananas lately (as you can see in the picture below). Even with Zeke making his return to action last week, Pollard went ahead and had a monster game, racking up nearly 200 yards and 40 fantasy points. Pollard is in a groove right now and the Cowboys are feeding him the football (as they should), so go ahead and continue to fire him in your DFS lineups. The Giants are a solid matchup for running backs this season and there is little reason to believe that Pollard won’t continue to find success, both on the ground and through the air.

Cook is my dart throw, wild card play of the slate. He is coming off a career game in which he rushed a career-high 11 times for a career-high 86 yards. He didn’t catch any passes, but the Bills have shown they will throw him the football (and he did still have two targets, despite no catches). The Lions are a great matchup for running backs, despite shutting down Barkley in Week 11, and the Bills will put up a ton of yards and points against them this week. The Lions give up 416 yards per game and 28.2 points per game, both of which rank dead last in the NFL.

Ekeler is a pretty safe play, as he has scored at least 11.2 DK points in every single game this season (that low score came in Week 1) and his average of 23.4 points per game is the highest on the slate by a wide margin (Henry is the next closest with a mark of 21.8). He had a season-high 19 carries in Week 11 and he already has 69 receptions on 83 targets this season, which is just a very high usage in the passing game. He easily has the best matchup of any of the top-three priced backs as well, so everything is working in Ekeler’s favor this week.

Walker had his first real poor game on the ground in the Seahawks last game, but he ended up catching a career-high six passes on eight targets for 55 yards to still finish with a solid fantasy day. He has been great since taking over as the starter, scoring at least 12.2 fantasy points in six straight games, and that should continue this week when the Seahawks take on the Raiders. The Raiders are a top-five matchup for running backs this season and I expect Walker to be heavily involved and also fresh coming off the team’s Week 11 bye week.

Conner is back and getting very solid work. He has 13 targets over his last three games (hitting five in two of the games) and he has 35 carries over the last two games while finding the end zone three times in that span. He will continue to see heavy volume for Arizona and that bodes well for him in DFS this week with a strong matchup against the Chargers on tap. This matchup ranks as a top-three spot for running backs this season, so look for Conner to take advantage of it and produce a nice game at a mid-tier price.

The below image shows what Wilson has done in the two games since becoming a member of the Miami Dolphins and it is very impressive. He has fully taken over this backfield and rightfully so. His price tag is way too cheap for the way he is producing in this offense, especially when you consider the fact that the Dolphins are facing the Houston Texans. The Texans are giving up 178.9 rushing yards per game which is a full 25 yards more than the next closest. I really don’t see Houston being able to stop any part of the Dolphins offense this week.

Murray is coming off a strong DFS performance in which he scored 17.2 by finding the end zone and catching four passes. He has found the end zone in three of his past four games and is coming off a season-high 17 carries. He owns the Broncos backfield almost to himself now as the Broncos released Melvin Gordon and placed Chase Edmonds on IR. The Panthers rank as a strong matchup for running backs this season and I expect Murray to see a healthy amount of volume in this game, making him a very strong play at such a cheap price.

Patterson has been pretty awful over the last two weeks if you take away his kick return TD (I say that because you are not expecting to get one of those on a weekly basis when making your DFS picks). He would have just 9.9 TOTAL points over the last two games without that kick-return TD. He has just SIX targets over his last SIX games, which is pretty awful obviously. He just isn’t getting the volume that you need to see for a guy at this price, which means you have to really bank on him getting in the end zone a time or two just to score a decent point total. Add to that the fact that he has a bad matchup and it’s a pretty much no-brainer to fade him.