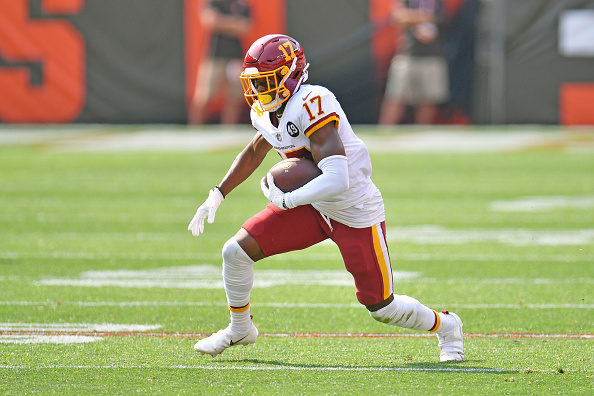 Between injuries, COVID and a surge in passing numbers around the league, the landscape for receivers continues to shift significantly from week to week. The tight end position is a mess outside of the top Travis Kelce and George Kittle , and while we will obviously continue to keep an eye on which tight ends are getting targets from week to week, I think I’m prepared to simply stream tight ends and hope that something sticks, if I haven’t been doing that already. Of course, things could change by this time next week, and we will be right back here to try to make sense of it all.

Kenyan Drake has five targets this season after he had 35 targets in eight games with Arizona last season.  If Drake doesn’t start getting more targets, I think I would wait for his next big game and then try to trade him. He is on pace for 20 receptions after he had at least 50 receptions in each of the previous two seasons.

Five touchdowns on 14 targets is a tough way to live, even in today’s tight end environment, but it is certainly possible Tonyan can keep up this Mark Andrews impersonation for the rest of the season. Just keep in mind that 11 of Tonyan’s targets came in the two games Davante Adams didn’t play.

Tyler Higbee is 24th in targets but 7th in fantasy points among tight ends. If anyone thinks he is still a fantasy starter, I would trade him for whatever you can get and then just stream the position. I’m not sure how much of a difference there is between Higbee and Tonyan, except that Tonyan has a better quarterback and less competition for red zone targets.

Julian Edelman was held to a season-low six targets for the second consecutive week, and if Cam Newton is out again, it will be impossible to trust him. Denver is 28th in fantasy points allowed to receivers, but I still won’t feel good about starting him this week.

Amari Cooper had a league-high 16 targets in Week 4, vaulting him into the lead for the season. He has proven incapable of performing consistently for fantasy, so if I could get top-five WR value for him, I would. I’m not convinced Dak Prescott will lead the league in pass attempts all season, and there is certainly a chance rookie CeeDee Lamb earns a greater share of the targets as the season goes along. I don’t think Lamb is necessarily a sell-high candidate, though I don’t really expect his streak of at least five receptions and 59 yards to last too much longer.

There probably isn’t any reason to expect Terry McLaurin ’s targets to drop off significantly with Kyle Allen replacing Dwayne Haskins, but I am hesitant to just assume Allen will be as willing to force-feed McLaurin as Haskins was. The best thing for McLaurin would likely be for Alex Smith to get the starting job, and the longer the rest of the NFC East remains awful, the more likely that becomes.

Logan Thomas had his worst game of the season in Week four, catching just one of four targets after he had four receptions and at least seven targets in each of his first three games. He only has 102 yards for the season, and Washington’s offense is unlikely to be good enough for Thomas to be a regular fantasy starter, but I am at least curious to see how he looks with Kyle Allen at quarterback.

Evan Engram was third among tight ends in targets last week, catching six of 10 for 35 yards. Like Thomas, Engram is hampered by his offense. Unlike Thomas, we have seen Engram have fantasy success in between his injuries.

Dalton Schultz and Austin Hooper played their way into the borderline TE1 morass with eight and seven targets respectively, though their numbers actually look a bit disappointing when you consider their teams combined for 87 points in Week 4. Shultz is averaging eight targets per game since Blake Jarwin went down, and I much prefer him to Hooper at this point.

A lot will be made of Rob Gronkowski and Cameron Brate with O.J. Howard out for the season, but it is important to note Howard only had 19 targets through four games. Even if all of those targets go to Brate and Gronkowski, I’m not sure there is enough here for fantasy, especially when Chris Godwin is healthy.

I think this is the last chance for D.J. Moore to keep himself in the realm of no-doubt fantasy starters. Moore has 10 targets total the last two weeks, and he still hasn’t found the end zone. I’m not convinced Robbie Anderson is the better fantasy option, though I will be if Moore has another quiet game against Atlanta.

Similarly, this feels like a make-or-break week for T.Y. Hilton against a Cleveland defense that is 31st in fantasy points allowed to receivers. Hilton hasn’t topped five targets since Week 1, and while I think I blame Philip Rivers more than I blame Hilton, it probably doesn’t matter to fantasy players who is to blame. I think I would give Hilton this game and Week 6 against Cincinnati, and if he doesn’t show significant signs of life, I would drop him during the bye week.

It is premature to add Damiere Byrd outside of super deep leagues, but if Cam Newton is out again, I will be keeping an eye on Bryd’s usage. It’s certainly possible Byrd just has some crazy kind of chemistry with Brian Hoyer .

The window for buying low on D.J. Chark has officially closed after Chark caught eight of nine targets for 95 yards and two touchdowns last week. The same might be true of Leviska Shenault, though it is worth noting his five receptions and six targets in Week 4 matched his season highs. The odds are this offense just isn’t good enough to support two pass-catchers, but if I am wrong, Shenault will almost certainly be the guy.