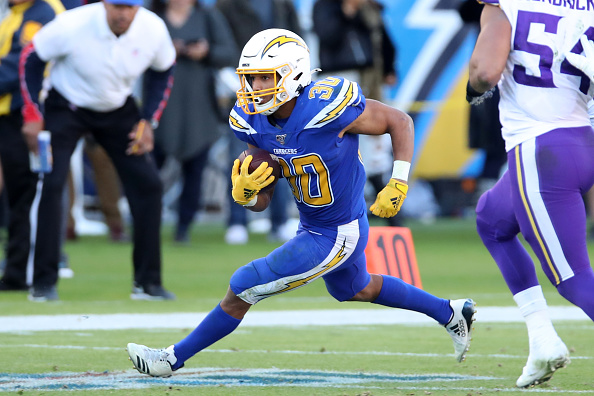 Welcome FANation to this week's running back workloads report. Unlike past weeks where we reviewed each individual team I am going to highlight some of the more notable performances from Week 12 that are worth breaking down and the players that should be on your radar not only for the remainder of the seasonal fantasy football season but for daily fanatsy football as well.

Austin Ekeler , LAC - Ekeler returned from IR and was immediately the most used running back on the roster as he played 72-percent of the offensive snaps against the Bills. Over those 72-percent of the snaps we saw Ekeler total 14 carries for 44 yards while adding 11 catches on 16 targets for 85 yards. In the last two games which Ekeler has been healthy he has seen a total of 27 targets go his way from rookie QB Josh Herbert. With a Week 13 matchup against the Patriots up next fantasy owners should expect to see elite volume from Ekeler heading into the fantasy playoffs.

Alvin Kamara , NO - Absolute nightmare scenario for those who roster Kamara as they have watched six rushing touchdowns go to different players over the last two weeks with four touchdowns by Taysom Hill and two touchdowns by Latavius Murray . It's clear that Taysom Hill is bad for business when it comes to Kamara stock and things do not seem likely to get much better until Drew Brees is back from IR. Over the past two weeks Kamara has failed to play at least 50-percent off the offensive snaps which have been his lowest snap percentages of the season.

Nick Chubb , CLE - The Browns are not holding back Chubb whatsoever since he came off IR. His Week 12 performance saw him nearly play a season high 61-percent of the team's offensive snaps. In the three games sine his return he has totaled 58 carries for 384 yards and two touchdowns. The Browns face a bad Titans defense in Week 13 and there is little reason to think that Chubb won't see this elite level of volume.

Kenyan Drake , ARI - After fatnasy owners were ready to cast him off durnig the early part of the season we have finally seen Drake really start to come on of late. Since returning from injury Drake has totaled 49 carries for 207 yards and three touchdowns while adding eight catches on 10 targets for 55 yards. With Kyler Murray 's shoulder potentially not 100-percent, fantasy owners should expect a bigger focus on the running attack lead by Drake.

Cam Akers, LAR - I know fantasy owners really want to be excited about the recent performances from Cam Akers and while it's been great to not just see him on the field but actually find the end zone in back-to-back weeks I am here to spread some caution. Despite his recent uptick in playing time, Akers has yet to eclipsed 30-percent snap share in any of the last four games. Last week he played  27-percent of the offensive snaps which was his most since Week 1 yet he still trailed Darrell Henderson and Malcolm Brown in playing time. Yes, Akers is getting his chances but he really needs to hit home runs with them when he gets the oppurtunity and that's a big risk for those heading into the fantasy playoffs.

Frank Gore , NYJ - Should you want anything to do with Frank Gore at this point? No, probably not, but we have to at least admire that the ageless wonder toted the rock 18 times for 74 yards while adding three catches for 12 yards in the Jest Week 12 loss to the Dolphins. With La'Mical Perine out with an injury it seems obvious that the Jets are going to ride Gore for as long as they can and in Week 13 against the Raiders he actually has a very solid matchup against a bad Raiders run defense that ranks 30th per DVOA.