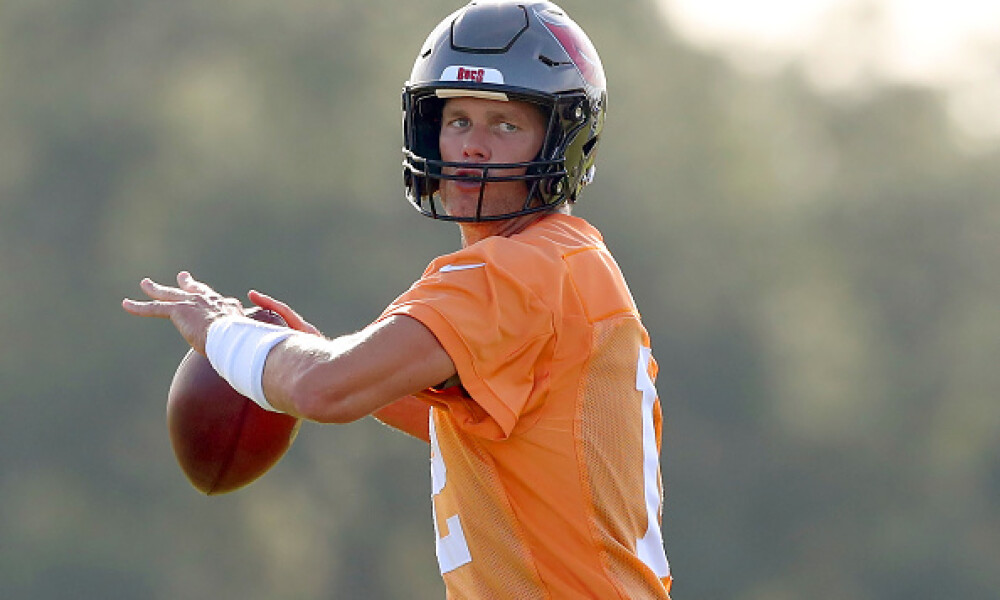 Who else is ready for the 2022 fantasy football season to get started? We scratched the itch last night with a couple of NFL Preseason games and we'll have even more teams getting onto the gridiron Friday night, Saturday, and Sunday. The NFL season can't get here soon enough and it's important to stay on top of all the latest fantasy football news, Training Camp storylines, Preseason performances, and NFL injury updates. We'll cover it all here with today's 2022 NFL Training Camp report focusing on the biggest headlines as you prepare for your fantasy football drafts. This report starts with the news of Tom Brady stepping away from Tampa Bay Buccaneers training camp for personal reasons. Plus, Tennessee Titans rookie QB Malik Willis made his NFL Preseason debut last night and could see his fantasy football ADP rise as a result. Then, of course, we have an update on Deshaun Watson and the Cleveland Browns' quarterback situation that could impact fantasy football player rankings and 2022 NFL pre-season projections. Don't forget to check out Fantasy Alarm's FREE Fantasy Football Draft Guide. Plus, our 2022 Ultimate Fantasy Football Cheat Sheet has been updated with new dynamic tier rankings by Andrew Cooper. Now let's dive into some fantasy football advice for the top NFL Training Camp news from the past 24 hours.

When you’re the GOAT and a five-time Super Bowl MVP, I guess you can do whatever you want in training camp. Tom Brady will step away from Buccaneers camp due to a personal matter until after the team’s preseason game on August 20th. Tampa Bay head coach Todd Bowles told reporters on Thursday that this was planned before camp started as Brady deals with “personal things.” Whatever these “personal things” are, Bucs GM Jason Licht said he’s not concerned with Brady’s absence. Though this headline doesn’t really impact fantasy football at all, it’s still worth noting that some of Tampa’s newer offensive pieces won’t have the next couple of weeks to further build chemistry with Brady. Those newcomers include Julio Jones, Russell Gage, Rachaad White, and Kyle Rudolph. Check out Bowles' full comments on Brady being away from the team.

Anyone else want to overreact to an exciting rookie's NFL Preseason debut with me?! Let's do it! Tennessee Titans rookie quarterback Malik Willis had fantasy football Twitter buzzing last night when he made some impressive throws and runs in his first preseason action. The Titan's third-round pick completed 6-of-11 passes for 107 yards and added in five rushes for 38 yards and a rushing touchdown. It should be noted that Willis was also sacked twice. However, the rookie's big arm talent and dual-threat running upside were on full display. Though Ryan Tannehill is still Tennessee's starter this year, Willis should be on everyone's radar in dynasty formats. Plus, who knows, maybe he'll unseat Tannehill at some point this season if he keeps making plays like these:

Could the Cleveland Browns Trade For Jimmy Garoppolo?

We’re all waiting to see where Jimmy G will land, and it appears the Cleveland Browns could be a trade suitor for the current San Francisco 49ers quarterback. Mary Kay Cabot of Cleveland.com reports that the Browns will consider acquiring Garoppolo if Deshaun Watson’s six-game suspension increases following the NFL’s appeal. As I’m sure you’re aware, the NFL has appealed for Watson to serve at least a one-year suspension – and that decision could come any day now. The Browns currently have Jacob Brissett slated as the starter in Watson’s absence, but Garoppolo would surely be an upgrade. For fantasy football, Jimmy G at QB would also benefit the pass-catchers in Cleveland. However, the offense is still likely going to be run-heavy and centered around Nick Chubb regardless of who is under center in Watson's absence.

Speaking of the Cleveland Browns' quarterback situation, we have another update on Deshaun Watson's suspension and the NFL's ongoing appeal. According to the Associated Press, Watson would be willing to accept an eight-game suspension and $5 million fine to avoid sitting out this entire season. It seems like Watson's defense team has been notified that the Browns QB will indeed be handed a full-season suspension just like the NFL is seeking with its appeal. This news “leaking out” could be a tactical ploy to let everyone know Watson is willing to accept a longer suspension – but just not TOO long. Hopefully we get official word on this soon, but it looks like a full-season suspension could be looming.

Denver Broncos running back Melvin Gordon has now missed two straight days of practice with a foot injury. NFL Network’s James Palmer reports the issue isn’t serious while Broncos head coach Nathaniel Hackett called it a foot contusion, per ESPN’s Jeff Legwold. It should go without saying that Javonte Williams’ fantasy football ADP would skyrocket if Gordon continues to miss time with this foot issue. For what it’s worth, the other running backs listed behind Williams/Gordon on Denver’s first depth chart are Mike Boone, Tyreik McAllister, and Max Borghi.

Stop me if you’ve heard this before: Rashaad Penny is dealing with another injury. Yep, the Seattle Seahawks running back is sidelined yet again – this time with “groin tightness,” according to head coach Pete Carroll. After giving an update to reporters on Penny’s status, Carroll then raved about rookie RB Ken Walker’s progression in camp. Seattle’s second-round pick is impressing his head coach with his pass protection, which could go a long way for Walker to stay on the field more often than not when the Seahawks have the ball. Carroll also said that Walker “can play all three downs. We feel comfortable with him.” The pass protection ability was one of the only knocks on Walker ahead of the NFL Draft, and rookies need to prove at least some level of blocking to play on passing downs at the next level. If he can do that, then Walker may take over the lead back role from Penny before long – especially if the former is sidelined with injuries all the time.

Remember when the Miami Dolphins traded tight end Adam Shaheen to the Houston Texans on Tuesday? Well, that trade is no longer happening because Shaheen failed his physical in Houston due to a knee issue. So now he heads back to Miami, but it's likely the team eventually cuts him before the season. Shaheen was listed fifth among the tight ends on the Dolphins' initial depth chart and he's surely not expected to take targets away from Mike Gesicki. As for the Texans, Pharoah Brown and Brevin Jordan now won't have to contend with Shaheen for snaps.