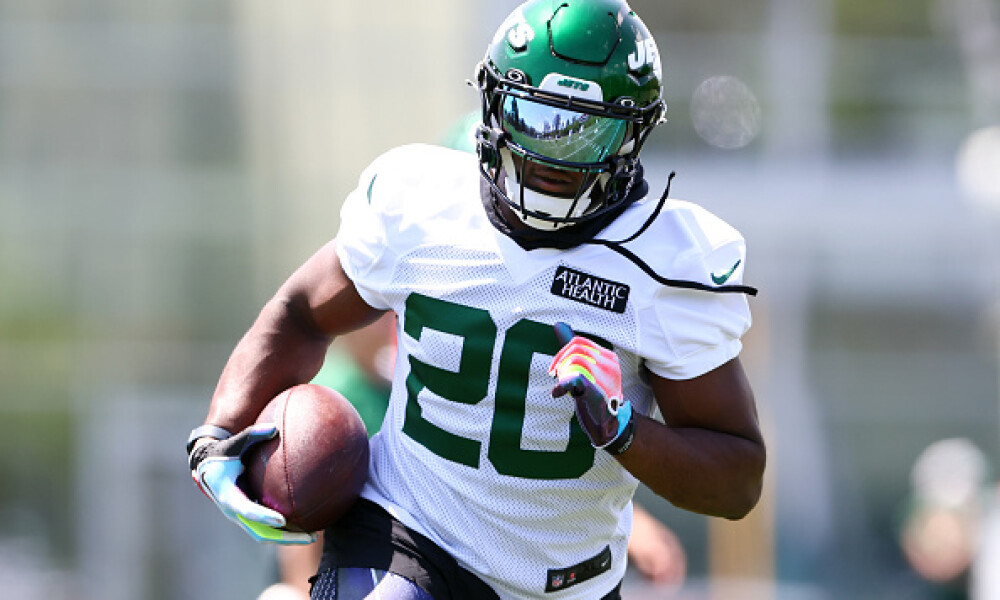 The fantasy football rookie coverage has been abundant here on Fantasy Alarm. We had full analysis of every pick and every player from the 2022 NFL Draft, including pre-draft team needs, positional breakdowns, and, of course, a full set of rookie rankings for 2022 Dynasty Fantasy Football Leagues. Our team brought you everything you could possibly need in order to familiarize yourself with this season’s rookie class. But as we approach fantasy football draft season for re-draft leagues, it is important to see how some of these rookies have fit in with their new teams. Who has the fantasy value and who doesn’t? Well, we’ve been through OTAs and mandatory mini-camp, so let’s take out the long-term look dynasty formats require, and just look at which youngsters will provide us with value for just this season. We’re not going to break down all of the – just my top 10.

The offensive scheme is going to remain as it was last season with head coach Robert Saleh and offensive coordinator Mike LaFleur bringing that west coast-stile offense over from San Francisco. That puts Hall front-and-center in and a run-heavy offense that leans on outside zone runs and uses the run to set up the pass. While Michael Carter is the incumbent, Hall is the more complete back and the expectation is that he will end up the early-down guy with Carter handling the third-down, pass-catching work. Eventually, the Jets hope to utilize Hall as an every-down threat, but the rotation of backs in this scheme is important to keep everyone’s legs fresh. There is a clear path to touches for Hall and the Jets are going to continue leaning on him even in Year One. With a strong offensive line, his fantasy value will be strong this season.

Given that Chris Carson is still recovering from November neck surgery and Rashaad Penny is just a whisper away from his next injury, Walker’s chances of becoming a lead back in this offense continue to increase. While Pete Carroll’s hiring of Shane Waldron was supposed to help increase the passing attack, the change in quarterback is going to likely push the scheme back to a more run-heavy scheme unless either Geno Smith or Drew Lock show the coach something powerful in camp. The same goes should a trade happen between now and the start of the season and either Baker Mayfield or Jimmy Garoppolo are under center. As Joey Cartolano said in his Rookie Running Back article, Walker is a decisive downhill runner which is something Carroll covets in his power-run scheme. Penny, when healthy, can handle the third-down work but Walker should be the workhorse.

After watching out the Bills phased out Zack Moss, it shouldn’t have been much of a surprise to see the Bills use a second-round pick on Cook. He served as the complementary back at Georgia and handled the pass-catching work, so we can probably expect to see him in that same role alongside Devin Singletary. However, we don’t want to pigeonhole Cook into that role because he is certainly capable of handling some early-down, between-the-tackles work as well. In dynasty league rookie drafts, Cook definitely has first-round written all over him, but for regular re-draft leagues this year, you may want to view him as a solid PPR asset but more in line as a handcuff to Singletary. Pass-blocking always seems to be the Achilles heel for rookie running backs, so keep an eye on him in training camp. It seems unlikely that he will ever take over the job completely, but he should see enough touches throughout the season to give him some value during the bye weeks.

If you draft Austin Ekeler this season, then you need to make drafting Spiller as the handcuff a serious priority. Remember what we have always preached – it’s the scheme in which we are investing and having the running backs in the Chargers offense is going to be huge. Ekeler will be the lead back in this offense and, as we witnessed last season, the only way the back-ups are going to see consistent touches is in the wake of an injury or a substantial enough lead that OC Joe Lombardi can give his start back a breather. It’s probably as important a handcuff as drafting Dalvin Cook and Alexander Mattison together. Spiller has the frame and power to go between the tackles, but, more importantly, he is a strong pass-catcher and has the speed, agility and lateral movement to turn the corner on the outside zone runs. The early returns on him for fantasy won’t be great, but the security of having him is going to make you feel great all year long.

If you’ve been listening to the Fantasy Alarm Show on SiriusXM Fantasy Sports Radio, you know Burks is a serious favorite for drafting this season. Robert Woods is still recovering from a torn ACL and both Nick Westbrook-Ikhne and Dez Fitzpatrick still have a long way to go before they can be considered reliable commodities. Even tight end Austin Hooper is new to the scheme and how plays develop. That puts Burks in a fantastic spot to be the team’s No. 1 receiver as early as this season. If Woods shows up to camp with no concerns for his knee, then maybe Burks is the No. 2 but either way, there is a very clear path to targets. What we are enjoying right now is all the focus being put on Burks’ asthma. So far, we’ve heard about it limiting him in OTAs and mini-camp and while it hasn’t dropped his ADP out of the top-40 of wide receivers just yet, we should start seeing a bit of a tumble as more people start drafting and buying into the asthma talk. Last year, it was Ja’Marr Chase dropping passes because there was no white stripe on the ball. The year before it was Justin Jefferson’s drops in camp. The public is riddled with panicky buffoons who live and die by the words of beat writers. If you don’t think Burks has been dealing with this asthma talk his entire life, then you just might be one of those buffoons. The rest of us will happily draft Burks at a discount and run away with our leagues.

The departure of Davante Adams, and Marquez Valdes-Scantling to a degree, has created a massive vacancy of targets in Green Bay and while the team has a hodge-podge of names like Allen Lazard, Sammy Watkins and Randall Cobb, Watson should fit in very nicely with this group and see a fair share of targets come his way. Some might say that Aaron Rodgers is going to lean on his veterans, but they are lumping him together with what we’ve seen from Tom Brady over the years. Rodgers isn’t like that. In fact, it was Rodgers who was the first to text the rookie when he got drafted. Why? Because the team finally got him a weapon he coveted. Here’s the deal -- we all know what Lazard is all about. He’s a great complementary receiver, not a No. 1. Watkins is good for one or two games at most before he either gets hurt or falls out of favor. The first being the more likely given his history. And Cobb is an over-the-hill slot receiver on his way out. Watson is, legitimately, the only guy on this roster who profiles as a true No. 1. He needs to remain humble and he needs to remain in close contact with Rodgers on everything the quarterback wants to do this year. Once they start connecting, the fireworks are going to start.

Targets, right? We’re looking for a clear path to targets right from the start and London, fits the profile. No, we don’t love Marcus Mariota as being the guy under center, but given the way this receiving corps looks, someone is going to have to be the leader of the target. Tight end Kyle Pitts could end up the guy who sees the most targets, especially if he is lined up in the slot more, but London figures to see a prominent role, ahead of the likes of Olamide Zaccheaus and Bryan Edwards. He’s got the size and hands to produce in the vertical passing game, as well as the speed and stealthy chops to work out of the slot and go across the middle. The Falcons made him a priority, taking him at eighth overall, and many actually believe he is/was a better NFL prospect than either former USC teammates Michael Pittman and Amon-Ra St. Brown. The Falcons may be rebuilding and have some growing pains along the way, but they will also be playing from behind a ton which could put the ball into London’s hands even more.

Plenty has been made of Olave and former Ohio State teammate Garrett Wilson since the two were drafted, but while I like Wilson’s skill-set a little bit more, the path to targets seems to favor Olave just a bit. A lot is going to hinge on Michael Thomas and what he ultimately decides to do, but until he steps into camp, the focus remains on Olave and newly-acquired Jarvis Landry. The former Buckeye has elite speed and great athleticism, but may need to get a little more physical as the one knock has been his ability to gain separation. Opposing corners are going to start jacking him up on the line, so he’ll need to learn better on how to push through. Another big key here, and another reason he gets the nod over Wilson, is the likelihood that Alvin Kamara gets suspended for the six games being rumored right now. When that hammer eventually drops, the Saints are likely to turn a little more pass-heavy, given their current running back corps. That should mean that, with or without Thomas, Olave should be on the field seeing plenty of targets come his way.

With recent reports saying that Michael Gallup, recovering from an ACL injury, is a question mark for Week 1, Tolbert could end up playing a very active role in the early part of the 2022 season. CeeDee Lamb remains the top dog in this receiving corps and the addition of James Washington gives them some speed on the outside, but Tolbert could be the wild card here as his speed, athleticism and route-running skills allow him to line up both in the slot and on the outside. He comes from a small program at South Alabama, so he is going to have to prove himself every step of the way, but considering how much Washington struggled to establish himself in Pittsburgh, Tolbert’s current spot on the Cowboys depth chart might not be too big a hurdle to overcome.

This was probably the toughest part of the article right here. Wiliams is still recovering from a torn ACL suffered in January and the latest reports have him coming back in late September/early October. That can be worrisome as he is not in camp working with Jared Goff like Amon-Ra St. Brown or DJ Chark are right now and those two already profile as the top two wideouts for this offense. Should we have put Garet Wilson ahead of him? For the time being, no. We’re going to put overall skill-set and talent over opportunity just by a smidgen over here. Wiliams has the size, hands and route-running ability to be an immediate impact player once he returns, so he gets the slight edge. Just keep in mind, if you don’t have any IL spots on your roster, you are going to have to eat a bench spot for at least 4-to-6 weeks. If that’s something you can handle, then give it a go.