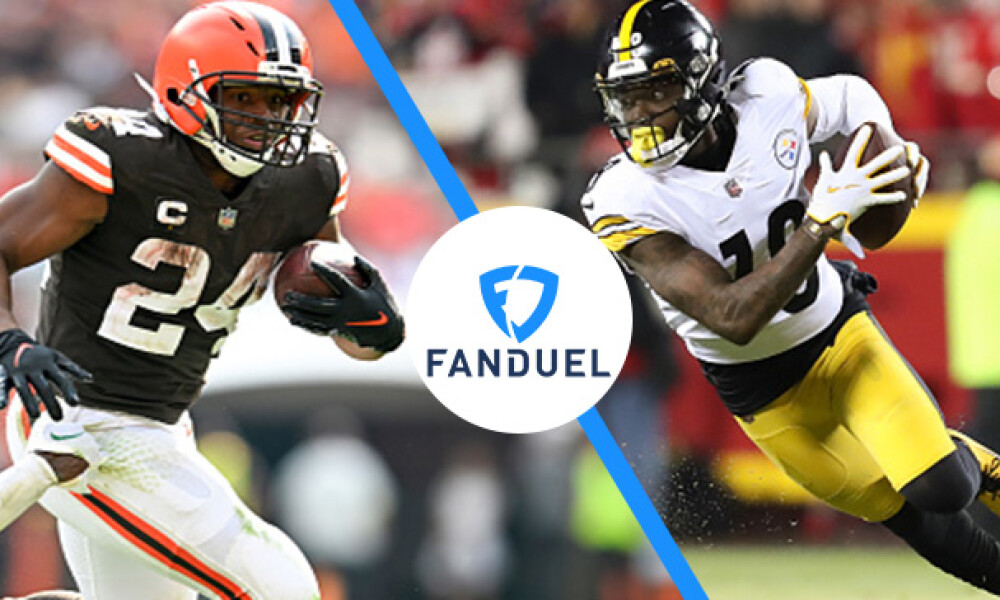 Week 3 of the NFL season is here and there is no better time to dip your toes into the DFS waters than with tonight’s NFL DFS Thursday Night Football Showdown slate featuring the Pittsburgh Steelers and the Cleveland Browns with their featured NFL Thursday Million contest which costs $9 to enter and pays out $200,000 to first place! Make sure to use our NFL DFS Lineup Generator and NFL DFS Player Projections when building your lineups tonight!

When it comes to building your Showdown DFS lineups a big part of the puzzle is getting the MVP player correct. With FanDuel the MVP slot earns 1.5x the points as the general flex positions, meaning they scoring is worth more. Check out my top MVP plays for Thursday’s Showdown slate between the Chargers and Chiefs.

This one should be obvious. He is the most expensive player on the board. He had three rushing touchdowns last week against the Jets. The Steelers have struggled to stop the run, which included last week where Damian Harris had a strong game against them. There is also a weather factor in play here where there are reports that wind gusts could reach 30 MPH which would naturally make it a bit more difficult to throw the football.

So, I think you can actually play both of the Browns RB's tonight but if you wanted to pivot off of Chubb then Hunt is a must play here as well. He scored two touchdowns in Week 1 to show he is more than capable of having a leading fantasy week out of this shared backfield.

The Browns have a good secondary, or so we thought, but we saw rookie Garrett Wilson have himself a big day in Week 2 and in Week 1 it was Robbie Anderson who finished with a big score, thanks to his 75-yard touchdown, but still, plays are being made against this secondary. Johnson leads the team with 22 targets through the first two weeks of the season.

Defenses aren't always the best play for your MVP spot but this could certainly be the exception. The Steelers offense is clearly limited and now they go on the road to face a Browns defense that has a decent secondary and a solid defensive line as well. Mitch Trubisky is no stranger to the turnover and taking the sack. This game may also be poor throwing conditions which should keep the scoring low.

This feels like the perfect game for Freiermuth to find success. Tyler Conklin of the Jets had seven catches on nine targets in Week 2. Freiermuth is second on the team in targets through the first two weeks and is a big red zone presence. Again, if weather impacts the passing game today then the intermediate and short dump offs to the tight end may be in store for the Steelers offense tonight.

Cooper was basically a non-factor in Week 1 against the Panthers, finishing with three catches for 17 yards. He then exploded against the Jets for nine catches, 101 yards and a touchdown. The Steelers do have a good secondary which has me shying away a bit from the Cleveland pass catchers here but if you wanted a contrarian option that has the talent to make plays then Cooper fits.

The Browns run defense has been good this season, having success against both Christian McCaffrey and the Jets duo of Breece Hall and Michael Carter. The Steelers offensive line still has trouble and Harris himself still doesn't look 100% healthy. It was great to see his pass game involvement in Week 2, finishing with five catches for 40 yards after he saw on two targets in Week 1. His price point will make him another contrarian play today.