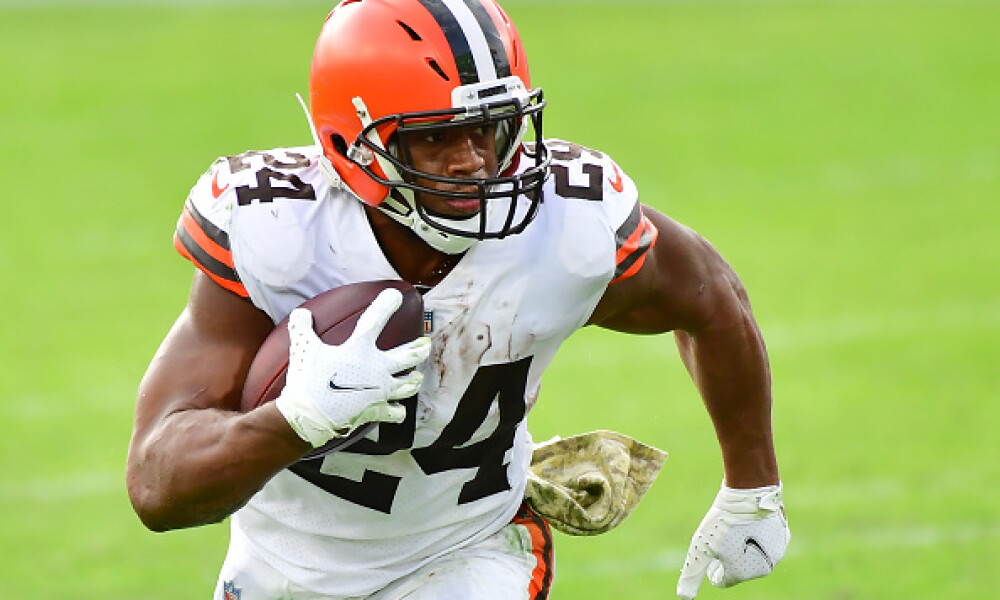 NFL Week DFS 3 kicks off tonight with a good old-fashioned AFC North rivalry on Thursday Night Football as the Pittsburgh Steelers head into Cleveland to take on the Browns. The battles these two teams have fought have been epic over the years, dating back to 1950, and the intensity of the games I just as strong today as it was back then. But you’re not looking for history. You’re looking for top DFS plays for tonight’s Showdown slate. You want to know if you should roster a banged-up Najee Harris. You want to know if you should roster Nick Chubb or Kareem Hunt. We’ve got you covered. You’ve got a full rundown of players and suggestions below and you can always take a look at our Weekly Match-Up Report and use NFL DFS Tools like our DFS Lineup Generator (a.k.a. the DFS lineup optimizer). We have everything you need to build a winning DFS lineup.

Now before we begin, for those who are new to the process, please take a moment to understand what exactly you are getting yourself into by playing single-game Showdown Slates. We love to have some skin in the game, for sure, but these slates are, for all intents and purposes, a lottery ticket. Sure, there are times when the chalk hits and everyone shares in the prizes, but, more often than not, you need to hit on that random dart-throw that differentiates your lineup from that of the herd in order to claim the top prize. As a result, we encourage you to play responsibly and not over-invest. Stick to the GPP contests (single-entry preferred), don’t blow your whole bankroll, and understand that, unless you are a max-entry player, you should prioritize having fun.

Nick Chubb, RB CLE – It’s not just about having a three-touchdown game. It’s about Chubb being the best running back in the NFL. Have you ever watched this guy run? Give him a consistent 20 touches out of the backfield each week and this guy is leading the league in rushing yards and touchdowns every year. He’s that good. So why doesn’t Kevin Stefanski lean on him more? That’s the million-dollar question. The Steelers are giving up 128 rushing yards per game through the first two weeks and we know the Browns want to run the ball to assert dominance and keep the pressure off their quarterback. That screams captain’s seat for your lineup.

Mitch Trubisky, QB PIT – The Browns secondary is their most vulnerable part of their defense and if we expect the Browns to run heavily with Chubb, we are expecting the Steelers to have a need to throw. Cleveland’s DVOA coverage numbers are weak, they’ve allowed almost 260 passing yards per game, five touchdowns through the air and opposing quarterbacks have posted a 101.6 passer rating against them.

Diontae Johnson, WR PIT – With 22 targets over the first two games, Johnson is clearly the primary target for Trubisky and that should continue Thursday night. The match-up against Martin Emerson could be a tough one, as he is a big, physical corner, but Johnson always seems to find a way to gain separation and sit alone downfield. They’ll try to move him around and get him opposite a struggling Denzel Ward, so expect an active game from him.

Najee Harris, RB PIT – The Browns front-seven has been a beast when it comes to stopping the run, as they’ve allowed an average of fewer than 80 rushing yards per game. But Harris is very much in-play tonight because of the volume he sees. We have been assured that the foot is fine and while some may shy away because of it, the fact that he saw 15 carries and six targets against the Patriots should tell you he is fine. The offensive line is struggling, which is why Harris is not getting captaincy consideration.

Kareem Hunt, RB CLE – You always have to take a look at Hunt, even though this game screams Nick Chubb. Kevin Stefanski is notorious for having Chubb do all the heavy-lifting between the 20s and then start with the gimmicks inside the red zone. It’s a terrible way to coach, but we’re trying to build a lineup off what we expect to see, not what we want to see. Hunt is worth a shot, especially if you believe the Browns will keep it on the ground most of the night.

Chase Claypool, WR PIT – We could see a boost in targets for Claypool tonight, given the physical mismatch in coverage between him and slot-corner Greg Newsome. He’s only seen six targets per game and hasn’t exactly done a lot with them, but this could be the night things click for him. Claypool is also seeing a bit of rushing work as everyone in the NFL is looking to move someone into that “wide-back” role, so when the Steelers are looking to fool the Browns front-seven, he should get mixed in a little more.

Jacoby Brissett, QB CLE – We aren’t expecting a whole lot of passing work from Brissett tonight, but if things go sideways and the Steelers actually take control of this game, Brissett may be leaned on a little more than usual. The Pittsburgh secondary has been tough, already grabbing five interceptions, but they have also allowed an average of 275.5 passing yards per game. Brissett’s numbers haven’t been huge through two games, but he’s not much more than a game-manager, so don’t expect the world.

Amari Cooper, WR CLE – It’s not like the Browns are going to give Chubb and Hunt 40 carries between the two of them so you have to look to Cooper for whenever Brissett drops back to pass. The Steelers secondary has been doing a lot of ball-hawking already, but that can backfire and cause them to give up the big play downfield. I don’t expect a ton of targets for Cooper, but I do expect him to be productive with the ones he gets.

Pat Freiermuth, TE PIT – Trubisky has leaned on Freiermuth plenty this season already and that should continue as he looks to move the chains downfield. Freiermuth has seen 17 targets between the two games, multiple red-zone looks and has wrangled in one touchdown. If the Steelers are inside the 10-yard line, you can expect Trubisky to look for his big-bodied tight end to finish it off.

Donovan Peoples-Jones, WR CLE – He went from 11 targets in Week 1 to one target last week. So goes it for Peoples-Jones and we honestly do not see a whole lot of consistency from him. That being said, he’s got the size and speed to stretch the field and if the Browns find him in one-on-one coverage, they’ll take that deep shot down the field. It’s a little better than a dart-throw, but if we are reading the game script correctly, it’s not by much.

Browns D/ST – The Browns defensive strength is with their front-seven who have already generated six sacks, a number of QB-pressures and have two takeaways on the season. This game is going to be intense, but given the Pittsburgh struggles on the offensive line, the Browns defense could be wreaking havoc and adding points to your lineup.

Steelers D/ST – Pretty tough to argue against seven sacks, five interceptions and a forced fumble, right? Pittsburgh has gone 4-2 over their last six regular season games against the Browns and are 5-1 against the spread. If that trend is going to continue then they are going to have to be opportunistic on defense.

George Pickens, WR PIT – I like Pickens as a dart-throw to pay down this week given the match-up on the outside. We expect him to see plenty of Denzel Ward tonight, so when Trubisky is looking to take some of those deep shots downfield, this might just be the match-up you want a piece of in your lineups. Pickens has the speed to not only stretch the field, but to gain some nice separation in one-on-one coverage.

David Njoku, TE CLE – The Steelers haven’t given up much to the tight end position this season, but you just never know what Stefanski is going to do once he gets into the red zone. Njoku’s targets have increased from game-to-game and he saw two red-zone targets last week, one which almost resulted in a touchdown but his foot went out of bounds. In the realm of “you never know,” you never know.