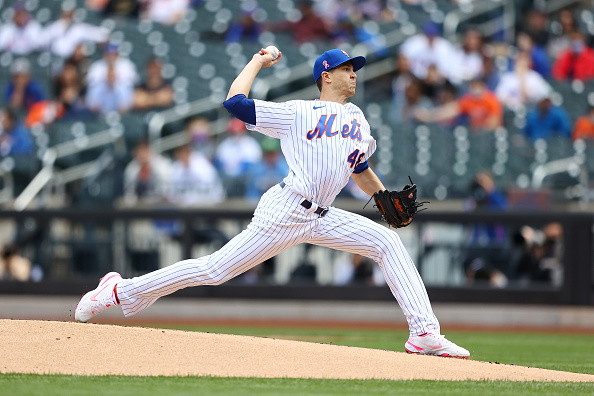 The upper tier is fully populated with excellent options to pursue a pair of great starts this scoring period. It has been a long time since we beheld a dozen and a half arms with excellent two-start prospects. That, of course, means less to choose from in the middle tier and thankfully, the bottom group.

Great to see the return of Mets ace deGrom this week, but temper expectations, as the management in New York is being somewhat wishy-washy about exactly when the best SP in the game is taking his turn in the rotation. Means continues to reward those who took a late round option on adding him to their rosters, and Kluber is rounding into form of late, thankfully. Enjoy the wealth this week, it is not likely to recur on a regular basis.

Toss a no-no, and you end up atop the middle tier, Mr. Turnbull. Turnbull has developed into a stable member of the Tiger rotation, after a shaky start. Over his last two starts, he has put up a pair of consecutive quality starts (QS), the last being a gem where he collected nine Ks and generated a huge percentage of groundballs. A pair of home starts on the slate is a positive feature for the 28-year-old righty.

Montas has only tossed a couple of bad games this season, but he is still working to repair the damage from the opening game where he was tagged by the Dodgers to the tune of seven earned runs over just 2.2 IP. He has allowed just five earned runs over his last three outings, collecting 16 Ks while allowing just five free passes over those 16.1 IP. Two home starts against teams that are under .500 on the road portends good things continuing for the righty in his sixth MLB season.

Hill has produced superb ratios over his last five appearances, posting an attractive 0.98 ERA and 0.80 WHIP. Add to that a 10.1 K/9 rate, and you have a SP that should be owned in more than 50% of leagues (44% ESPN, 47% Yahoo). These are not the best matchups on the board, but not the worst, and he is backed by a strong offense.

Gant, the Card’s 28-year-old righthander, evened his record to 3-3 with a victory in his most recent trip to toe the rubber against the visiting Pirates, although in doing so, he raised his ERA to a still spectacular 2.04. His WHIP is an ugly 1.56, buoyed (or sinking) by the extravagant 28 walks he has allowed over his 39.2 IP to date. Improved control would certainly raise his status among the middle tier SPs, although he has never been a great command and control arm in his career.

Dunn has not yet managed to pitch a complete six inning game this season, which limits his usefulness, despite a satisfactory 3.63 ERA over his seven starts in 2021. Although he is an average K producer, as with the Cardinal SP profiled above, his control diminishes his value as he has allowed a total of 22 walks and 24 hits over his 34.2 IP this season (1.33 WHIP). The matchups are neither great nor awful, but his metrics (4.81 FIP, .222 BABIP, 80.2 % LOB) all hint of a coming negative regression in his future.

Peacock joined the Diamondback rotation due to injuries plaguing the starting staff, and is slated to take the ball twice this coming week, both home games. As he faces two first place teams, that potentially plays in his favor. He will rely on his ability to generate groundballs, as he is a below-average strikeout producer. A 1.23 BB/9 rate also plays in his favor, even against the scheduled opponents in Week 9.

Gomber gets to ply his trade on the road away from Coors Field, but his home park has been a friendly venue for the 27-year-old southpaw this season so far. His second start is looking far more favorable as an occasion to plug him into your rotation, as opposed to taking on the Mets at Citi Field. His strikeout per inning production is a plus on his ledger (9.3 K/9 through 45.1 IP).

Irvin is coming off his worst start of the season, harkening back to his first two appearances in 2021 when he was tagged for four earned runs by the Astros in back-to-back starts. No surprise that the source of his most recent troubles was the same squad from Houston. This week, fortunately, he has a pair of different opponents that provide better matchups for his control-oriented approach on the bump (1.7 BB/9 over his 52.2 IP in 2021).

Keller winds up the middle tier, and fortunately for him based on his home/road splits, is taking the mound for two road games this coming week. He trends dangerously close to being a bottom-tier arm, and should only be used for either of his two starts if you are desperate for innings or limited counting stats.

This group of a dozen arms consists of those not recommended for either of their starts this week. If you are desperate for innings, perhaps cherry-pick one or two of these SPs for their better matchup, but looking over the slate, discretion suggests that none should be given strong consideration, if you value your ratio and counting stats. Employ the services of any of these pitchers at your own risk.

Garrett has gone 4-0 with a non-decision over his past five starts for the Red Sox, and has posted an admirable 2.27 ERA and 31:9 K/BB ratio over that stretch, as well. The 1.26 WHIP is pedestrian, and there is a concern in that his home/road splits definitely favor his production away from Fenway Park thus far this season.

The Philly righthander was scratched from his most recently scheduled start due to a numbness in his right index finger, so there is no guarantee he will toe the rubber in this contest against the host Marlins. Assuming he does take the mound, look to capitalize on some strikeout production, with his 11.4 K/9 rate over 29.1 IP in his back pocket.

Garcia is another hurler you can turn to for K potential, as he has been whiffing opposing batters at an imposing 11.9/9 rate over his last five outings. The 3.60 ERA and 1.04 WHIP over that period is also attractive to those fantasy owners looking to plug an arm in for a short-term fix to their rotations, although if he continues to proceed apace, there is little incentive to drop the second-year righty.

Both sides of the starting options in this game have interest for those looking to stream a starter…or two in Week 9. The K numbers are excellent for both hurlers, although the Texans’ righty features better control and ratio stats. Both these SPs have underlying metrics that suggest they have been a bit unlucky to date and could be in line for some positive regression to the mean.

The 31-year-old southpaw twirled his third consecutive QS against the visiting Pirates, although he did yield two long balls that cleared the fences in that contest, a trend he had been controlling since his early struggles to open the season. He has been more of a road warrior of late, so the trip to Fenway is not daunting.

The matchup against the surprisingly powerful Giants is not the best, but Kelly has been much better at home than away from the desert. He has been slowly and steadily driving down his inflated ratios, and has tossed three QS out of his last five starts, with the other two appearances falling one out short of sufficient time on the hill to rack up more QS. He is just an average K producer, but the Giant team is populated with free-swingers.

Another weekday, another batch of streaming options. Anderson had probably his worst outing of the season statistically in his last trip to toe the rubber against the Giants, when he allowed four earned tallies to accrue against him. Prior to that, he was adept at keeping games within reason, having only allowed more than two earned runs in his first two starts of 2021. The Cubs are certainly a good matchup away from Wrigley Field.

Fleming sports some eye-opening ratios, with a stellar 2.34 ERA and 0.98 WHIP through his 34.2 IP this season (four starts). Makes up for the K rate, which is not even bordering on pedestrian at 5.5 K/9. He does have good control, though, and generates a ton of groundballs, helping him keep the ball in the park.

Sheffield picked up this third victory in his last start, holding the visiting Cleveland lineup to just two earned runs through 6.0 IP, also giving him his third QS of the season. The below average strikeout rate (7.2 K/9 over seven starts comprising 39.0 IP) limits his utility as a regular SP in your rotation, but pitching at home against the Rangers has potential for streaming purposes.

Both sides of this matchup are intriguing, although the Miami righthander Poteet has a limited sample size to his credit. Granted he has been effective, allowing just two earned runs over 10.0 IP. Alternatively, Perez has allowed just four earned runs over his last four starts, dropping his ERA to a serviceable 3.40. Neither is a superior source of Ks, but both arms are serviceable options if you need a late week SP to plug in.

The 30-year-old righthander has been at his best this season away from Arlington this season, and he has a decent matchup against the Mariners in this outing, a team where his average K rate could yield decent numbers. He is coming off his second QS of the season, and has not allowed a dinger the past two games, an issue early on this season for the veteran.