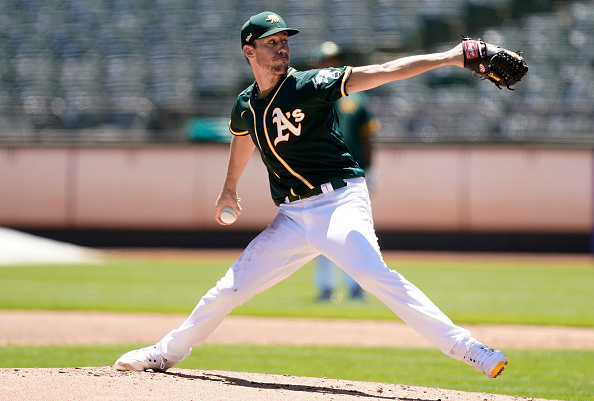 There are plenty of top-notch dual start options to choose from this week, although many of the top tier will not be available in your leagues if you did not draft them. The middle tier, however, has a few arms that you might just have the opportunity to snag off the waiver wire. Pick well and prosper in this shortened MLB season.

These 14 hurlers offer the best options for two-start goodness heading into Week 5. The last entry, Freeland, makes the top tier due to his pitching on the road, away from Coors Field, in both his scheduled mound appearances this coming scoring period. The others are safe(r) options to rely upon for both starts, no matter the opponent or venue.

Bassitt had been seeking his second consecutive quality start (QS) but a homer to Anthony Rendon with two outs in the sixth put the kibosh on those plans. He still is sporting a useful 2.42 ERA and 0.90 WHIP in the ratio stat categories, and his 19:4 K/BB ratio indicates just how effective he has been while toeing the rubber this season. He has a pair of good matchups in store this scoring period, especially facing the Angels at home to wind up the week.

Montgomery collected his second win in three decisions by defeating the Braves at home, although it was not exactly a stellar effort. He allowed Atlanta to chase him with a three-run shot in the sixth, and that continues his trend of allowing one homer each start so far this season. He does show good control, helpful given his subpar strikeout rate of 5.7 K/9 thru 15.2 IP. At least his matchups are good this week, with Boston visiting the Bronx to open Week 5, then the trip to wind down the scoring period across town to be entertained by the Mets.

Cease was roughed up in gathering his third consecutive victory, although four of the five runs allowed to the Tigers were unearned. His advanced metrics hint at a negative regression on the horizon: 6.28 FIP (opposed to an apparently attractive ERA of 3.26) and .286 BABIP, together with an unsustainable 82% strand rate. He does get the Tigers at home for his first start of Week 5, though a trip to the North side of town to take on the first place NL Central Cubbies is not a preferred matchup to wind up the scoring period. Might be prudent to use him for just one of his two scheduled times to throw the opening pitch.

Senzatela is coming off a rough outing at home against the Diamondbacks, so the Week 5 dual road starts look initially favorable, getting him away from Coors Field and a recent five earned run no-decision. As with Cease above, his second start is the less favorable matchup coming up this week, and discretion might indicate that he is better as a one-start option. He is an average at best K producer, and neither of the opponents stands out as likely to improve on those results.

Peterson collected his second consecutive victory (third on the season against one loss) by holding the visiting reigning World Champs to one earned run on one hit and two free passes, with three Ks. He lowered his ERA below 3 (2.91) with the effort, and now heads to Miami and then back home to take on cross-town rivals the Yankees to wind up the week. Not great matchup potential, but if he shines, then he may just graduate to the top tier his next two-start week.

Perez is on the road for his two trips to the mound this scoring period, and in a small sample size, has relished his role as visiting hurler this season. He has struggled with his control, and offers below average K potential, so counting stats are not what he offers his owners. Aside from a rough opening outing, albeit against the Orioles who he faces to wrap up the scoring period, he has been dependable as a SP, though. Faint praise, to be sure, but praise nonetheless.

Davies is set to face a pair of essentially .500 teams, with the Astros just a game below that mark as this is being written, so the matchups are not horrible. He is offering nice ratio stats with a 2.78 ERA and 0.84 WHIP through his 22.2 IP over four starts, and the 18:3 K/BB ratio signifies good command and control, to boot. He is a steady option who is available in most leagues (27% Yahoo ownership, 25% in ESPN leagues). Claim him for the two-start week and consider holding him while he is pitching effectively.

Cobb is now the ace for the Orioles, with John Means on the COVID list, and he has been pitching well for Baltimore, featuring an attractive pair of ratio stats: 2.75 ERA and 1.07 WHIP over his 19.2 IP on the season. His Ks come and go in his appearances, and based on the opponent numbers, look for a good outing in terms of whiffs against the visiting Red Sox, not so much when he faces Toronto in his first outing in Week 5.

Minor was limited to just four innings in his last outing, a conscious decision by the team to limit his pitch count, and he responded with four scoreless frames of one hit ball. He did yield three walks, though, so there is that issue to consider. He gets the Padres at home, and then another good matchup against the Mariners on the road, making him a consideration based on the dual start status this week, both opponents likely to add to his K numbers.

As usual, this collection of pitchers consists of those that you want to avoid, even with the apparent allure of a pair of trips to toe the rubber in Week 5. It bears repeating, in a limited season, you should try to avoid rostering and starting any pitcher that is not likely to give you ratio and counting stats that benefit your bottom line. If you absolutely want to start one of these SPs, the Canning against the Giants at home is your best bet, but really, you should not gamble with your fantasy stat line that way.

Keller has yet to yield a run, earned or not, this season. Small sample size, admittedly, with only two starts to his credit in 2020, but he did shut down the Reds in his most recent trip to toe the rubber over six innings. There is the concern about his propensity to hand out walks, with an inflated 4.1 BB/9 on the season, so he has not been helping himself in that capacity, and if it continues to be an issue, it will surely rise up to hurt his ERA at some point.

Lopez leads off the big day for streaming this week, although he does not have the premier matchup by any stretch of the imagination, taking on a team that handed him his lone poor outing this season and their ace. Still, a 10.7 K/9 rate coupled with a 4.75 K/BB ratio over three starts comprising 16.0 IP bodes well for counting stat production, especially against a Met team that currently ranks sixth in whiffs produced.

Another poor matchup on paper, Walker at least gets a home start when facing the Dodgers and their SP1. Walker has been up and down in 2020, but his missteps have been away from the home park, so there is that on the plus side of the ledger on Wednesday.

It is not often that an Oriole SP is considered a good streaming option, especially at Camden Yards, but the veteran southpaw has been striking out a batter per inning this season, although that rate suffered against the Nationals and the Blue Jays are a similarly patient hitting team, so do not bank on significant K numbers in this contest. This recommendation is more about matchup than anything else.

Any SP taking on the Giants has a positive factor, given their struggles to start the season, although it is not like the Angels have burst out of the gates, either. Sandoval is certainly available, owned in just 2% of both Yahoo and ESPN leagues to date.

Anderson is coming back from an oblique injury, always concerning, and the team is limiting his innings/pitches in his return to the rotation. He faces a weak opponent at home, and has been a reliable if not great strikeout producer in the past.

Webb has only pitched past the four-inning mark once this season in four trips to the hill, and is scheduled to face the red-hot A’s at home on Sunday, which is not a harbinger for great things necessarily heading into the game against the Diamondbacks. Still, facing the Arizona offense at home is not exactly a daunting task, making Webb the best low-ownership streaming option on Friday.

Chirinos had a successful bullpen session, recovering from a triceps issue, and is on track to return to the Ray rotation, welcome now that Charlie Morton is on the shelf. He is not a dominant SP, but was lucky last season as evidenced by a unsustainable .246 BABIP, although his stinginess with walks certainly is in his favor (1.89 BB/9 over 133.1 IP in 2019). Coming off an IL stint improves the options that he is available to add to your roster presently, although pitching for a dominant offense is going to push up his ownership percentage in leagues.