Fantasy Baseball Daily Round Up: March 28 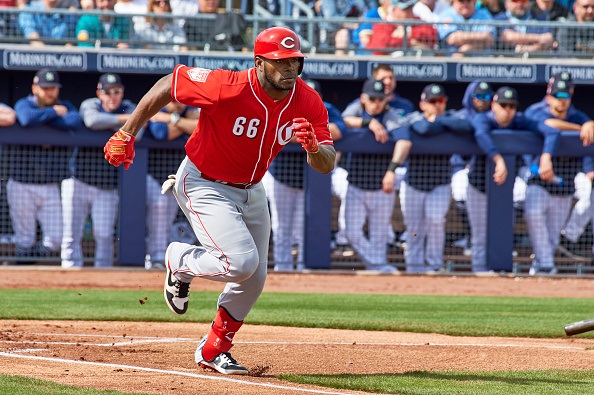 It’s here, after all the preparation, draft and auction euphoria, major league baseball will ensue in the contiguous United States. With this in mind, the Round Up will fire up on Fantasy Alarm to provide recaps of action along with what to watch for. So, why not give some hints to fantasy owners who get to overdose on a full slate of baseball in March. Here’s a capsule of things to focus on with each team over the first weekend of games.

Within a barren wasteland of fantasy interest, Jonathan Villar stands out on the roster. Baltimore optioned Chance Sisco to Triple-A despite four home runs and a .283/.533/.765 slash line this spring. Two catcher league participants should stash him now. Andrew Cashner will be the starter this afternoon, so seeing if Mychal Givens gets a chance to rebound from his horrific spring as the closer seems unlikely. Keep tabs on Miguel Castro in high leverage.

Alex Cora’s keeping his closer usage tight to the vest. Will it be Matt Barnes or Ryan Brasier or someone else? Barnes did notch a 10:2 K:BB this spring in 5.1 innings while Brasier only worked 2.2 innings with four strikeouts against zero walks. Also, watch Jackie Bradley Jr. ’s early indicators to figure out if he carries over the gains in his batted ball data from his under the radar second half.

Not much to see here other than if positive regression benefits Gary Sánchez . With the injury to Aaron Hicks , both Luke Voit and Greg Bird break camp with the team. Domingo Germán turned in a strong spring and if he gets off to a hot start, could finagle his way into the rotation going forward.

Off-season acquisition Yandy Díaz will do his best to “Wally Pipp” teammate Matt Duffy , who to no surprise is injured again. Diaz walked more than he struck out this spring (10:8 K:BB) with a .286/.407/.449 slash line and two home runs. He needs to generate more fly balls and if he does, a breakout could happen. Avisaíl García launched three home runs this spring with 15 RBI, a .312 average and .912 on-base plus slugging percentage.

Welcome to the show Eloy Jiménez . His draft stock skyrocketed with news of contract and making the roster. Setting the number at 25 home runs, most take the over. As for the closer, the White Sox allowed 10 different relievers to record a save last year. It appears to be Alex Colomé ’s job to lose.

As a fan of the movie series, seeing such names as Brad Miller , Max Moroff , Eric Stamets and Jordan Luplow on the roster along with Hanley Ramírez brings this movie clip to mind:

Will this team score enough runs to keep their front line pitching staff in line for wins?

It appears Miguel Cabrera ’s healthy this year. Will he pull the ball for power? Christin Stewart could be a source of cheap power and Jeimer Candelario could be a post-hype rebound target. Spencer Turnbull pitched his way into the rotation with a 15:2 K:BB over 15 innings this spring.

Perhaps the most under the radar roster for fantasy purposes this year. The Royals will run with reckless abandon on the bases, Alex Gordon gets overlooked every year, Jorge Soler and Ryan O’Hearn could be upside power hitters on the waiver wire as well. Early signs suggest a fluid bullpen so seeing if Brad Boxberger or Wily Peralta get the early save chances will be intriguing. No idea why, but keep an eye on dark horse Ian Kennedy shifting to the bullpen. Think a Wade Davis -lite type of transition.

Want an upset? There’s a pathway for the Twins to win this division. José Berríos needs to stabilize his home (3.03 ERA) and road (4.85 ERA) splits from last year, but he’s on the precipice of a breakout. A recent article indicated four different Twins relievers could accrue saves, but could Ryne Harper ’s 10 game sample with 14 strikeouts, zero walks and a 0.64 WHIP in 11 innings troll all of us?

With a loaded roster, it’s easy to ignore Tyler White . However, if he carries over the gains displayed last year, he could be a sneaky corner infield upside play. Which of Brad Peacock , Collin McHugh and Wade Miley cedes his rotation spot to either Josh James or Forrest Whitley ?

Life comes at you fast. Justin Upton went from cheap veteran target in drafts to the injured list with turf toe and falling fast in value. This allows both Justin Bour and Albert Pujols to rack up at-bats early on. A hot start by Bour could parlay into a sneaky 27 home run season. Need some cheap speed, Brian Goodwin joined the squad and will get Upton’s at-bats.

They added Kendrys Morales to fill-in at first base for Matt Olson and strengthen the bench going forward. This affects Chad Pinder putting him back into a utility role. Frankie Montas added a split-finger to his arsenal, so he may be the best A’s starting pitcher no one seems to even look at in drafts.

Hunter Strickland notched two saves in Japan and his average draft position increased by 100 spots. Still fading him and looking at Matt Festa or another Mariners reliever to eventually replace him. Bounce back candidates Ryon Healy and Tim Beckham flexed power in Japan, will they bring it back through customs?

Remember this year as the Rougned Odor onslaught. Ronald Guzmán tweaked his swing for more power, but there’s still tons of swing and miss in his game. Could Delino DeShields Jr. be the cheapest 30 stolen base player this preseason? Time and health will tell,  as will multiple shares.

Trying to repeat as division champs will depend on the “Baby Braves”. Kyle Wright (20:4 K:BB), Max Fried (18:6 K:BB) and Bryse Wilson (13:2 K:BB) break camp with strong strikeouts to walk rates from spring training. Can they do it in the show? Also, how long can Arodys Vizcaíno stay healthy? Will A.J. Minter share the saves upon his return? Does Craig Kimbrel ever sign?

Another team with a fresh new rotation. Marlins shiny new toys, with spring statistics, include:

So, Pete Alonso slugged his way onto the roster and will start Opening Day. There’s a chance he hits 30 home runs with a .260 average. Jeff McNeil will also start at third base and with a fast start, could relegate Jed Lowrie and Todd Frazier to the bench. Or, the Mets will rely on veterans and upset fantasy players everywhere.

Suddenly, the chance for a prolific offense in Philadelphia. Bryce Harper , and his 1.681 on-base plus slugging percentage on Opening Day, will get long time pinata Julio Teheran on the mound. This bullpen will be fluid and to many owner’s chagrin, it would be perfect if Héctor Neris gets the first save. Also, will Jake Arrieta rebound?

Why would they hit Victor Robles eighth? Adam Eaton ’s health and Robles potential should correct this by May. Ryan Zimmerman seems primed for a rebound, but will he platoon with Matt Adams ?

This team needs bounce back performances by Kris Bryant , Willson Contreras and Kyle Schwarber . It will also be funny if their best starter this year ends up being the fifth starter, José Quintana .

Your friend, Yasiel Puig , will hit third on Opening Day. As if his stock could get any higher. Nick Senzel ’s injury will delay his debut, so it’s up to Scott Schebler to hit well enough to keep the rookie in the minors. Also curious to see how the team deploys Raisel Iglesias through the first weekend of action.

Joining the upside rotation tide, Milwaukee will roll out Freddy Peralta , Brandon Woodruff and Corbin Burnes . However, a weak bridge to last man standing Josh Hader could cost them some wins. If Jeremy Jeffress gets back in two weeks, it helps stabilize the bullpen, but the Brewers need someone to emerge.

No one seems to want Adam Frazier or Francisco Cervelli for fantasy, except perhaps myself. Frazier will lead-off and Cervelli surged last year. Jung-Ho Kang seems to be gaining fantasy traction, but will his power buoy his weak approach at the plate this spring? Felipe Vázquez finishes the year as a top-3, if not the best closer in fantasy.

Many will be watching to see if Dexter Fowler ’s washed or can rebound. Dakota Hudson wins a spot in the rotation, just pay for win potential, ground balls and a strikeouts per nine around eight, not his spring results. Jordan Hicks ascends to the top of the bullpen and saves 30 games. And, Paul DeJong could hit 30 home runs if he bats third as projected.

No one deserves the luck Steven Souza Jr. gets in regards to injury. This paves the way for Ketel Marte to play center, Wilmer Flores at second base and Adam Jones gets full-time at-bats. Archie Bradley will not close to start the year, this could be a bullpen to avoid until the second half.

Colorado heads to Miami with a platoon at second base? Ryan McMahon and Garrett Hampson made the team, but how many at-bats will each get? Also, can Ian Desmond play center field well enough to remain in the lineup?

In a copycat league, the Dodgers started the fluid rotation trend being deployed by many this year. Rich Hill and Clayton Kershaw open the year on the injured list, but could be back soon. Need positional eligibility and power upside? Then Kiké Hernández should be your guy. Praying for a 150 game season by A.J. Pollock .

Suddenly one of the most interesting teams in baseball with Fernando Tatis Jr. starting at shortstop and Chris Paddack on the mound Sunday. Do not forget about Matt Strahm , the crowded outfield and the Kirby Yates breakout.

This season begins the what’s left in the tank tour for Madison Bumgarner and Buster Posey . Reports suggest a closer by committee, so Will Smith and Mark Melancon ? Strange days indeed. This could be a selling team by June.

It’s a great day. A clean sheet of records and upside abound. Be sure to stick with us at Fantasy Alarm this year to stay ahead of the competition.