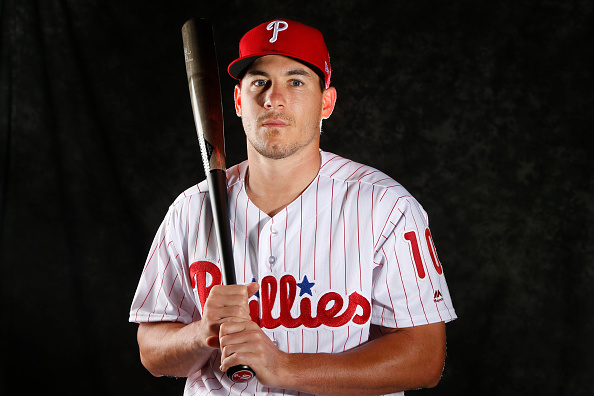 With March upon us, it’s time to hone in on player valuation and average draft positions. Of course, using ADP should be a guide, not the template. Games will begin on March 20th in Japan, then all the teams will commence in the contiguous United States on March 28th. So, if one’s yet to start preparing, Fantasy Alarm’s here for you. Consider this column a cliff notes version to note how drafts could start in the next couple of weeks. The charts date back to November and adjust every two weeks. As always, some news and notes will accompany each position. 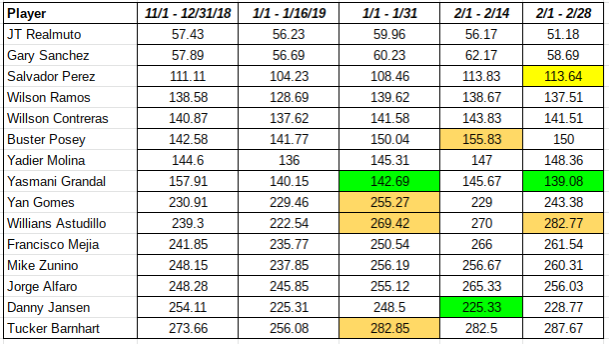 As if catcher could afford attrition due to injury, Salvador Pérez will reportedly miss the season due to damage to his ulnar collateral ligament in his throwing elbow. This will harpoon his numbers above and he should be dropped from your draft board going forward. One beneficiary of this will be Welington Castillo . Beef’s price continues to rise in drafts and his power upside propels him above Tucker Barnhart with an average draft position of 256.03 in February. Another riser resides in Los Angeles. Remember when the Austin Barnes hype train stalled with Yasmani Grandal ’s rebound last year, Barnes should be the primary catcher for the Dodgers and went as early as pick number 286 last month. Plus, he could steal five to seven bases as well. 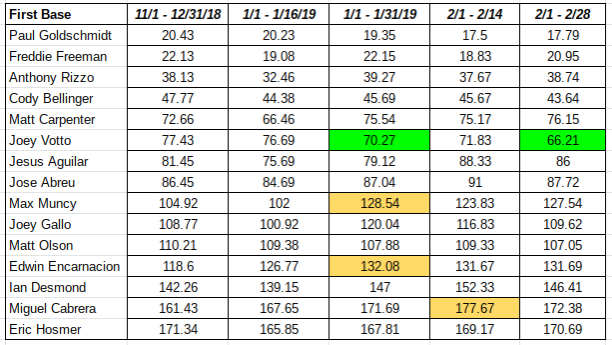 While speed dominates most fantasy conversations, first base proves to be slippery with targets in flux along with its depth being questioned. There’s some diamonds in the rough, but, be sure not to wait too long before addressing the position. Matt Olson continues to climb and sits ninth in the ADP for February. What to do with Miguel Cabrera will be perplexing for fantasy owners. He’s such a stable skill set but will he age well? So far in spring he’s hitting .545 with an on-base plus slugging of 1.552 through 14 plate appearances. But, can he pull the ball with authority? Time will tell. Other questions include, where will Edwin Encarnación start the year? Can owners wait to take Justin Smoak ? Will Eric Hosmer bounce back? 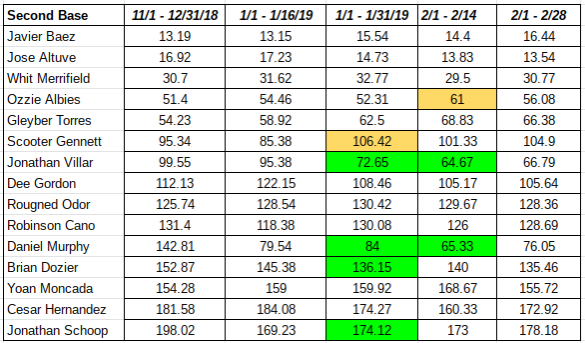 Second base provides a cornucopia of options. José Altuve , Javier Báez and Whit Merrifield sit atop the field with the ability to provide across the board. Many will speculate on the young prodigies like Ozzie Albies and Gleyber Torres . It’s interesting to see Scooter Gennett adrift in ADP plunging to the ninth second baseman taken last month. Beneath this group, both Nick Senzel and Ketel Marte continue to rise drafts although each could start the year in center field. As much as one can love Daniel Murphy hitting in Coors, owners seem to overlook Robinson Canó potentially hitting third for the Mets. Last, but not least, Jonathan Villar continues to ride his stolen base upside in drafts, so take note. 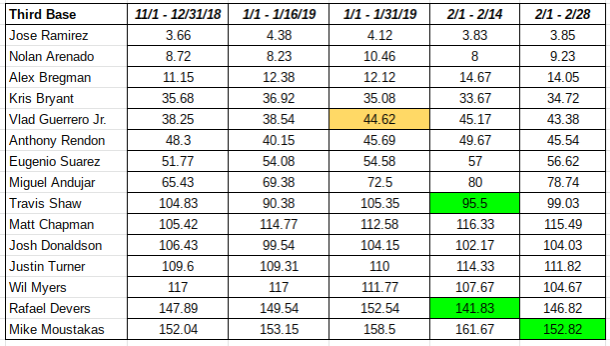 It’s curious, because many opine about the lack of depth at first base but in deeper formats, one could end up with Zack Cozart if not paying attention to the position. It’s very important to draw a line in the sand at third base during drafts, it can get away fast, especially in 15-team drafts. Also note, Travis Shaw can be used at second base and teammate Mike Moustakas could add it in season making them intriguing targets. While the Blue Jays continue to insist Vlad Guerrero Jr. needs more time in the minors, fantasy owners still crave him. It will be very interesting to see how many major league at-bats Guerrero Jr. accrues. 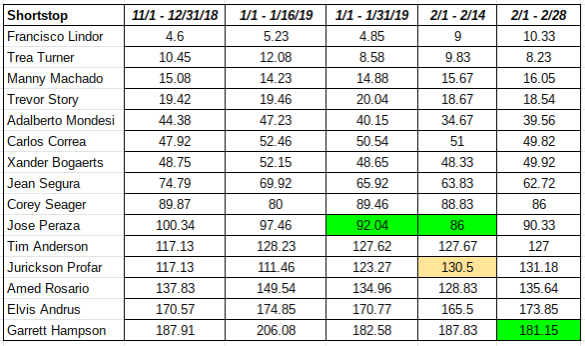 Representing another diverse group in drafts, shortstop will be a bit deeper than recent memory suggests. Francisco Lindor will make or break some drafts dependent on how fast he returns from his calf injury along with if it lingers during the year. There’s no more polarizing player in drafts than Adalberto Mondesí . If one waits, there’s power lurking in Paul DeJong of the Cardinals below this list or speed in Amed Rosario . Part of the consternation with Rosario will be where he hits in the lineup. He stole 16 of his 24 bases hitting leadoff last year, but projects to bat seventh or eighth this year. Helium alert arises with Garrett Hampson . His hot start in spring affects his ADP and if he does win the second base job, provides stolen base upside. He’s also playing some outfield, so Ian Desmond owners should be worried if he starts slowly or struggles to play center in Colorado. (Yes, it’s time to worry). 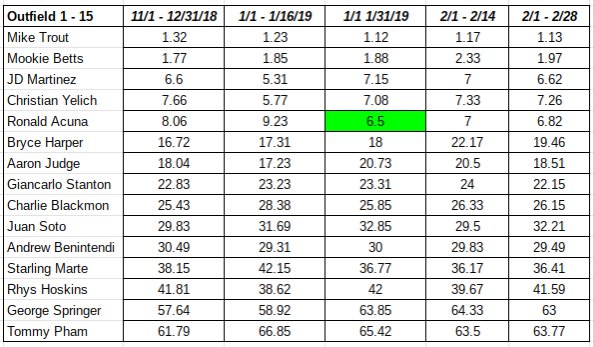 There’s really not much fluctuation in this first tier of outfielders. Bryce Harper could see a surge in ADP due to his landing in Philadelphia. Keep tabs on the sore shoulder of Tommy Pham , he will appear as the designated hitter in the next four-to-five games, but, his checkered injury past should sound a warning alert in comparison to his draft day price. It will depend on how one feels about risk. 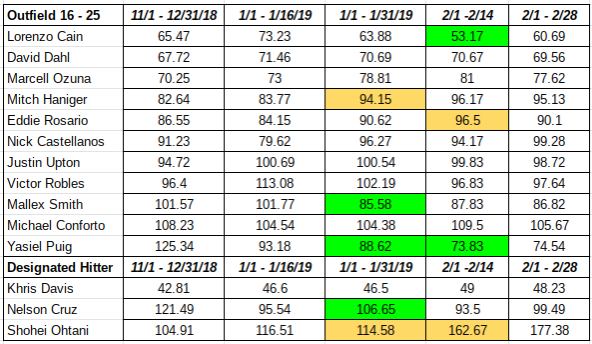 Not reflected in this chart, Lorenzo Cain actually vaulted ahead of both Pham and George Springer in February drafts. Perhaps it’s the steals or just personal preference, but be aware. Mitch Haniger ’s off to a strong start this spring but continues to slip in drafts. There’s a point in which Shohei Ohtani becomes a value compared to his ADP, it feels like he’s there at almost 178th overall.

As if it’s not said enough, the price of pitching could surprise people who have yet to take part in a mock or best ball draft. Plan accordingly. After the big three, it’s personal preference between Justin Verlander , Corey Kluber , Gerrit Cole and Blake Snell . In every draft, someone will see the name Clayton Kershaw and take him due to name recognition, this may be the year not to be that guy.

It’s curious to see how some values change in this group, but remain almost the same. Carlos Carrasco surged in the second half, if he’s your ace, it could work out, but as a second pitcher, seems more advantageous. Veterans Stephen Strasburg and Zack Greinke usually fall below the up and coming young studs. Recent news could impact the price of Mike Foltynewicz . He could miss opening day with elbow soreness and his price will drop, but to a point it’s worth it with regression already in the offing? Good luck. 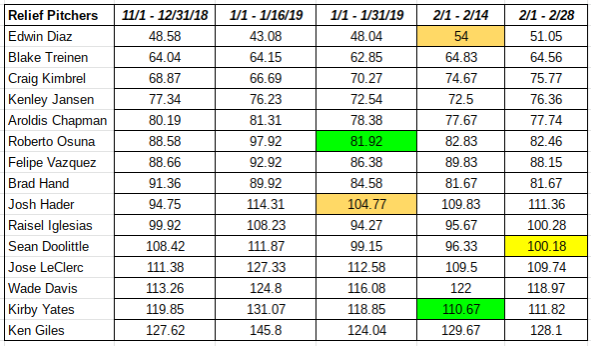 As if the innings logged by Sean Doolittle the last three years did not make him risky enough, reports suggest Washington’s in hot pursuit of Craig Kimbrel . Tread lightly here. Both Josh Hader and Raisel Iglesias seem to be stalled in terms of ADP. Keep an eye on Jose Leclerc and Kirby Yates , each will be worth taking ahead of their present price. Will the Bud Norris signing affect Ken Giles ? Time will tell, but remember to handcuff.

Draft season will be in full swing, so be sure to stay with Fantasy Alarm to stay ahead of the competition. Our draft guide and Howard Bender’s Mock Draft Army will translate to success.