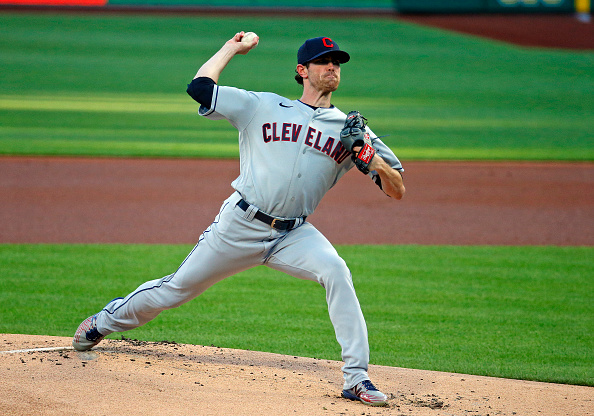 We are now nearing the halfway point of the 2020 regular season, and while things are settling down and games are being played as scheduled for the most part, it is now time to kick into high gear your fantasy squads for the championship run in your league. There are still a load of excellent arms to insert for a pair of starts this week, although there are also plenty, it is advised, that you avoid entirely. At least those circumstances are still around these days.

These fifteen SPs are those that you want to ride for both their trips to the hill this coming scoring period. Wind ‘em up and let ‘em go. Do not concern yourself with opponent or venue when plugging them into the rotation.

Brad Keller , the Brewer third year righthander, leads off the middle tier. He has yet to yield a run, earned or otherwise, over his three starts this season, comprising 17.2 IP. He is not much for strikeout production, though, and his advanced metrics (.190 BABIP, 100% strand rate) indicate he has been lucky to this point, so do not expect the unscored upon run to continue indefinitely, but he does not struggle away from Miller Park so two road games is not a harbinger of terrible things…yet.

Pablo López has been slinging it in with great success to date, as evidenced by his 2.42 ERA and 1.16 WHIP through four starts (22.1 IP). He also helps with the counting stats, sporting a tasty 24:5 K/BB ratio in 2020. He gets the cellar-dwelling Nationals to open the week on the road, but then faces the Rays in his pitcher-favoring home park.

Framber Valdez has strung together four consecutive quality starts (QS) and has been missing a fair number of bats as witnessed by his 29 Ks to date. He has two home starts on tap this week, and will need to continue to keep the ball in the park with both the Angels and A’s coming to visit, but he has only been tagged for a single round tripper so far this year.

Johnny Cueto picked up his second win of the season, coming an out shy of throwing his second consecutive QS in beating the visiting Angels. He has been ramping up his strikeout totals, and now gets a start at home to open Week 6 against the traditional rival Dodger squad, before heading to the desert to take on the Diamondbacks in his second scheduled journey to the bump in this scoring period.

Jack Flaherty , the first of two Cardinal arms to join the middle tier this week, has been limited in his usage so far by St. Louis. His last outing was restricted to just 41 pitches, and while he is being stretched out by the team, do not look for many victories to be in his stat line. He is coming off a brilliant end to his 2019 season, though, and should be counted on for better than a strikeout per inning, despite those innings being limited for the time being.

Merrill Kelly , as the Cardinals profiled in this tier, has two home contests this week. Despite getting roughed up on the road in Oakland in his last time toeing the rubber, breaking his four game QS streak, he is striking out batters at a nice 8.3 K/9 pace and still carries a useful 2.59 ERA and 0.99 WHIP heading into Week 6. And those two home games.

Chase Anderson , as with Flaherty, is being slowly worked deeper into games, although his pace is further along than the Cardinal youngster. The 32-year old righty is not a huge strikeout producer but has shown good control and features an attractive sub-three ERA (2.79 through 9.2 IP) although the 1.34 WHIP is of concern. He does have a couple of good matchups in store this week with Boston and Baltimore on the schedule.

Cristian Javier has a couple of home contests in store for him this week and has been exceptional at Minute Maid Park during his short rookie campaign. Of the two matchups, Oakland would be the scariest and they are not world beaters on the road so far, so there is that in the plus column. His low 90s fastball is generating better than a strikeout per inning (9.2 K/9 through 25.1 IP), although some better control would serve him well.

Adam Wainwright comprises the second half of the Cardinal SPs to grace the middle tier in Week 6. Unlike his teammate Flaherty, profiled four paragraphs above, he is being allowed to pitch late into contests, and while his strikeout rate is below mediocre, the ratios are attractive: 2.00 ERA and 0.83 WHIP through 18.0 IP. As with Flaherty, he has a pair of home starts, where he has been more effective the past couple of seasons.

Steven Brault has thrown limited innings this year, so temper your enthusiasm if you are using him in this dual start week. He did two hit the Indians over five innings in his most recent start, and managed to push his ERA to a palatable 3.00 with that effort. His two opponents are not pushovers, though, so a second reason to temper your excitement over snagging him off the wire, where he is readily available.

Casey Mize closes out the middle tier, and is coming off a good but not great opening rookie effort this past week. He had a mixed effort against the visiting White Sox, picking up seven Ks over his 4.1 IP, but also yielding seven hits, including a homer to Edwin Encarnación (but no walks!). The Tigers will presumably keep him in the rotation to get some MLB experience, thus the upcoming two start Week 6 schedule.

None of these starting pitchers is dependable enough to warrant using once in your rotation, let alone twice in Week 6. All are capable of skewing your ratio stats with a bad outing or perhaps two. Even Sean Manaea who has been pitching well is heading out for a pair of road games and Oakland has not been playing as well on the road this season, so that makes his usage less than optimal. Spencer Turnbull , who had been pitching like the Detroit ace, has stumbled badly over his last two outings, having trouble finding the strike zone consistently. Just stay the heck away from these arms.

Despite pitching pretty darn good, the Miami righthander does not have a decision on the season. His ratios look inviting though: 1.84 ERA and 0.75 WHIP. The Mets are two games under .500 at Citi Field this season, so the matchup is good here. Plus, the possibility of strikeout production by the 25-year old is excellent.

Duffy’s strikeout rate has been elevated to open the season, and is likely due to regress from the stellar 10.4 K/9 he currently possesses. Most of his starts (four of five) have been on the road, so that is not a negative aspect to using him here, although his team has not fared well away from their home environs. He is the second-best streaming option on this day, let’s leave it at that.

As with Duffy above, Walker’s team has not fared exactly well on the road this season, posting a dismal 4-11 record away from T-Mobile Park. Walker is coming off a season-high tying eight strikeout effort, although the three dingers he gave up are a concern, as the Padres are ranked three on the season in HR production. Third best streaming option on the day.

Fourth best option of the day, Williams has a decent ERA at 3.70, and none of his underlying metrics scream out to avoid him at all costs. His backing offense, now that is another matter. Expect some strikeouts, but do not set your hopes on a victory for this SP.

The Houston rookie picked up his first win as a starter in his last outing against the visiting Rockies, his other two victories this season coming as a relief arm. His ratios are mouthwatering: 1.69 ERA and 1.13 WHIP through 21.1 IP. Get those while you can, as his strikeout rate is below average at 6.3 K/9 and his control definitely needs some attention (4.6 BB/9).

Isn’t if fun to be able to choose or use both sides of a matchup? Kim has a small sample size to analyze but looks to keep starting for the Cards with their need to make up games in the form of double headers, and the southpaw does get to face the pathetic Pirate offense here. Kuhl, for his part, is coming off a loss to the host Reds where he yielded a pair of smash-bombs, but his mid-90s fastball is allowing him to pick up strikeouts this season at an improved pace over his career numbers (so probably due to regress, at some point). If you are looking for a win, would suggest going with the KBO import Kim.

It is with reticence that Porcello is even offered as an option here, and now word comes out that the Mets weekend series has been postponed due to COVID test results. No guarantee this start remains on the docket, but if it does, the former Cy Young winner is available in lots of leagues.

The second-year southpaw tossed a QS in Houston, but ended up being saddled with the loss. He is demonstrating excellent control, allowing just two free passes in his 14.1 IP, and has allowed less than a baserunner per inning this season, with just two walks and 11 hits charged against him, as evidenced by his stellar 0.91 WHIP. Not only that, but the opposing pitcher, “Bundy the Magnificent” came back to earth in his last outing.

Erlin’s promotion to the rotation looks like it will stick for the time being. His strikeout rate has exploded this season, sitting at an impressive 12.6 K/9 over his 10.0 IP covering one start and three other relief appearances. His control has simultaneously been superb, having issued just one walk in his four trips to the hill. If you cannot find him on your waiver wire, I would also be extraordinarily surprised.

Cahill’s second stint on the bump lasted longer than his first, and although his inning total still would not qualify him for a QS (5.2 IP to date). He struck out four Angels, but also allowed a homer to account for the lone earned run scored on him in Anaheim. He now heads to the desert to take on one of the residents of the middle tier discussed above in the two-start pitcher portion of this article. He wraps up some slim pickings this end of the scoring period.