Joe Gallina breaks down the top injuries and COVID situations to keep an eye on as we head into a four-game slate this weekend for the Divisional Round! 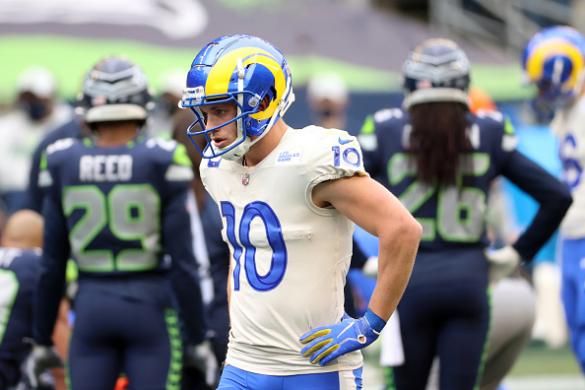 Welcome to the Divisional Round Playoff edition of the Fantasy Alarm NFL Injury Report. The information contained in this article is accurate as per Thursday’s practices. While players who have questionable tags are often able to play, please continue to monitor their progress as game times approach. Fantasy Alarm will continue to post updated individual player news as it happens.

Goff has been a full participant in practice this week and head coach Sean McVay has officially announced that he is the Rams’ starting QB against the Packers. John Wolford was unable to practice this week so Blake Bortles will be Goff’s back up.

Hill did not participate in Wednesday or Thursday’s practices. If he’s active Sunday, he might have some mobility issues. That eliminates one of his best weapons, since when he’s asked to play a snap or two in Drew Brees ’ place, he’s often asked to run the ball. The fact that he hasn’t practiced at all this week is not a good sign, but you should continue to monitor his progress.

Edwards-Helaire was limited during Wednesday’s practice and did not practice on Thursday. He’s been dealing with his injuries since Week 15 and the fact that they’re still limiting him is concerning. Watch his progress carefully. If he’s out this week Le’Veon Bell and Darrel Williams would likely split carries, but don’t forget about Darwin Thompson. He had a big game in Week 17, scoring a rushing and receiving TD.

Jones’ swollen injured quad caused him to be inactive for last week’s game against the Washington Football Team. He missed practice Wednesday but was a limited participant on Thursday. The fact that Jones was able to practice is a good sign, but keep in mind that Jones logged a full week of practices ahead of his matchup against Washington and aggravated his quad in pre-game warmups.

Murray missed Wednesday and Thursday’s practice. Earlier this week NFL Network’s Ian Rapoport called his status “up in the air.” If Murray is sidelined look for Alvin Kamara to have a slight uptick in usage and Ty Montgomery and Dwayne Washington to potentially have a slightly expanded role against the Bucs.

Smith, who hasn’t played since Week 16, is eligible to return off of the injured reserve and has been able to practice this week. If he’s active he would likely cut into Deonte Harris’ playing time.

Kupp is suffering from a knee contusion. He didn’t practice Tuesday or Wednesday, and the Rams listed him as questionable on Thursday.  He is expected to play but in the unlikely scenario that he doesn’t, look for Van Jefferson to be more involved in the Rams’ offense this weekend.

Godwin, was a limited participant in practice on Thursday but seems to be on track to play. He caught five passes against the Washington Football Team last week, but also dropped four as well.

Evans was another Bucs receiver who was limited in practice this week. He was a game time decision last week but through the combined efforts of Bucs trainers, his own portable cold compression machine, and therapy received from Tom Brady ’s TB12 Performance and Recovery Center, he played in his first playoff game. He caught six passes for 119 yards, and should be active once again this week against the Saints.

Watkins did not practice on Wednesday or Thursday. Watkins originally injured his calf in Week 16. If he is inactive, look for WR’s Demarcus Robinson and Mecole Hardman to absorb some of Watkins’ targets.

Cook logged limited practices on Wednesday and Thursday. The fact that he’s practicing at all is a good sign. It’s possible he’ll get a designation on the Saints’ injury report but he’s expected to play against the Bucs this week.

Njoku missed back-to-back practices on Wednesday and Thursday. Austin Hooper is obviously the fantasy relevant tight end in the Browns offense, but if Njoku is inactive this weekend Harrison Bryant would see an uptick in snaps played.

Donald (torn rib cartilage) is still on track to play. As per Sean McVay earlier this week, “unless something unforeseen happens, the Terminator will be ready.”