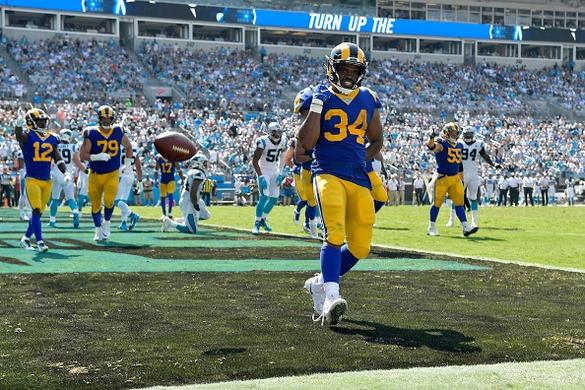 We finally got to see some of those new look backfields in action in Week 1. It was especially interesting to watch the Bills and Bears rookies Devin Singletary and David Montgomery work their magic. Some of these backfields are still a work in progress and we’ve got some injuries to deal with, but be sure not to panic or overreact. We’ll wipe the slate clean and start all over again in Week 2.

Fantasy players owning shares of David Johnson had to be very pleased with his performance as fantasy footballs RB6 in PPR scoring last week. As expected, Kliff Kingsbury’s new “Air Raid” offense caused the Cards to throw the ball 71.95% of the time in Week 1, the eighth most in football. Johnson still ended up with 18 carries and 82 rushing yards and he caught six balls for 66 yards including a TD reception. We fantasy players love the fact that his backup, Chase Edmonds , only carried the ball one time, and that DJ was able to average 4.6 yards per carry (YPC) running behind a marginal offensive line.

The Falcons offense was non-existent in Week 1 but Devonta Freeman owners should note that he and his back up Ito Smith each played 36 snaps. Smith was the more effective runner with a 5.2 YPC. We mentioned last week that in the past the Falcons’ run game was most effective when they used to use that Freeman/Tevin Coleman one-two punch. Week 1 saw Freeman carry the ball eight times compared to Smith’s six carry effort against a stingy Vikings run defense. It doesn’t get much better for the Falcons as they face the Eagles in Week 2. The Eagles gave up just 28 yards on the ground to Redskins RBs Derrius Guice and Chris Thompson last week. We’ll watch the distribution of carries in Week 2 in order to determine if Freeman shareholders really have something to worry about.

It was fun watching Devin Singletary eat up chunks of yards in Week 1. He carried the ball four times, running for 20, 23, 12 and 15 yards. Frank Gore remains the early down back…for now.  T.J. Yeldon played just two snaps and with Singletary catching five passes, look for him to seize the passing down role for the Bills. Singletary will be the Bills’ lead back sooner rather than later.

It looks as if the Bears backfield will be a work in progress for the first few weeks of the season.  Tarik Cohen had zero carries and played most of his snaps as a wide receiver, with the majority of them coming from the slot. He caught eight balls for 49 yards. We tend to forget that Mike Davis is a pretty good receiver in his own right. He played twice as many snaps as the rookie David Montgomery , carried the ball five times for 19 yards and had six catches for 17 yards. Montgomery rushed the ball 6 times for 18 yards and made a nice catch on his lone target. He showed some of his flashy ability to break tackles that he’s known for. We’ll monitor his progress as the Bears will likely find a way to increase his role in their offense.

Watch Joe Mixon ’s progress as he’s nursing a sprained ankle. Giovani Bernard would step in as the Bengals’ starting RB in case Mixon is sidelined in Week 2. Samaje Perine , who has good receiving skills, would back up Bernard.

Ezekiel Elliott and Tony Pollard each carried the ball 13 times even though Zeke played 37 snaps to Pollards 22. Look for Elliott to get a much larger share of carries in Week 2.

Philip Lindsay and Royce Freeman virtually split snaps played and carries about evenly in Week 1. Lindsay did catch four of his six targets making him the back to own in PPR leagues, but this is looking like a true 50/50 committee backfield.

Kerryon Johnson played twice as many snaps (48) than C.J. Anderson (24) but Anderson had more carries (11) in a change of pace role, than we expected he’d receive. Johnson carried the ball 16 times and will continue to be the Lions’ primary early down back, but it appears as if Anderson will have a steady role in this offense. 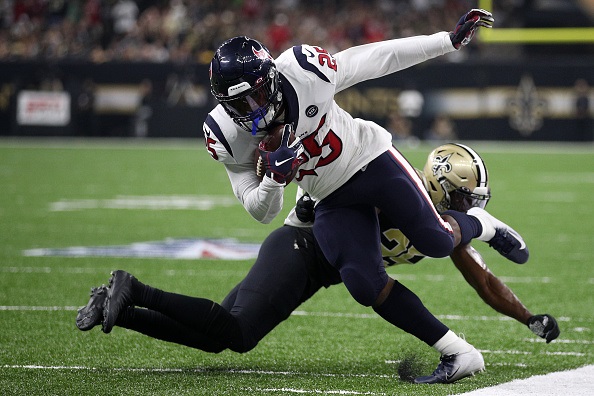 Duke Johnson and Carlos Hyde both looked explosive against a Saints defense that was tough against the run last season. Johnson played almost twice as many snaps than Hyde but other than Johnson getting more work in the passing game, carries were pretty evenly distributed.

Damien Williams played more than twice as many snaps as LeSean McCoy (45 to 20). However, although Williams got more work in the passing game, distribution of carries was very similar. McCoy was the more productive back with 8.1 YPC and with his past relationship with Coach Andy Reid, this is a situation worth monitoring.

Melvin Gordon who? In last week’s column we mentioned that we thought Ekeler would be the busier back in the Chargers backfield due to his ability to both run with and catch the ball, and he out-snapped Justin Jackson 47 to 16.  Continue to think of Jackson as the change of pace, goal line back and for now, Ekeler’s handcuff. Some reports have Gordon holding out until Week 8. He may never carry the ball for the Chargers again.

Todd Gurley got off to a slow start in Week 1 but ended up with 97 rushing yards and 6.8YPC. Malcom Brown vultured two goal line TDs despite playing just 21 snaps to Gurley’s 53. For those who assumed that rookie Darrell Henderson would be Gurley’s handcuff…he played just two snaps. Carries were near even with Gurley getting 14 and Brown getting 11. It wasn’t a great start for Gurley owners, but we’re just one week into the season.

The Dolphins got pummeled 59-10. We’ll check back with this backfield when they’re involved in a game where the score is close enough where they might even think about running the ball…probably sometime in the 2020 season.

Eagles’ rookie Miles Sanders led the team’s RBs in snaps. However Sanders, Darren Sproles and Jordan Howard all had very similar stats when it came to carries and catches in Week 1. We’ll have to wait and see how the Eagles backfield develops. Traditionally their backfield has been an RBBC fantasy nightmare.

With Tevin Coleman suffering a high ankle sprain and expected to miss multiple weeks Matt Breida will likely be the 49ers lead back with Raheem Mostert serving as his handcuff and the the change of pace back. Jeff Wilson could have a role in passing downs.

Ronald Jones was the most effective RB in the Buccaneers backfield rushing 13 times for 75 yards. Peyton Barber had eight carries and played a similar number of snaps in comparison to Jones. We’ll watch their usage in the coming weeks. Dare Ogunbowale led the trio with 26 snaps played and with five targets and is firmly entrenched as the team’s passing down back.

With Derrius Guice out for a few weeks due to a meniscus injury Adrian Peterson , who was a healthy scratch inWeek 1, has been named the starter for Week 2. It seems every time people start to count Peterson out it only spurs him on to perform better. The veteran rushed for 1042 yards last season. Look for him to run with reckless abandon in Week 2 after being benched last week. Chris Thompson was very effective in his familiar role as the pass catching third down option in the Redskins’ backfield in Week 1.