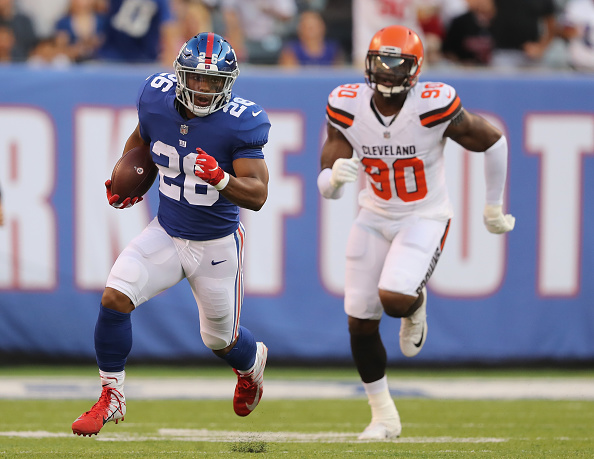 Are you ready for some football?  It is that time of year where we start transitioning into football which is music to my ears being a Mets fan. The first preseason games are in the books and of course with that comes a barrage of nicks and bruises. We have also already endured our first tragic season-ending injury but it assuredly will not be the last. It is fantasy football draft season right now, but because injuries are so prevalent it is always better to draft as close to Opening Day as possible. So without any further ado, let’s delve into the first edition of the 2018 fantasy football emergency room.

Brown was finally cleared to practice a few days ago after being held out of Pittsburgh’s first preseason game. He had been dealing with a quadriceps injury he suffered at the beginning of training camp so this is great news in terms of his progress. Pittsburgh will likely hold Brown out of most game action in the preseason which will help ensure he is fully healthy and ready for Week 1. Brown is unquestionably the best wide receiver in the league and worthy of a top three draft pick, especially in PPR leagues. He is averaging well over 100 receptions and ten touchdowns over the past five years and there is no reason to expect less heading into 2018.

Fantasy GMs held their collective breaths on Monday when rookie sensation Saquon Barkley limped off the practice field and had his leg wrapped after an impressive catch and run. It turns out that he only suffered a mild strain which is great news because it could have been a lot worse. Barkley is a once-in-a-generation type of rookie and is being drafted accordingly despite never having played a down in the NFL. The Giants will likely be very cautious and conservative with the second overall pick in the 2018 draft in terms of practice reps and preseason game snaps. He has the ability to be dynamic and explosive running the ball and catching passes, so do not hesitate to take him in the middle of the first round in drafts. 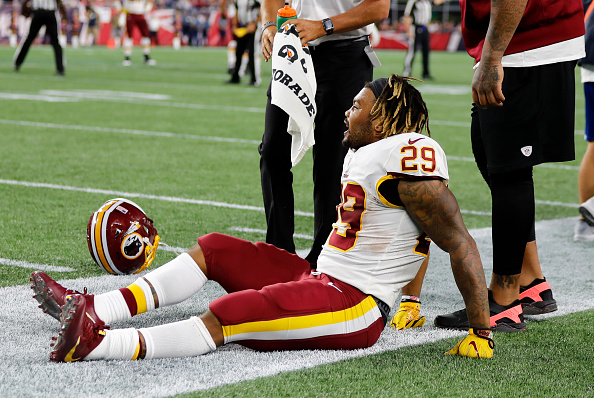 Fantasy GMs who have drafted already received some devastating news that Redskins rookie running back Derrius Guice suffered a torn ACL and will miss the entire season. He left the first preseason game with a knee injury that turned out to be much worse than initially expected. Washington has placed Guice on Injured Reserve and will head into the season with a backfield of Chris Thompson , Samaje Perine and Rob Kelley. Thompson has value in PPR leagues but Perine and Kelley were awful in 2017 and should not be on your radar for this year either.

The 49ers signed McKinnon to a lucrative four-year contract this spring to lead their backfield behind Jimmy Garappolo. This was finally his opportunity to be a full-time featured running back which helped elevate his fantasy value and average draft position. However, he suffered a knee injury in practice on Sunday which prompted an MRI. The good news is that the MRI only revealed a strained muscle so the injury does not appear to be serious. Backup running back Matt Breida is also out with a shoulder injury for the rest of the preseason so the 49ers will likely be very cautious with McKinnon to ensure he is fully healthy before putting him back into game action.

Jeffery underwent surgery on his rotator cuff after the Eagles won the Super Bowl and was initially expected to need six months to recover. However, it is being reported that there is a possibility Jeffery could begin the season on the PUP list which means he would miss the first six games. No final decisions have been made yet, but this is something to keep in mind when drafting because Jeffery’s value will take a huge hit if he is not eligible to return until Week 7.  He was one of Carson Wentz ’s most reliable targets in 2017 as he caught nine touchdowns and was expected to fill that role once again this year.

Handcuffing in fantasy football is a smart strategy, especially depending on who the primary running back is on the team. Corey Clement is one of the best handcuffs you can draft heading into 2018 and coming off a spectacular performance in the Super Bowl. He will be backing up Jay Ajayi and should see a good amount of playing time, especially if the Eagles passing game is a little more conservative this year to help protect Carson Wentz . Clement has not practiced since the Eagles’ preseason game last Thursday as he is dealing with a vague right leg injury.  There is no indication that this is anything to be concerned about right now, but keep an eye on his progress as you get closer to your draft.

The Patriots running back committee is always impossible to predict in terms of who gets the bulk of carries and scoring opportunities. Burkhead is at or near the top of the likeliest candidates to see those short yardage scoring chances and also catch passes out of the backfield which makes him a great fantasy asset. He was limited in practice last week and did not play in the first preseason game, and he has yet to return to practice. It has not been disclosed what kind of injury he is dealing with, but the Patriots are typically bizarre in their handling of injuries. Right now there is no reason to be concerned about his status for the regular season, so keep drafting Burkhead as if he is New England’s primary scorer. 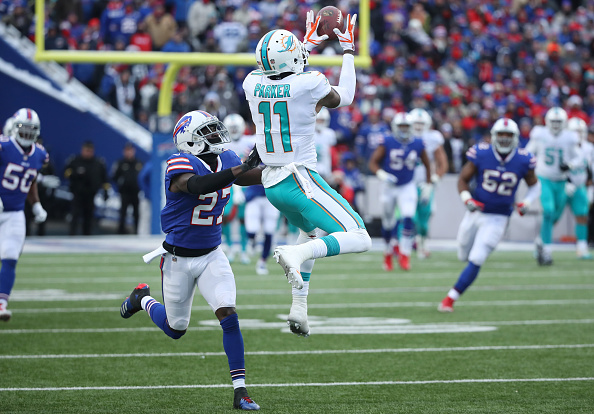 After Jarvis Landry was traded to Cleveland, Davante Parker became Miami’s new number one wide receiver. However, it has not been sunshine and rainbows for Parker thus far as reports have indicated that he is struggling mightily in camp. That could partially be because Dolphins’ quarterback Ryan Tannehill missed all of 2017 and it is taking some time for them to get on the same page. Now Parker missed practice on Monday with a hand injury, so the cause for concern just grew a little larger. There is no indication that this injury will require an extended absence, but it does set him back in his quest to emerge as Miami’s go-to target.

There are high expectations for Kittle to be one of Jimmy Garoppolo ’s favorite targets this season. He is being regarded as a real sleeper in drafts looking to build off his rookie season in which he caught 43 passes for 515 yards and two touchdowns. However, he suffered a separated shoulder during the 49ers first preseason game and will miss the rest of the preseason. San Francisco seems confident that Kittle will be ready for Week 1 so hopefully he can pick right up where he left off in terms of his chemistry with Garappolo.

Colts running back Marlon Mack sustained a strained hamstring during last week’s game against Seattle and is expected to be out for a few weeks. He is on top of Indianapolis’s depth chart and should be ready for the regular season making him a viable RB2 or Flex option in most league formats. Mack’s value will also be boosted with the return of Andrew Luck as the Colts aerial attack should help the running game tremendously.

Foreman suffered a torn Achilles tendon last November and is hoping to be ready for Week 1 of the regular season. Houtson’s head coach Bill O’Brien reported recently that Foreman’s progress was going in the right direction, but that is not overly helpful for fantasy GMs. Lamar Miller is the primary running back for the Texans but his pedestrian output opens the door for Foreman to have opportunities if he is healthy enough. For now, wait until the later rounds to take a chance on him.

The Jets brought in free agent Isaiah Crowell to shoulder a bulk of the carries out of their backfield and on the goal line. He has been durable throughout his career playing in all 16 games of each of the last four seasons with the Browns. However, Crowell suffered a head injury during a goal line collision in the first preseason game last week and had to be taken out.  He was getting tested for a concussion but there is no indication right now that he actually did suffer one. The Jets will likely take it easy with Crowell during the preseason as he is expected to be a big part of the offense, especially because we do not know what the quarterback situation will be as of yet.