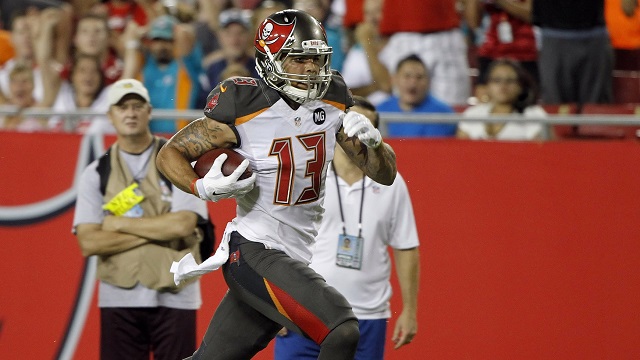 Football is officially back.  After last night’s game between the Steelers and Patriots, we are underway with the 2015 NFL season.  It was a tumultuous preseason with several injuries to key players, but now we must focus on what is in front of us and make good decisions with our lineups and rosters.  So without further adieu, here is the next edition of the gridiron walking wounded.

Pay no attention to the fact that Bryant was held out of the last few preseason games.  He was given plenty of time to rest his hamstring and will absolutely be on the field Sunday night against the Giants.  Bryant is already one of the top three wide receiver options and should be in for a huge game against a suspect Giants defense.  Stick him in your lineup and just sit back and watch the points accumulate.

Cobb may not be at full strength, but he will be on the field Sunday against the Bears.  That is good enough to solidify him as a must-start elite wide receiver that should have a field day against the Bears’ defense.  Look for Aaron Rodgers to target him at least ten times and expect big numbers from Cobb across the board.

Evans has not practiced all week as he continues to deal with a hamstring injury.  Tampa Bay has indicated that he could still play even if he does not practice at all.  Evans will be a game-time decision which leaves fantasy owners in limbo.  Chances are that he will suit up and be on the field assuming he continues to feel better over the weekend, so plan on playing him.

White has returned to full practice after having bone chips removed from his elbow.  This is good news for fantasy owners who likely drafted White at a discount due to his recent injury issues over the past couple years.  The Falcons should have an explosive passing game this year and a healthy Roddy White will be a big part of that.  He is a great WR3 option this week in what should be a shootout against the Eagles on Monday night.

The opportunity to start is there for Tre Mason as Todd Gurley will be out for a month.  But Mason continues to be limited in practice with a hamstring injury.  He is another difficult decision for fantasy owners because we likely won’t know for sure whether he is playing until shortly before game time on Sunday.  Mason could provide great value given where he was drafted, but he is only a borderline Flex option right now given the uncertainty of his status.

It is not official yet, but you can basically rule out Victor Cruz for Sunday’s primetime game against Dallas.  Cruz was coming back from major knee surgery but has also been dealing with a calf issue that has cost him most of the preseason.  The Giants want to be sure he is fully healthy before putting him back on the field, so you can expect Rueben Randle to be the number two receiver on the field Sunday night.

The Ladarius Green hype train will be derailed for at least a week as he suffered a concussion earlier in the week.  Green would have had a golden opportunity to play while Antonio Gates serves his suspension, but now he will miss at least a week and maybe more.

Second-year tight end Eric Ebron appears ready to go on Sunday against the Chargers after dealing with an ankle injury during the preseason.  Ebron had a disappointing rookie season but should be a bigger part of the Lions’ offense as opposing defenses will be focusing their attention on Calvin Johnson and Golden Tate.  Ebron isn’t quite a must-start option but he is certainly someone to keep an eye on as the season progresses.