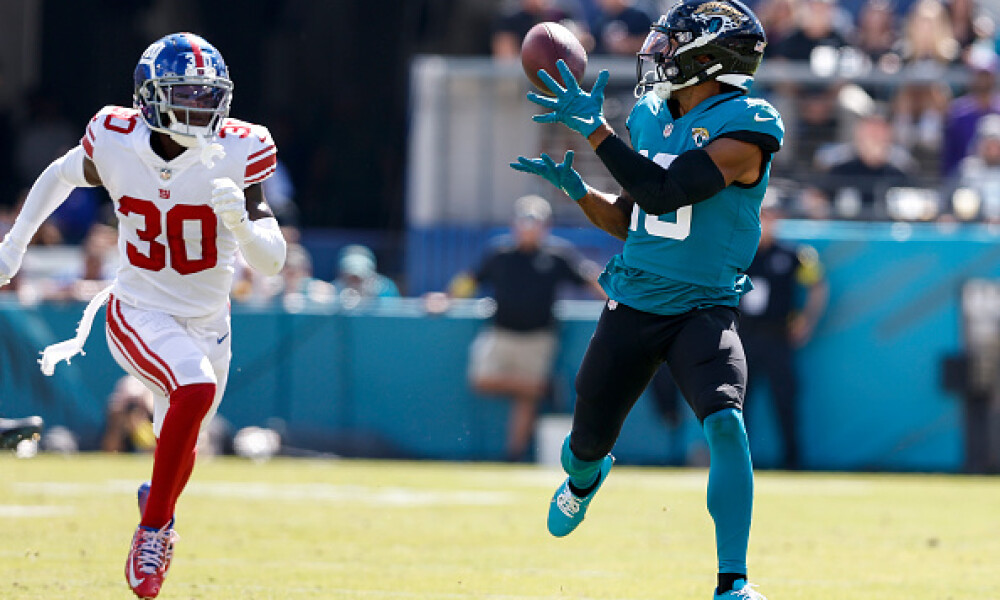 I love when one of my favorite receivers on the slate is under $7,000 on FanDuel, because it allows me to easily get other studs in my daily fantasy football lineups, whether it be another wide receiver, like Tyreek Hill of the Miami Dolphins, or at another position, a la Saquon Barkley of the New York Giants in a dream matchup. From studs, to value plays, to mid-tier players, I got it all for you in this week’s DFS WR Coach. Here are my favorite DFS options at wide receiver for your Week 10 NFL DFS lineups, including my top receivers, best value plays, and receiver to fade.

Kyler Gordon has allowed all but three targets in slot coverage to have been caught this year, per Pro Football Focus (PFF), not to mention two touchdowns and a 118.3 passer rating when targeted. St. Brown has received nine targets in two straight games, and while he hasn’t found the end zone since Week 2, he’s in a great spot in this game that could see plenty of points on the board, especially when he travels to the slot against Gordon.

Is it a stretch to say that Hill might have the highest floor of all receivers in DFS? I don’t know if it’s a stretch to be honest. Hill has at least seven targets in all but one game this season, and fewer than 70 receiving yards in just two games. In the five games where Tua Tagovailoa played every snap, here are Hill’s numbers.

With Tagovailoa under center, touchdowns be damned, Hill is as safe as they come.

Using Diggs this week could be an interesting opportunity for insane leverage in GPPs. Depending on Josh Allen’s elbow, you may prefer to fade Diggs in cash games, but if projected ownership is going to be low, then we must consider Diggs in tournaments. The Vikings have allowed the second-most fantasy points to wide receivers over the last four weeks, and they rank 30th in DVOA against the WR1. Keep an eye on our projected ownership numbers, as well as the status of Josh Allen leading up to Sunday’s kickoff.

I may be crazy for liking a second-half bounce back for Russell Wilson, but if I’m right, starting this week, Jeudy should be in line for quality production. He gets a good matchup against the Tennessee Titans, who have allowed the third-most fantasy points per game to wide receivers this season. They rank 30th in DVOA against the WR2 position, allowing the seventh-most yards per game to them. While Jeudy hasn’t busted through in recent weeks, the volume has been there, as he’s averaging 8.3 targets per game over the last four weeks.

Cooper might not have the highest ceiling with Jacoby Brisset under center, but he has a consistent workload, and if you are stacking the Miami offense, you can bring it back with Cooper. The star wideout traded for pennies this offseason is averaging 8.3 targets per game and he’s found the end zone in three of his last four games. The Dolphins rank 31st in DVOA against the pass, and they are one of just 10 teams allowing at least 75 receiving yards to the opposition’s WR1 on a per game basis. Cleveland wants to run the ball with Nick Chubb, but if Miami’s quick-strike offense shows up, and Cleveland falls behind, they’ll have to air it out, benefitting Cooper.

We like the Chiefs this week, right? Of course! If you are stacking Kansas City, and need a Jaguar to bring it back, look no further than Kirk, who has at least seven targets in three straight games, and his production has picked back up after a little lull in early October. The Chiefs rank 24th in DVOA against the pass, but more importantly, they are dead last in DVOA against the WR1, allowing just under 88 yards per game to the position. Also, don’t rule out some YAC for Kirk this week, as the Chiefs have the seventh-worst team tackling grade, per PFF

Smith-Schuster has been excellent of late, and with no Mecole Hardman in this contest, he should see a couple of extra targets. Smith-Schuster has at least eight targets in five of his last six games, and on FanDuel, he at least 11 FanDuel points in four of his last six. It's a good matchup against the Jaguars, and if you are playing Patrick Mahomes as your quarterback, Smith-Schuster is the logical wide receiver to play with Mahomes in this matchup.

Well, it only took half of the season, but he’s back! Justin Fields’ recent emergence has helped everyone on that team, notably Mooney, who is averaging 4.7 receptions on 6.8 targets for 63.3 yards per game over his last six. He has at least 50 yards or a touchdown in six straight games, and in Week 10, he gets a juicy matchup against a Detroit defense that ranks 26th in DVOA against the pass this season and sixth-worst against receivers in terms of fantasy points per game over the last four weeks. The Lions rank 23rd in DVOA against opposing WR1’s, and for what it’s worth Mooney went for 120+ yards in both games against Detroit last year (1 with Justin Fields, 1 with Andy Dalton at QB).

If you want to bring something back from the Browns because you already have Tua Tagovailoa, Tyreek Hill, and Jaylen Waddle in your lineup, look to Peoples-Jones. He’ll see a good bit of Xavien Howard, PFF’s 95th ranked corner (out of 113), and DPJ has seen his usage increase in recent weeks. Over his last five games, he’s played in at least 84 percent of the snaps in each game while seeing at least four targets. During this five game run, he’s averaging over 15 yards per reception, and double-digit points in a PPR setup per game. Don’t be surprised to see his speed on display, and a highlight play with Xavien Howard looking like some burnt toast on a long touchdown for the former Michigan receiver.

Robinson has yet to have that big breakout game, but it could be coming, perhaps as early as this week! Houston ranks 19th in DVOA against the pass, and their zone-heavy scheme and “bend but don’t break mentality” under Lovie Smith allows for a lot of work underneath. Well, Robinson can thrive in these spots, and when you see that Robinson averages five yards after the catch per reception, every Houston fan will tell you that receivers with YAC ability are bad for the Texans. Houston is one of the worst tackling teams in the league, missing tackles left and right, and Robinson is shifty enough to make a man or two miss, and take it to the house. It’s going to be the Saquon Barkley show, but four or five grabs for 50+ yards and a touchdown is easily in play for Robinson.

The Bills’ secondary is as tough as they come, but most importantly, they rank fourth in DVOA against the WR2. Thielen’s volume has been incredibly steady, as he has at least seven targets in all but one game this year, but if he doesn’t get the touchdown, he hovers right around the low-teens in fantasy output. I’m betting on him not scoring for the third straight week, en route to being a fade for me this week at the price point in this matchup.