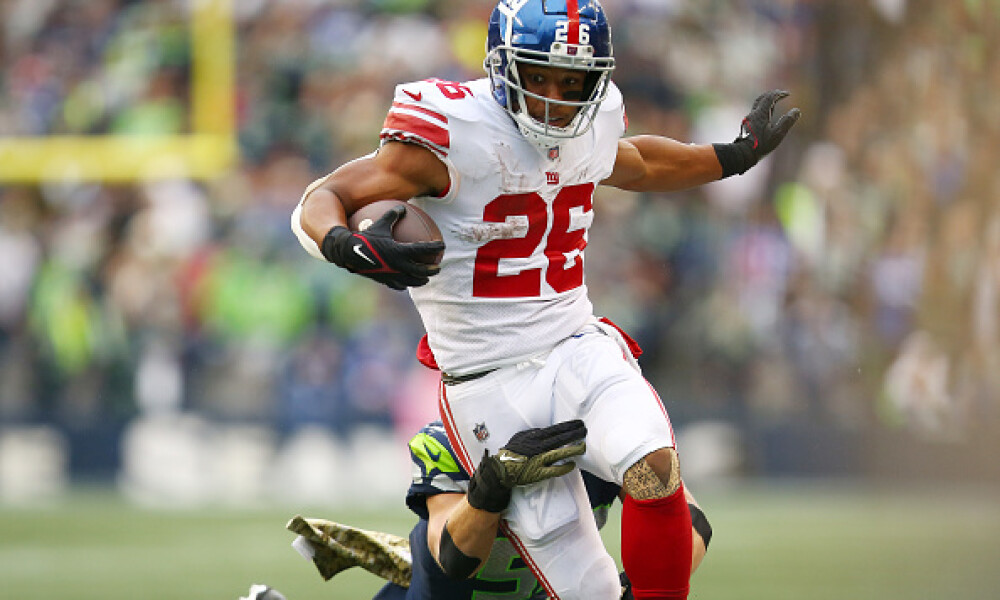 We flip the NFL DFS page over to Week 10. Travis Etienne crushed as the cover player of the RB Coach last week and I like him once again this week, but we have a few other intriguing options on tap this week as well. It’s extremely easy to like Saquon Barkley after the Giants bye week last week. Why do I like them and who else do I like this week? Let’s dive into the top plays, values, and fades for NFL DFS action on DraftKings and FanDuel for Week 10!

Barkley is the top-priced back this week and he’s also an extremely chalky play. He has been incredible this year, averaging 20.7 DK points per game (third best on the slate) and he has been so safe/consistent, scoring at least 11.8 in every single game this year. He has at least 20 carries and three receptions in three straight games and is basically the entirety of the Giants offense at this point. He gets to face the Texans this week and they rank as the number-one matchup for backs this season. Over the last three games, the Texans defense has allowed 7 rushing touchdowns to opposing backs.

Etienne has been going bananas over the past three games, with 26.9 points per game on DK in that span. He is getting a ton of volume (as you can see in the image below), racking up 30 touches in Week 9 and 27 in Week 8. He should continue to be the Jags bell cow back and his talent is easy to see. The other part that’s good too is that he does not come out on passing downs, so if the Jags do trail in this game against a tough Chiefs team, he will get that work too. The Chiefs also rank as a favorable matchup for backs as they are just outside of the top three (matchup-wise).

There isn’t much word on if Zeke will play this week yet and that is a huge factor in how interested I’ll be in Pollard this week. If Zeke is out, Pollard is a smash play in all formats and will likely be incredibly chalky after we watched him go off in Week 8 as the starter, rushing 14 times for 131 yards and three touchdowns. However, even if Zeke plays, I like Pollard this week (just becomes a bit riskier). He deserves more work and has shown that time and time again. On top of that, Zeke would be given less work as he works his way back from injury. The Packers are an above-average matchup for running backs this season, which doesn’t hurt either.

Miami wasted no time getting Wilson involved in his debut with the team last week as he rushed 9 times for 51 yards and caught all three of his targets for 21 yards and a score. He out-touched, out-gained, and out-scored (DFS-wise) Mostert last week and is only going to be more familiar with the offense this week. There is a chance that he slots in as the lead back in this offense, which is an explosive one, and he appears to have already gained the receiving work. He may not be this cheap for long, so we need to take advantage of it while we can.

Hunt is very hit-or-miss, which has left him with a cheap price tag, but I like him in this matchup this week. This should be a high-scoring game (as all of the games that include Miami seem to be) and the Browns will likely be trailing. Hunt matched his season-high in receptions and touches in the Browns last game and we could see more of the same this week. I see him cracking double-digit points in this matchup and if he finds the end zone, which is very possible, he could be one of the best values on the slate.

Why is Dillon this expensive? Honestly, I just don’t get it and I can’t fathom a single reason why anyone would even remotely consider rostering him. He has gone EIGHT straight games without reaching double-digit fantasy points. That is not a typo. There is no upside here and there is also no floor, so for him to be priced just below Etienne is borderline hysterical. On top of all that, it’s not even a good matchup as the Cowboys rank as one of the toughest opponents for running backs this season. Do not play Dillon under any circumstance.