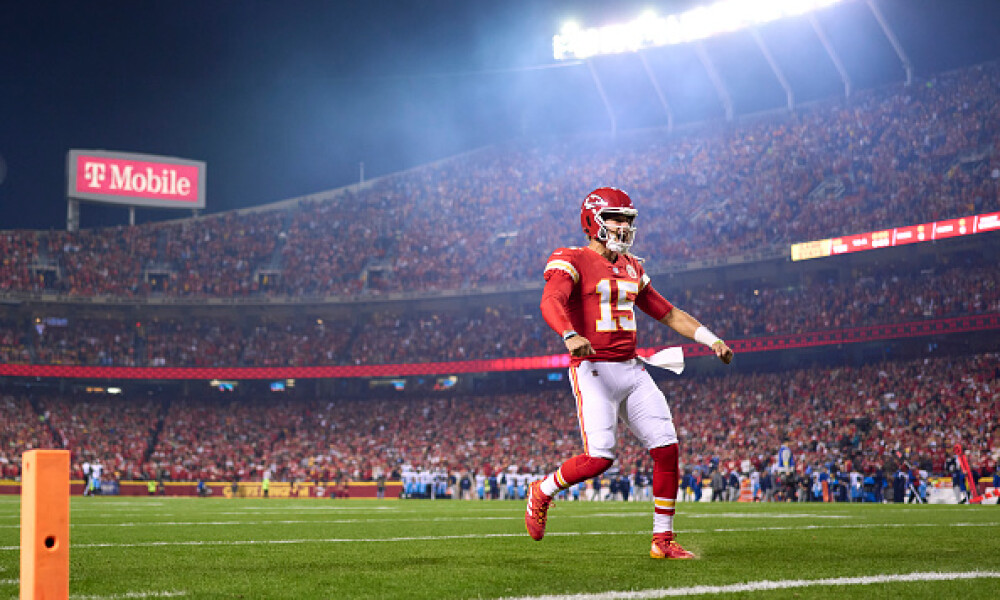 Week 9 if the NFL season is in the books and we made it through the “byemadgedon” which saw six teams on their bye week. In Week 10 we have four teams on bye with the Ravens, Bengals, Jets and Patriots all off this week. We have another 10 game main slate for Sunday but with some better options at the QB position this week to attack. Let’s break down the top plays values and fades for Week 10.

What can’t Mahomes do? In Week 9 we saw him take over the Chiefs game against the Titans with both his arm and his legs as he threw for 446 yards and a touchdown while adding 63 yards and a score on the ground. He also ran in the two-point conversion to tie the game. In Week 10 the Chiefs are home against a Jaguars defense that has really been hit or miss this season and in the first half of last week, we saw Davante Adams and Derek Carr tear them apart. I look for Mahomes and his bevy of pass catchers to put up some big points this weekend.

I mean, he has to be here right? He ran for 178 yards and a touchdown last week while adding three passing touchdowns as well against the Dolphins. We should see Chase Claypool play more than 35% of the offensive snaps this week as well as he gets more time to practice and learn the playbook. Oh yeah, did I mention Fields is also at home against the league's worst defense in the Detroit Lions? He is going to be the highest-rostered QB on the slate this week.

When you have receivers as good as Tyreek Hill and Jaylen Waddle you are going to find yourself putting up some great numbers this season and that is what we’ve gotten out of Tua this season. Last week against the Bears he completed 70% of his passes for 302 yards and three touchdowns. He now has 15 touchdowns on the season while averaging over 20 fantasy points per game. The Dolphins are home this week facing a Browns team that will be coming off their bye week.

We saw a breakout game from Prescott before the team went on their bye week as he threw for 250 yards and two scores while adding 34 yards on the ground and a rushing touchdown. In Week 10 the Cowboys head on the road to face a reeling Packers team that just lost to the Detroit Lions and have lost now five straight. I don’t think Green Bay solves anything this week and that Dallas defense will be all over the Packers and I can see a few turnovers in this one which will give Dak short fields and instant scoring opportunities.

Ok, so, this is pretty much the “last ride” for me when it comes to Russell Wilson. Denver is coming off their bye week and hopefully that time off allowed for Wilson to heal up and maybe for the coaches to reset and devise a gameplan here to get the offense going. The team acquired Chase Edmonds at the deadline to improve their running back room and Edmonds pass-catching ability will hopefully bring some new life to this Broncos offense that has plenty of talent in Courtland Sutton, Jerry Jeudy, and rookie tight end Greg Dulcich who has looked good in his three games this season.

Everyone is going to be playing Saquon Barkley this week against the Houston Texans but that doesn’t mean you can’t give a look at Daniel Jones here either at his low cost. Jones throws to Barkley often and he himself has shown nice rushing upside to help boost his fantasy production. As we know, the Texans defense is nothing to write home about.

The Dolphin’s defense has been giving up a lot of points this season and while Brissett hasn’t exactly been lighting up the scoreboard this season with fantasy production, he did have 21 fantasy points before the bye week against the Bengals and the combination of Amari Cooper and Donovan Peoples-Jones has been productive. Of course, this Browns offense is centered around Nick Chubb but with the way the Dolphins' offense puts points on the board, this could be one game where Brissett will be forced to throw.

What version of Lawrence will show up this week? For fantasy purposes, hopefully, the one that put up back-to-back 20+ fantasy point efforts in Week 6 and Week 7. With a matchup against the Chiefs' high-powered offense on tap we would expect Lawrence to find himself in a shootout here and while Travis Etienne has looked good, running the football will only get you so far against the Chiefs as their offense will eventually force you to throw. Christian Kirk has looked better in recent weeks and the combinations of Zay and Marvin Jones have had moments this year as well. This is a pretty good price for Lawrence and if you are stacking this game it may be easier to get Lawrence at QB and bring Kelce back the other way than stacking Mahomes and Kelce together.

Getting DeAndre Hopkins back has been great, but Murray has still been a bit frustrating at times, and being on the road this week against a divisional opponent in the Rams who have a good defense and who held him to just 16 fantasy points back in Week 3 just gives me an uneasy feeling. I don’t find the need to be spending up here for Kyler when there are better choices in better matchups at similar price points.