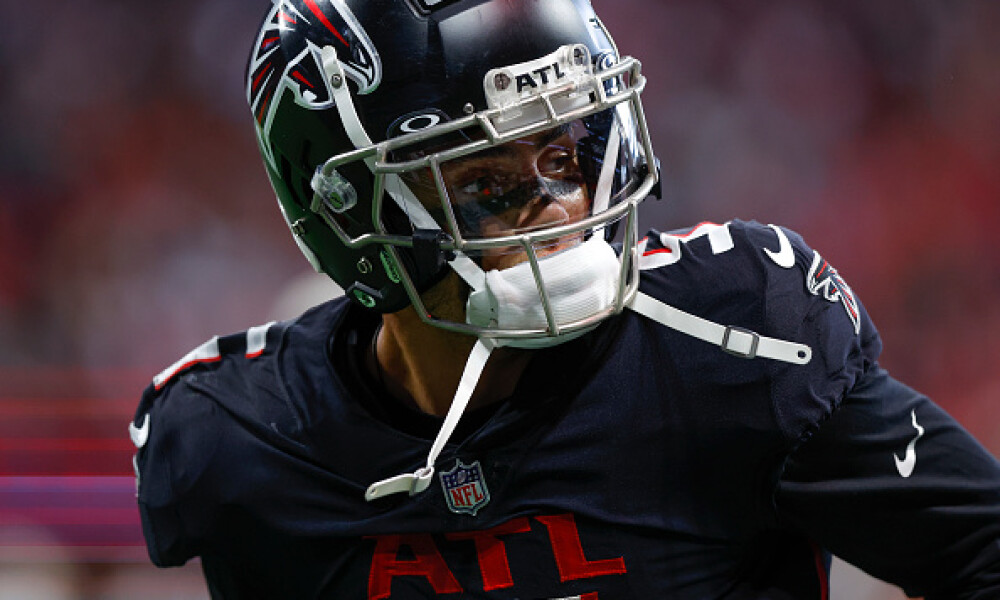 Week 3 of the NFL season is here and with the Thursday night football game behind us it is time to turn our attention to the NFL DFS Week 3 main slate over on FanDuel. This week we are looking to break down some players who have seen their salaries rise or fall from the past week and determine if they are worth their new price tags or not. Players like Jaylen Waddle, David Montgomery and Carson Wentz are all coming off big Week 2 performances while Cole Kmet, Tom Brady and Dalvin Cook left much to be desired. Make sure you are still checking out the fantasy football DFS player projections as well as checking out the NFL DFS lineup generator when building out your lineups.

London cracks the $6,000 price tag for the first time this season after being priced at $5,500 and $5,600 over the first two weeks of the season. While the $1,000 jump is a steep one it is also merited as the rookie has totaled 13 receptions on 19 targets for 160 yards and a touchdown through the first two weeks of the season. In Week 3 the Falcons head to Seattle to face a Seahawks defense that really isn't that good and should be exploitable by London in this matchup. I'd be willing to pay the bump for London in this matchup.

This will be the first time that Pierce is priced at $5,800 on FanDuel in Week 3 after coming in at $5,400 and $5,600 over the past two weeks. After seeing just 30% of the team's offensive snaps in Week 1 the team committed a bit more to the rookie RB in Week 2 against the Broncos as he finished with 15 carries for 69 yards. In Week 3 the Texans go on the road to face a Bears team that has struggled against the run this season. In Week 1 we saw the 49ers have success running the football even after the Elijah Mitchell injury and in Week 2 we saw Aaron Jones run all over them. Pierce should again see a high volume of carries in this game and this is a matchup where the Texans may be in position to score touchdowns as well on the ground.

The injury to Keenan Allen has opened up a lot of targets in this Chargers offense and Everett has stepped up to the plate big time through the first two weeks, totaling nine catches on 14 targets for 125 yards and a touchdown. Most of that production came in Week 2 when Allen was ruled out before the start. In that game Everett had six catches on nine targets for 71 yards and a score. Against the Chiefs in Week 2, Everett was only $5,500 on FanDuel so we have a slight bump here this week. The home matchup against Jacksonville is an appealing one but I think I will be fading given some other options at the tight end position this week.

What to do with Kyle Pitts? That has been the question all week long for seasonal fantasy and DFS players alike. Through two weeks the Falcons tight end has just four catches on 10 targets for 38 yards. His price was $6,000 in Week 1 and $5,900 in Week 2. In Week 3 he has maybe his best matchup of the season with Atlanta facing a Seahawks team that doesn't have Jamal Adams in the secondary right now due to injury. Taking the discount on Pitts could be a nice contrarian play this week and with a big week he likely wouldn't ever be cheaper than he is right now.

CMC has gotten off to a slow start here in 2022, totaling 135 yards and one rushing touchdown along with eight catches on nine targets for 50 yards receiving. In each of the first two weeks we saw McCaffrey priced up over $9,000  but this week, despite coming off a 102-yard rushing performance, he finds himself priced down to $8,500. Now, I recognize that the Saints defense is tough and that Baker Mayfield really does limit the offensive upside but this is a player that can be a game breaker so at $8,500, given how much he had been priced in recent weeks, I'd be willing to take stab here.

Carr has been priced a bit higher over the first two weeks of the season,  with a $7,400 price tag in Week 1 and a $7,300 price tag in Week 2. Through the first two weeks of the season Carr has completed just about 62% of his passes for 547 yards with four touchdowns and three interceptions. In Week 3 the Raiders are on the road but they face a Titans defense that has been horrid to begin the season, losing to the Giants and basically getting “mercy ruled” by the Bills in Week 2. I'd expect Carr along with Davante Adams and Darren Waller to have some nice games this weekend.