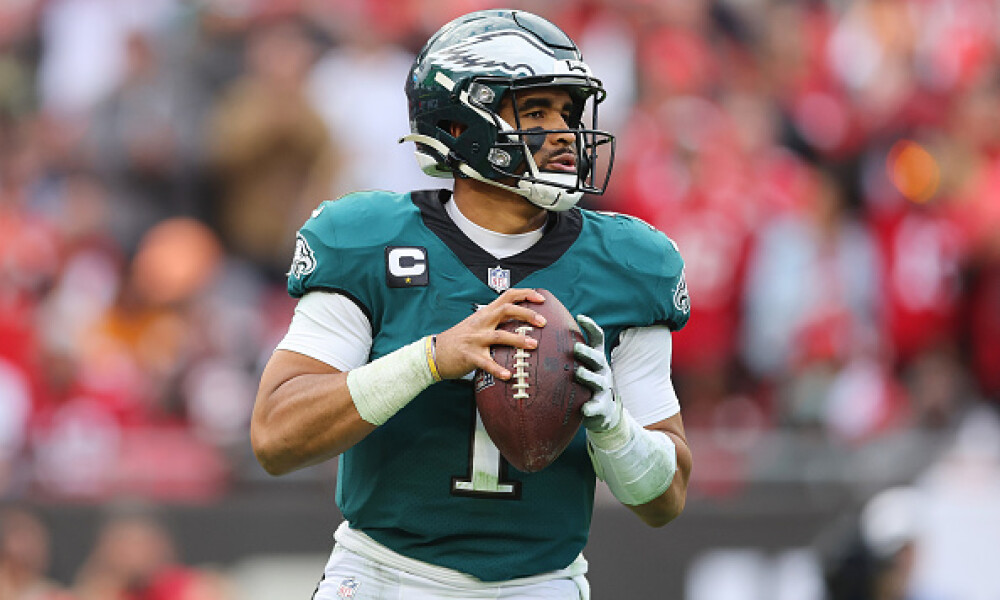 When you think about breakout fantasy quarterbacks you have to think about the skill set of that player and nothing helps the overall production of a fantasy QB more than his ability to run the football. You will notice that four of the top seven QB's coming off the board right now all have elite rushing upside with Josh Allen (QB1), Lamar Jackson (QB5), Kyler Murray (QB6) and Jalen Hurts (QB7) leading the way. Now, let's take a look at the historical ADP data for these QB's before they had their breakout seasons.

Of the four QB's listed above, Murray is obviously a bit of an outlier. He had a strong rookie season which saw him throw for 3,722 yards with 20 touchdowns and 12 interceptions while adding 544 yards and four touchdowns on the ground. THEN the Texans went and traded for DeAndre Hopkins in the offseason to give him a legitimate top-tier wide receiver and his ADP shot up the charts. That said, he still outproduced his draft slot and had a breakout season, finishing with 3,971 yards and 26 touchdowns while adding 819 yards and 11 touchdowns on the ground.

Lamar Jackson won his MVP during the 2019 season as he threw for 3,127 yards with 36 touchdowns while rushing for 1,206 yards and seven more scores.

Josh Allen probably should have won the MVP in 2020 but he instead finished second despite throwing for 4,544 yards and 37 touchdowns while adding 421 yards and eight rushing touchdowns as well. Allen even increased his rushing totals in 2021, running for a career-best 763 yards.

This brings us to Jalen Hurts. Hurts was drafted as QB12 last season on average and finished as QB9. While that may not seem like a big breakout, he was actually QB7 when it comes to fantasy points per game. Like those QB's above, Hurts is also an elite rushing threat, finishing last season with 784 yards and 10 scores on the ground over 15 games. He threw for 3,144 yards with 16 touchdowns and nine interceptions. Of the four above, Hurts is also being drafted the latest, going somewhere in the fifth and sixth rounds of most standard league drafts.

When it comes to QB's that could bring that type of potential this season there are two very obvious candidates in Trey Lance and Justin Fields.

Let's start with Fields as he enters his second full season as the Bears starting QB. As a rookie we certainly saw the ups and downs as the Bears were not a good football team and their offensive line was among the worst in football. The team's coaching staff also did Fields no favors led by Matt Nagy. In 2022 there is a new coach and offensives system in place and an offensive coordinator in Luke Getsy that has experience working with a mobile QB from his college coaching days.

As a rookie Fields appeared in 12 games, starting 10 of them. In those 10 starts, he threw for 1,800 yards with seven touchdowns and nine interceptions while adding 386 yards and a score on the ground. While those numbers are certainly nothing to marvel at, I think it is worth pointing out that over a 17-game season Fields would have been on pace to run for 656 yards which would put him in that near elite category for a QB when it comes to rushing production and that is something we are looking for here. Fields is currently coming off the board as QB17 with an ADP of 122.3 which means he is being drafted as a QB2 in most formats which will minimize your risk when drafting him while providing some really nice upside if the Bears improve under their new head coach and offensive system.

With Trey Lance there is much more of an unknown. He didn't get a ton of playing time last season but the mobile was on display and over a 17-game stretch his rushing totals per game would have had him finishing with about 700 yards. Lance is going much earlier than Fields as many are expecting him to be the breakout QB in 2022. Currently, Lance is QB13 with an ADP of 101.7.

Another possible QB with sneaky rushing upside is Jaguars quarterback Trevor Lawrence. As a rookie Lawrence rushed for finished with the seventh most rushing yards and fifth most rushing attempts for QBs. This mobility is not really new as Lawrence ran for over 500 yards during his sophomore season at Clemson and had 17 rushing touchdowns over his final two years in college. If Lawrence is going to flash this type of mobility then it's within his range of outcomes to get close to 500 yards rushing in a season and with the investments, the Jaguars made when it comes to receivers and the new coaching staff in place, there is a good chance the 2021 first-overall pick has himself a breakout season. Lawrence is currently coming off the board as QB23 with an ADP of 157.7.

Let's go back to the chart above with the breakout QB's because there is another factor when it comes to the success of those quarterbacks and that is the talent around the quarterback, in particular, that top-tier receiving threat.

In 2019, Lamar Jackson won his MVP. That was also the breakout year for Mark Andrews.  Andrews finished the year as TE2, behind Travis Kelce but going into that season he was being drafted as TE12.  Andrews became instrumental in the success of Jackson who improved his overall completion percentage in 2019 to a career-best mark and Andrews had a lot to do with that success throwing the football.

I mentioned above, but, during the 2020 offseason, the Arizona Cardinals swung a deal to acquire DeAndre Hopkins. Hopkins went on to finish the 2020 season with 115 receptions for 1,407 yards and six touchdowns. He finished the year as WR4 in PPR formats and Murray went on to finish as the QB2.

Murray finished as QB2 because Josh Allen finished as QB1 and what helped Josh Allen finish as QB1 you might ask? Well, the Bills went ahead and traded for Stefon Diggs from the Minnesota Vikings. At the time, Diggs was being drafted as WR21 but boy did he and Josh Allen hit it off as he finished the year as WR3, leading the league with 127 receptions and 1,535 yards.

You get the picture above? Give your QB an elite pass-catching threat and good things will happen.

This leads us to Jalen Hurts. What did the Eagles do this past offseason? Well, they went ahead and traded for A.J. Brown. Need I say more?

When looking at the rest of the QB landscape there are certainly a few more QB's that fit the mold of talent being put around them that may lead to that breakout year.

Derek Carr is the obvious name that comes to mind here. Carr is currently coming off the board as QB14 with an ADP of 108.0. The Raiders this offseason went and traded for Davante Adams. Adams has finished first and second in overall PPR scoring in each of the last two seasons and finally gives Carr a legitimate top-tier wide receiver. We've seen Carr put up solid numbers throwing to Darren Waller and Hunter Renfrow last season but that game is really going to change in Las Vegas this season with Josh McDaniels now the coach and Adams reuinted with his college QB.

Another QB that should be on your radar here is Jameis Winston. Sure,  Winston maybe doesn't fit the traditional mold of a breakout QB because he has already given us a top 3 fantasy season back when he threw for 5,000 yards and 30 touchdowns with the Buccaneers but right now he is coming off the board as QB23 and will have a healthy Michael Thomas, a healthy Jarvis Landry and rookie first-round pick Chris Olave catching the football this season. If those three stay healthy, it could be a downfield display put on by Winston this season with big yardage and big touchdown totals.

I'd be remiss if I didn't mention Tua Tagovailoa. Now, I personally am skeptical of Tua given what we've seen from him so far as an NFL QB and the fact that new head coach Mike McDaniel is bringing an offensive system that was much more run-centric during his time with the 49ers but the Dolphins went out and made a big trade for Tyreek Hill and last season Jaylen Waddle was one of the leagues more impressive rookie receivers. Tua certainly has the talent around him to breakout and is currently coming off the board as QB16.

On a smaller scale I think Mac Jones could be in this conversation as well. The new-look Patriots offense figures to weigh heavily on the second-year QB and the Patriots made some investments in the team's receiving group by trading for DeVante Parker and using a second-round pick on receiver Tyquan Thornton. The Patriots' offense also no longer lists a full back which was a calling card of Josh McDaniels when the Patriots wanted to be a run-heavy offense.

It's important to note that these are simply factors that can lead to a breakout season and not the road map to the pot of gold. If you look over time you will tend to see that not all players with elite mobility find success and not all players surrounded by great talent end up being that good either. What we are looking for are players at a great value where they are going in drafts and signs that they could be on the verge of a breakout year.  Draft wisely, use this information as part of your process not as your bible and you shall find success.