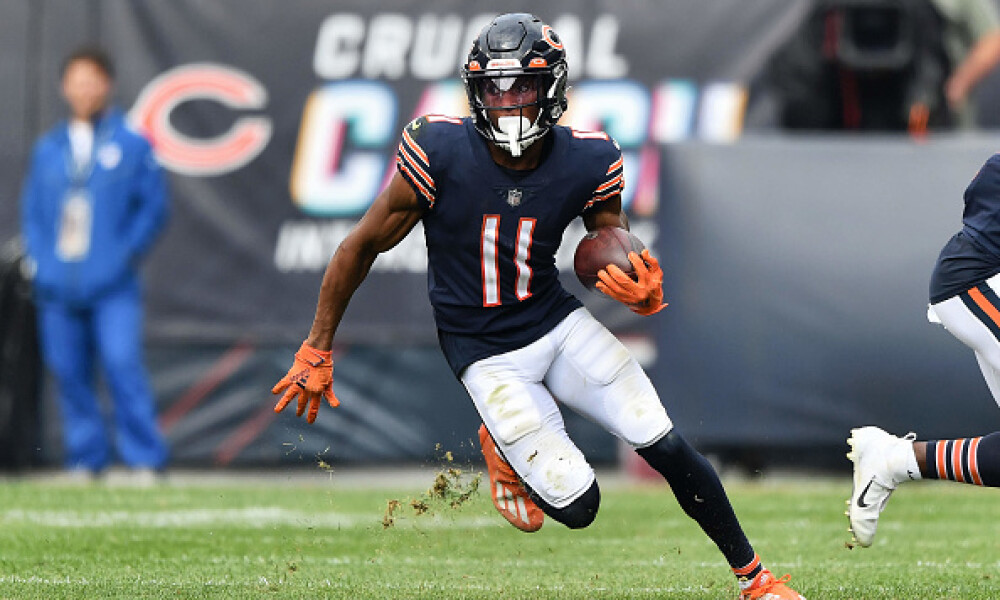 While every position is important in fantasy football, with PPR scoring and expanded rosters, wide receivers are arguably the most important. Getting a receiver who breaks out during the season, like Stefon Diggs in 2020 or Cooper Kupp in 2021, can help propel you to a fantasy championship. There are also some wide receivers who are set to bounce back from a subpar season, as well as those who are set to bust at their ADP. So who should you be targeting and who should you avoid? I’ve put together a few of my favorites below. Now let’s go win those fantasy championships!

Darnell Mooney was close to a breakout season last year, finishing as WR27 with over 1,000 receiving yards, but now he is in an even better situation as the clearcut number one wide receiver on the Bears’ roster. Along with his 4.38 speed, Mooney is an efficient route runner, ranking seventh in target separation and 11th in total route wins in 2021. Quarterback Justin Fields should also improve in his second season in the league, and Matt Eberflus will undoubtedly be a more effective head coach than Matt Nagy.

With Allen Robinson in the mix in 2021, Mooney garnered a 26.7% target share; now that Robinson is in Los Angeles, that number will inevitably increase. Even in an offense with lower passing volume, this large target share sets Mooney up to produce a huge number of fantasy points. At an ADP of 71.32, and with the massive volume coming his way, Mooney could be a mid-round league winner.

While Elijah Moore showed potential during his rookie season, injuries and missed games prevented him from truly breaking out in fantasy. When he was on the field, though, he looked great. He had a 47.8% route win rate, good for ninth in the league, and found the end zone five times in his final five games. His catch percentage wasn’t great, at only 55.8%, but a lot of that blame could be pinned on rookie quarterback Zach Wilson, who ranked near the bottom of the league in almost every metric. Wilson should take the proverbial step forward in his second year, and although they drafted Garrett Wilson, Moore should still earn plenty of targets with the departure of Jamison Crowder. The Jets ranked 32nd in-game script last season, and the passing volume should remain on the high side this year. If he remains healthy, Moore should easily be able to crack WR2 territory.

After finishing as a top ten wide receiver in back-to-back seasons, the fantasy community thought Allen Robinson was quarterback-proof. That all changed when he fell off the face of the fantasy planet last year, finishing as WR83 with only 80.3 PPR points through 11 games. A lot of that can be blamed on Bears’ head coach Matt Nagy’s playcalling, the quarterback carousel that ended with rookie Justin Fields running for his life behind an atrocious offensive line, and Robinson’s difficult bout with Covid-19. Now, Robinson has renewed life with the defending Super Bowl Champions, the Los Angeles Rams.

In 2021, the Rams passed at the 10th highest rate in the league, averaging 35.7 attempts per game. In doing so, they were able to sustain production for the overall WR1 in fantasy, Cooper Kupp, as well as a low-end WR3 in Van Jefferson. The Rams also utilized 11 personnel at the highest rate in the league last season at 83.4%, so there will be an opportunity for Robinson to be on the field and earn targets. Historically, when he earns targets, he produces, as we saw In his last healthy season in 2020. That year, Robinson ranked fourth in receptions, eighth in receiving yards, third in targets, and finished as overall WR9 despite only scoring six touchdowns. Robinson’s ADP is currently at 30.5, and now that he’s in a consistent offense with plenty of opportunities, he should easily return to WR2 form.

Although Courtland Sutton took a big leap in his second year in the league in 2019, finishing as WR19, he hasn’t been able to recreate those numbers since. He tore his ACL in the first game of the 2020 season, and last year's poor quarterback play didn’t allow him to fully maximize his field-stretching potential, with Teddy Bridgewater ranking 28th in deep-ball accuracy and Drew Lock ranking even worse. 2022 is a new year for Sutton, however, with Russell Wilson taking over under center; last season, Wilson ranked first in air yards per attempt, sixth in deep ball catchable pass rate, and 11th in deep-ball accuracy.

Sutton thrives in a field-stretching role, ranking second overall in average depth of target in 2021, and now that he has a more accurate quarterback, he should finally be able to reap the benefits of his deep routes. The Broncos were ranked close to the bottom in pass attempts per game last season, but that should change with new head coach Nathaniel Hackett. Sutton is currently going at an ADP of 52.64, but he has the potential to be a high-end WR2 or even reach WR1 territory.

I will be the first to admit that I was 100% in on Amon-Ra St. Brown having a monster rookie campaign last year, and by the second half of the season, it happened. In Weeks 13-18, St. Brown was second among all wide receivers in fantasy scoring behind only Cooper Kupp, finding the end zone five out of the last six weeks and seeing double-digit targets in each game. However, we preach about opportunity and situational factors in fantasy football to avoid being blinded by stellar numbers or finishes, and that is just what St. Brown capitalized on. In that final stretch, the Lions were without star tight end T.J. Hockenson for five games and starting running back D’Andre Swift for four games, leaving St. Brown as the only real target for Jared Goff. During that span, he saw an enormous 31.1% target share, something that just cannot be sustainable going forward.

To add to the equation, the Lions also brought in target competition by signing D.J. Chark in free agency and drafting Jameson Williams. Hockenson and Swift are healthy this season as well, and there just aren’t enough targets to go around in this offense. The Lions only averaged 34.9 pass attempts per game in 2021, and Swift commanded a large 18.8% target share in the ten games before he got injured. St. Brown is currently being drafted at a 67.2 ADP across platforms, and that just seems to be closer to what we can expect for his ceiling rather than his average. If he falls, the upside is there, but beware of expecting similar production in 2022.

Gabriel Davis came on strong at the end of the 2021 season, scoring five touchdowns in Weeks 12-14, but the rest of his numbers on the season were lackluster. He only saw a 10.9% target share, good for only 87th in the league, and he only ranked 103rd in snap share and 88th in routes run. If you read my piece on factors to consider when drafting wide receivers, you know that target share and snap percentage are vital to fantasy success, and Davis’ numbers do not impress in that department. His catch percentage is also troubling; on the season, he only caught 55.6% of the small number of targets thrown his way, 87th in the league.

So what about vacated targets? The Bills let Cole Beasley and Emmanuel Sanders walk in free agency, so that should count for something, right? Well, it doesn’t matter as much as you think. They brought in Jamison Crowder and drafted Khalil Shakir, so the amount of vacated targets will be minimal and definitely not enough to boost Davis in the fantasy WR2 tier. Davis’ ADP varies widely across platforms, the lowest being 50.10 on Underdog and the highest being 92.7 on Yahoo, but if you draft him in that range, you’re expecting him to put up big numbers. As with St. Brown, you’re drafting him at more of his ceiling than his average or floor.