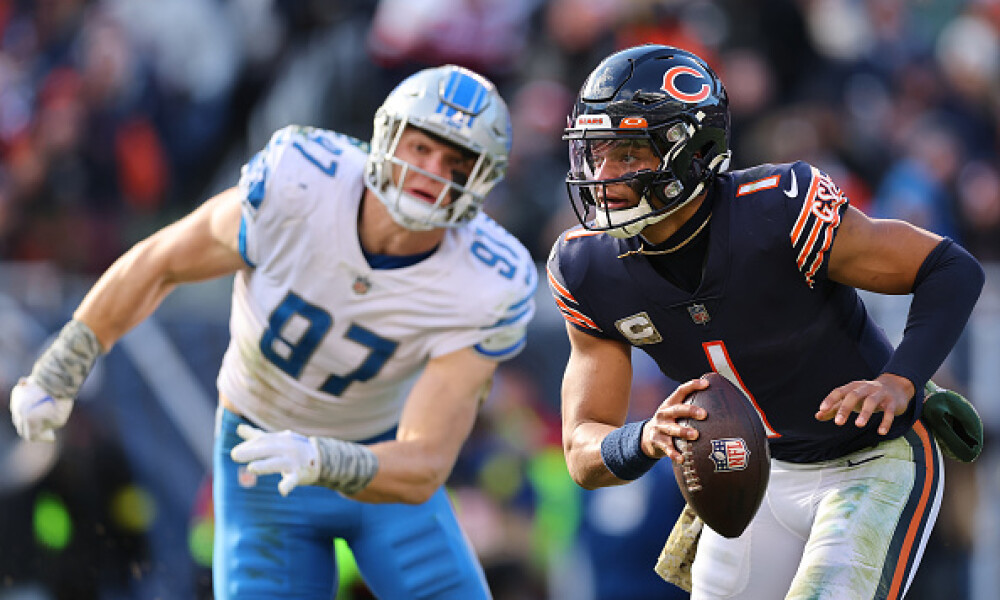 The 2022 fantasy football season is just a few months away which means it is time to start preparing for your upcoming fantasy football draft. Here at Fantasy Alarm we preach to go into each draft season with a plan on you will go about attacking each round of your draft by creating your own fantasy football player rankings and testing out different strategies in fantasy football mock drafts. Today we take a look at some late-round quarterbacks that should be on your radar that have the upside to outperform their ADP and maybe find their way into your starting lineups this season.

Let's start this off with my favorite late-round QB selection in Justin Fields. Over the past month we are seeing Fields coming off the board as QB16 with pick 114.03. There is no question that Fields struggled with inconsistency during his rookie season but that's not too shocking for a rookie quarterback, especially one in an offense that was being managed by an inept head coach in Matt Nagy who was shown the door this offseason. That said, over Fields final five starts of the season he put up 17 or more fantasy points in four of them and the one game he failed to produce he actually was injured in.

Another reason to like Fields is the rushing ability. Fields played in just 12 games as a rookie, starting 10 of them, and finished with 420 yards rushing. You take the per 17 game total there and Fields was on pace to rush for over 600 yards. Quarterbacks with rushing upside tend to have a nice fantasy floor and a very high fantasy ceiling in games where that rushing upside is on full display like it was in Week 8 of last season against the 49ers where he had 10 carries for 103 yards and a touchdown. He had a season-high 25 fantasy points that week.

The Bears new offensive coordinator Luke Getsy is also no stranger to working with mobile quarterbacks either, as pointed out by Andrew Cooper on the Lightning Round Podcast

Now, I'm not suggesting that Fields is going to be used in the same capacity but Getsy is a man that understands how to play to the strength of his quarterback.

My expectations for Fields this season are simply that he takes a step forward now that he has a full season in the NFL under his belt. I look for him and Darnell Mooney to continue to develop their connection and tight end Cole Kmet to provide a nice security blanket for Fields this season in the team's passing offense. Fields has a strong arm and is athletic. Those are two ingredients that make for a nice late-round QB selection.

Yes, another member of the 2021 NFL rookie QB class. Wilson's rookie season was abysmal as he completed just 55% of his passes while throwing more interceptions than touchdowns. That said, I REALLY like what the Jets are doing and that is a tough pill to swallow as someone who is a Patriots fan. I believe in head coach Robert Saleh and really like the team he is starting to put together. First, the Jets offensive line ranked 11th in football last season despite the fact that Mekhi Becton played in just one game. The Jets also went and signed Laken Tomlinson during free agency who went to his first Pro Bowl last season. Protecting Wilson is the name of the game because the Jets are starting to surround him with some real talent. Last season they drafted Elijah Moore and this year they used 10th overall pick on Ohio State standout wide receiver Garrett Wilson who at 6-foot-0 ran a 4.38 40-yard dash at the NFL combine. The Jets still have Corey Davis and signed tight end C.J. Uzomah in the offseason as well to solidify that role in their offense. In the backfield, the Jets drafted maybe the top running back in the draft in Breece Hall to pair with last year's rookie running back Michael Carter who flashed some very nice upside, particularly in the passing game last season. It's not going to cost you much of anything to take a stab at Wilson in your fantasy football drafts this season as he is currently coming off the board as QB25 over the past month.

There is certainly some risk with this pick as Jameis Winston is coming off a torn ACL that ended his 2021 season and there have been some reports that he still doesn't look 100%. That said, he is only coming off the board as QB24 with an ADP of 151.17 over the past month so the risk here is minimal as he is being drafted as your QB2 or QB3 in best ball formats. We like Winston for a few things, first, he was actually pretty good last year, throwing 14 touchdowns with just three interceptions in his seven starts. Second, the team has improved their receiver room. Michael Thomas is expected to be healthy and on the field this year after missing last season. The team signed Jarvis Landry in free agency and then used the 11th pick in the draft on Ohio State receiver Chris Olave. The Saints are also apparently transitioning Taysom Hill to tight end which brings yet another pass catcher in the mix to go along with Adam Trautman at the position. Oh yeah, Alvin Kamara, at least for now, is also in the backfield. If Winston can show that his knee is healed up then he will be a popular late-round option for many and could very well see his ADP rise once training camp begins.

A third-round pick last season, Davis Mills didn't really the same fanfare that the rest of the 2021 QB rookie class got but he rivals Mac Jones for having the most successful rookie season of the group. In 13 games, 11 starts, Mills completed 66% of his passes with 16 touchdowns and 10 interceptions. He comes into this season with the starting QB job on a team that is expected to play from behind for most of the year which means Mills will be throwing aplenty. At receiver Mills still has Brandin Cooks and there is high expectations for Nico Collins this season as he enters his sophomore season. The Texans also used a second-round pick on Alabama slot receiver John Metchie but he is coming off a torn ACL and does not have a timetable for when he will make his NFL debut. Mills is coming off the board as QB28 with an ADP of 188.02 over the past month but after a nice rookie season, a strong training camp could see him start to move up draft boards.