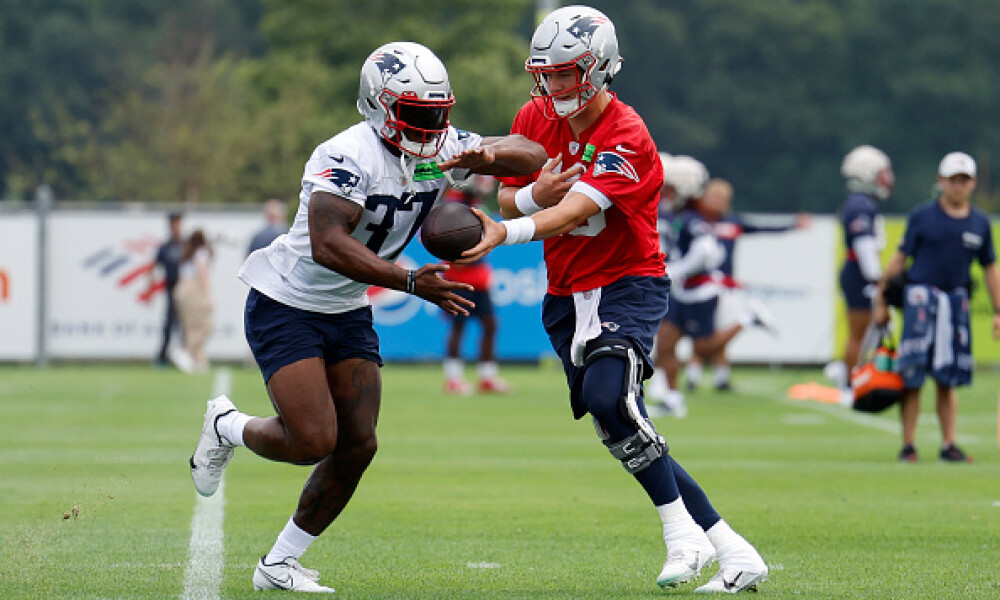 NFL Training Camps are in full swing ahead of the 2022 fantasy football season and we have plenty of NFL news, injuries, trade rumors, and practice updates. The New England Patriots headline today's training camp report with Damien Harris involved in NFL trade rumors and James White announcing his retirement. Both news items should push Rhamondre Stevenson up the fantasy football player rankings this preseason. Plus, we have another update on Deshaun Watson and the Cleveland Browns before their preseason game on Friday. Finally, a couple of key NFL injury news may impact fantasy football ADP and 2022 pre-season projections in the coming days or weeks. Don't forget to check out Fantasy Alarm's FREE Fantasy Football Draft Guide! We're helping you prepare for your fantasy football drafts before the regular season gets underway. Let's now dive in to the top NFL news and headlines during Training Camp and give you fantasy football advice involving the biggest stories.

This is the question we're all wondering today after an interesting report on Wednesday night. Albert Breer of TheMMQB.com notes that the New England Patriots may consider trading Damien Harris before the season begins. Harris is set to become a free agent in 2023 and it's highly unlikely the Patriots will give him a contract extension. This NFL trade rumor has some big fantasy implications for redraft leagues and dynasty fantasy football. Firstly, Rhamondre Stevenson would stand to benefit a ton if he becomes the clear starting running back in New England. Then there's rookies Pierre Strong and Kevin Harris, either of whom could step into a bigger role this season and in the coming years. Plus, Ty Montgomery and J.J. Taylor are on the roster and could be viable PPR options at some point this season – especially following James White's retirement. As for Damien Harris, he could wind up on a RB-needy team and step into a clear starting role to still be a solid fantasy option. Of course, this will all be moot if the Patriots stay put and don't trade Harris away. It's definitely worth monitoring though.

On Thursday morning, longtime New England Patriots running back James White announced his retirement on Twitter. He'll surely be missed for those of us who enjoyed rostering him in PPR leagues over the years. White dealt with injuries most of last season and began training camp on the PUP list this year. This news is especially interesting timing-wise since it comes the morning after Damien Harris' name was included in trade rumors (see above). The Patriots backfield becomes very intriguing. Rhamondre Stevenson is the name everyone is hyping up now as the guy who could see more pass-catching opportunities in New England. Keep an eye on Ty Montgomery, though, who signed with the Patriots in the offseason and has plenty of experience being a receiver out of the backfield.

As if he wasn’t in the news enough, we have another development involving Deshaun Watson. The Cleveland Browns announced yesterday that Watson will start the team’s preseason opener against the Jacksonville Jaguars on Friday. This is notable for a few different reasons. First off, Watson is indeed eligible to play in the preseason before his six-game suspension by Judge Sue L. Robinson kicks in on the final day of roster cuts, according to ESPN’s Jeff Darlington. However, we’re still waiting on a decision regarding the NFL’s appeal for reportedly an indefinite suspension of at least a full season. Darlington notes that if the decision comes before Friday, Watson may not be allowed to play in the preseason at all or participate in team activities. If the Browns quarterback does end up playing, this would be his first NFL game action since the end of the 2020 regular season. It makes sense that the Browns want to get their quarterback some semi-meaningful snaps even if their other starters aren’t out there – suspension or not.

The latest Tampa Bay setback along the O-line apparently isn’t as bad as Ryan Jensen’s serious knee injury suffered on the second day of camp. Buccaneers’ offensive lineman Robert Hainsey was carted off the field during Wednesday’s practice, but ESPN’s Jeff Darlington reports it was just bad cramps instead of anything worse. That’s good news for Bucs fans and those of us who are drafting any Tampa Bay skill players in fantasy football. Hainsey is filling in as the team’s starting center for the injured Jensen, who’s expected to be out until at least late November or December.

In the wake of Tim Patrick’s season-ending ACL injury, it looks like tight end Albert Okwuegbunam could have a bigger role in the Denver Broncos offense this year. Albert O, as most fantasy football managers know him by, is gaining plenty of buzz during training camp and is listed as the Broncos’ starting tight end on their first unofficial depth chart – in front of rookie Greg Dulcich. Head coach Nathaniel Hackett says the offense is putting Okwuegbunam “all over the place, from motioning, playing wide, playing ‘F’ and doing all kinds of different things,” per Andrew Mason of DenverFan.com.

Obviously, we’ll see what his true role and production are when the regular season starts, but it appears Albert O will be plenty involved in the Broncos attack. The opportunity for more tight end snaps is there with Noah Fant gone. He could wind up being a favorite target for Russell Wilson and prove to be a nice value at his current fantasy football ADP in the 12th round of 12-team leagues. If you’re going to draft Okwuegbunam this season, just make sure you can pronounce his name at your fantasy football drafts. There’s really no excuse when the guy provides the phonetic spelling of his last name in his own Twitter bio.

Philadelphia Eagles wide receiver DeVonta Smith has now missed five straight practices with a groin injury. Head coach Nick Sirianni says that Smith is “day-to-day,” so it doesn’t seem like anything serious. Still, that’s almost a week’s worth of missed practices for Howard Bender’s WR38 in his fantasy football player rankings. We’ll see if Smith returns to practice soon, but a groin injury is something that could pop up during the season again. At least it’s a good sign that the Eagles wideout was running drills off to the side of practice on Wednesday.

If you’ve drafted any New England Patriots in fantasy football already, or are considering doing so, you may want to listen up for a minute. There have been tweets, reports and rumbles about this, but it appears the Patriots offense is looking terrible in training camp practices so far. The Athletic’s Chad Graff has a bunch of worrying quotes and observations in his recent article, but a quick search on Twitter shows plenty of New England reporters voicing the same opinions. Specifically, Graff notes that the quarterbacks are under constant pressure, the wide receivers aren’t getting open, the running game is struggling, and the offense is being dominated by the Patriots’ defense in scrimmages.

Since longtime offensive coordinator Josh McDaniels is now with the Raiders, the New England offense is going through a significant transition this offseason. Offensive coaching duties are, believe it or not, now falling on the shoulders of Matt Patricia and Joe Judge as both ex-Patriots coaches are back with the team in offensive roles. Simply put, this is not good news for those who are expecting Mac Jones to develop more in his second season. Maybe it amounts to nothing, but it’s still worrisome with the season a month away.