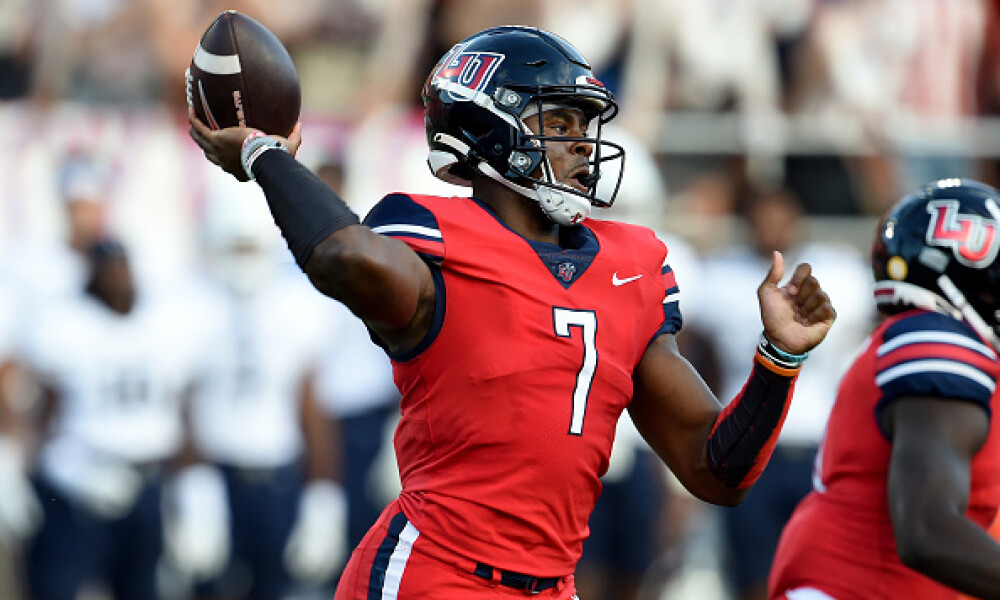 Over the last couple of weeks, I’ve written about how a typical fantasy football dynasty rookie draft might play out based on trends, community sentiments, and drafts I’ve participated in. The results of the first two rounds are listed below. While there is still some meat on the bone entering Round 3, this is a thinner class of fantasy football rookies than most and it’s hard to say what will happen in this range. I do think you can expect a lot of quarterbacks and tight ends start to go as the two primary positions get soaked up in the earlier rounds, which is reflected here. This is a draft range where you can nab some fantasy football sleepers that can boost your roster. Let's take a look at the third round of the dynasty fantasy football rookie mock draft!

Robinson was insanely productive in his one season at Kentucky after transferring from Nebraska, reeling in 104 grabs for 1,334 yards and seven touchdowns. He is undersized at 5-foot-8, and 178 lbs. but ran a 4.44 40-yard dash at the Combine. He clearly projects as a slot receiver at the next level. I generally do not invest in players of his physical stature, but he is sneaking into the second round of some rookie drafts, so I don’t see him falling much past this range. He is going to struggle for production out of the gate given the Giants’ talent at the receiver position, but the second-round draft capital given to him by first year coach Brian Daboll means he’ll likely be given every chance to earn a role in the near future.

Robinson should be a familiar name for those who keep up with college football, as he has been sprinkled in for carries in the Alabama backfield for five years now. After toiling away behind the gluttony of star backs for the Crimson Tide despite flashing ability of his own, Robinson was finally the lead back in 2021 when he racked up 1,343 yards and 14 touchdowns on 271 carries (5.0 YPC) and added 35 receptions for 296 yards and two scores. As one would expect after a five-year college career, he is on the older end having just turned 23, but he has feature back size and ran a solid 4.53 40 at the Combine. At this point in rookie drafts, I love targeting rookie running backs that are “blocked” on the depth chart (which Robinson is by Antonio Gibson) but have the talent to take advantage of an opportunity if it presents itself.

Willis’ fall in the 2022 NFL Draft was surprising at the time, but his stock in the court of public opinion was probably always a little falsely inflated in a quarterback class that lacks other upside options. While Willis’ athletic ability and arm are tantalizing, he is an extremely raw prospect. Ryan Tannehill may not be openly taking Willis under his wing, but the rookie will gain valuable experience behind the veteran whose contract the Tians can get out of at a reasonable number after the 2023 season. Willis will be given all the time he needs before seeing the field. It may take a while, but he is a worthwhile investment for dynasty owners in this range if you have the space/taxi squad to store him. He could be an electric dual-threat quarterback in dynasty fantasy football if developed properly.

What this quarterback class lacks in upside, the skill positions lack in depth. Thus, I expect there to be a run of quarterbacks in the third round of rookie drafts when the running back and receiver pools start to dry up.  Ridder has as good of a chance as anyone outside of Pickett to garner playing time this season, with high third-round draft capital and only Marcus Mariota in front of him on Atlanta’s depth chart. Ridder has a high football IQ and was a four-year starter at Cincinnati but lacks elite physical talent and played inconsistently at times. Despite a limited long-term ceiling, he has the floor that could turn him into a multi-year NFL starter.

Dulcich is the best pure pass catching tight end in this class, and I expect dynasty owners who are needy at the position to target him first among his peers as a result. He had an robust 17.6 yards per reception with 11 touchdowns on his 77 college grabs, operating as a monster down the seam and in the red zone for UCLA. His production is particularly impressive when considering his size (6-foot-4, 243 lbs.) and the fact that he consistently played in-line, which should help him get on the field quicker in the NFL. The Broncos took him in the third round, giving him solid draft capital and tying him to an elite quarterback in Russell Wilson. Albert Okwuegbunam is a good player, but I expect Dulcich to push him eventually.

Allgeier has some serious fanboys in the dynasty community, so I could see him going even higher than this if one of them is in your league. His production was prolific over the last two seasons at BYU: a combined 2,731 rushing yards (6.4 YPC) and 36 touchdowns on the ground to go with 42 receptions for an additional 373 yards through the air. He didn’t test particularly well at the NFL combine (4.60 40) and didn’t go until the fifth round, but his feature back size combined with receiving versatility and pass blocking should translate well to the NFL. The Falcons have a thin depth chart in front of him in Cordarrelle Patterson and Damien Williams, and one could argue Allgeier is the best pure runner of the three.

Williams was one of the biggest losers of the pre-draft process for me. After carrying Notre Dame’s offense for the last two seasons, he produced absolutely awful athletic measurables (4.65 40-yard dash, 32” vertical, 9’8” broad jump) for a back his size (5-foot-9, 194 lbs.). Despite his three-down production for the Fighting Irish, his stature means he will never be a three-down back at the next level. If anyone can squeeze production out of a running back, though, it’s Sean McVay, who took Williams in the fifth round. Cam Akers is a violent runner who is susceptible to getting banged up, and Darrell Henderson has yet to establish himself as the clear backup.

McBride is the best real life tight end in this year’s class, and his counting stats over the last three seasons (2,011 yards on 157 receptions) had him among the nation’s leaders at the position. No one who has watched McBride’s tape would call him dynamic, and his athletic testing confirmed as much. His touchdown output (6% of his career catches) was also pretty abysmal for a top tight end. Still, Arizona invested second-round draft capital in him and clearly has plans to use him. Unfortunately for his fantasy production, that may mean a lot of blocking as they also resigned Zach Ertz and he has never been a blocker. This is where McBride will go in drafts, but he is clear future roster-clogger in my eyes.

Corral continues the run of quarterbacks in this round as we get to true lottery ticket territory in this year’s thin class. Matt Rhule and the Panthers had been connected to nearly every available signal caller this offseason before taking the rookie in the third round. The former Ole Miss Rebel thrived the last two seasons under Lane Kiffin, but his highs were in large part washed out by his lows as he struggled for consistency. While Kiffin’s system may have better prepared him for whatever pro scheme he ends up in, it may have inflated some of his production, which was stellar in certain areas such as completion percentage and yards per attempt. Rhule seemingly does not have much of a leash with his job status, making him more likely to roll the dice on the rookie at some point this year. There are weapons in place that could help him become a productive starter if he progresses under Rhule.

I wrote glowingly about Howell in my pre-draft quarterback preview, but NFL draft capital matters and him falling to the fifth round is a big indictment on how NFL evaluators feels about his chances of success at the next level. When I watch him, I see a less accurate Baker Mayfield with a much better arm. As Josh Allen has taught us, accuracy is something a quarterback can improve upon. Howell throws an absolutely beautiful deep ball and landed on a team that has excellent deep threats, including his college teammate Dyami Brown. If you are banking on Carson Wentz playing 17 games this season, I’ve got some beach front property for you in Nebraska. Howell should get a chance to prove himself at some point, and I think he is good enough to take advantage.

Seemingly lost in the buzz of the Packers’ selection of Christian Watson in the second round, Doubs went in the fourth round and brings with him solid age adjusted production, albeit from a smaller school in Nevada. Doubs did not run at the NFL Combine and at 6-foot-1, he does not profile as a number-one NFL receiver, but we've seen all shapes and sizes of receiver thrive with Aaron Rodgers and the Packers’ receiver depth chart is wide open. He is a worthy dart throw at this point in drafts.

Jones has been the butt of many jokes after turning 25 years old shortly after the NFL draft. To put that into context, he is a month younger than DJ Moore, who is entering his fifth NFL season. His only real season of production came as a 24-year-old against 19–21-year-olds. That didn’t stop the Bears from selecting him in the third round after they lost Allen Robinson in free agency. Targets are up for grabs in Chicago’s offense, as dysfunctional as it might be in real life. Someone in your league is going to chase those targets around this point in the draft, age-adjusted production be damned.