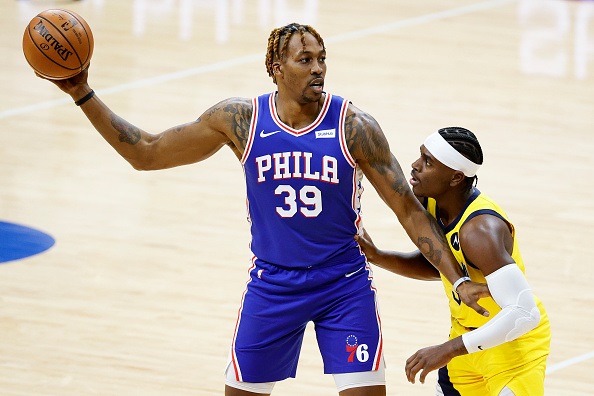 It’s showcasing month as the NBA trade deadline is coming up and we will continue to see rosters open up a bit more, especially those with a lot of depth in certain areas. Teams want potential suitors to see more of that player participating in different match up so they can scout these guys. Poor play is sometimes ignored because the team is desperately trying to move a contract. Look to see what players are getting a bump in minutes, even if it’s only for a few weeks. We’re running out of time this year and every little bit helps. Here are some of the players you should target off of waivers.

Dwight Howard C PHI-26% Investment Percentage: With Joel Embiid out for the next few weeks, Howard should see more run and when he’s called upon to play more minutes, he continues to prove even at the twilight of his career that he doesn’t need a lot of time to produce point, boards and blocks and Howard has grabbed double-digit rebounds his last two contests. Expect Howard to be playing 27 to 20 minutes per game until Embiid returns to action. Howard has swatted away shots in five of his last six games. Howard doesn’t have any moves in the post but when Ben Simmons comes back he should be able to execute frequent pick and rolls without much issue.  Howard has scored in double figures in two of his last three contests and he’ll take advantage of his next few match ups versus the Spurs and Knicks.

Cody Zeller C CHA-20% Investment Percentage: Zeller is a very boring player to invest in, but until the Hornets take him off the floor and get a skilled big man to clog the lane, Zeller will still get consistent minutes. Don’t expect anything major when it comes to stats from Zeller, but he’s a viable final big man to have off the bench because like his average shows, he can still score 10 points and grab 7 to 8 rebounds per game. Zeller is also coming off of a two-steal outing and he faces the Kings and the Lakers in two of his next three battles and he could certainly see a high production ceiling. The Hornets will opt to shift PJ Washington to Center, but Zeller should still get at least 25 minutes per game for the rest of the season.

Rudy Gay F SAS-23% Investment Percentage: By default, Gay’s scoring ceiling has been lifted because LaMarcus Aldridge and the Spurs have ended their business relationship. Gay has scored 13 or more points in his last 2 games and he could still hit shots from the elbow and arc. Gay should see double-digit shots most nights and Trey Lyles will be his main competition for shots along with Keldon Johnson but the latter has been struggling for the most part in recent weeks. Gay grabs over five rebounds per game. Gay also grabs nearly a steal per contests and we will have to see if the Spurs bring in anyone else via trade but until that happens, Gay has staying power on rosters. Expect him to get 10 to 13 shots per game moving forward.

KJ Martin Jr. SF HOU-23% Investment Percentage: Martin has pedigree as his Dad was one of the better bangers in the post in the 2000s and now with Houston depleted when it comes to size, Martin is getting the chance to prove himself. P.J. Tucker is done with the team and with Christian Wood still out, Jae’Sean Tate needs help in the post and Martin has grabbed nine or more boards in the two games he’s played in since the All-Star break. He is averaging over 30 minutes in both games and there’s no reason to think that he will not continue putting up production. The guy blocked four shots in two games and he’s coming off of a three-steal game. Kevin Porter Jr. and Martin should be regular part of the rotation and the Rockets could be shipping out Victor Oladipo prior to the trade deadline. If he has one more big game, he won’t be available at all to add.

Markieff Morris PF, C LAL-4% Investment Percentage: Marc Gasol is out of the Lakers rotation and Anthony Davis is still hurt and Morris has been getting more run except for his most recent games. Morris has hit double figures in scoring in three of his last four games. Morris has hit multiple three-pointers in his last four battles and he’s even grabbed six or more boards in three of his last four outings. Even when Davis comes back, the Lakers are likely to play it slow with him and might have him sit out a decent amount of games to preserve his health for the playoffs. Morris' main competition for minutes at this point is Montrezl Harrell , but he should be able to keep his minutes in the late-20’s for the most part. Morris has also blocked shots in two of his last three games.

Jaylen Nowell SG MIN-5% Investment Percentage: There are more open minutes and shots in Minnesota until D’Angelo Russell and Malik Beasley return to the floor. Beasley is about halfway through his 12-game suspension and Russell needs a little more time before returning and Nowell has scored 10 or more points in 5 of his last 7 games. Nowell continues to get a true rotation commitment as he’s hit the 20-minute mark in his last 5 contests. Nowell gets a decent amount of shots and is often used as a bailout option, but, lately, he’s grabbed five boards and a steal in three of his last five contests. Nowell has also seen his assist average rise a bit lately as well and he has short-term value. The Timberwolves don’t have a lot of consistent mid-court scoring and Karl-Anthony Towns needs secondary scorers if his PF’s aren’t going to help him out. When Towns is in the post, Nowell will be open at the arc a ton for high-percentage shots.

Justin Patton C HOU-7% Investment Percentage: Going small continues to not work for the Rockets and by default, Patton should continue to see at least 25 minutes per game. He’s hit double figures in scoring in three of his last five games. Patton has been under the radar when it comes to helping out produce other stats. He grabbed five or more boards in his last five outings and he grabbed steals and blocked shots in four of those games. In fact, Patton has grabbed at least three steals in three of his last four games. Patton gets a lot of match ups with weaker frontcourts over the next few weeks and he should be able to keep his minutes and he’s grabbed 1.4 blocks and steals per game this year and he can stretch the floor and hit three’s as he nails nearly one three-pointer per game. Expect Patton’s rebounding to continue to improve as he gets more reps with this squad.

Justise Winslow PF MEM-15% Investment Percentage: The Grizzlies are monitoring Winslow’s minutes as they want to keep him healthy, but he’s consistently playing in the 20’s and he’s starting to produce a bit more. Winslow has grabbed at least six boards in his last three contests, dishing at least four dimes in two of those games. Winslow is a good ball-handler and can help Ja Morant bring up the rock. Winslow has blocked shots in four of his last five outings and his scoring has been down, but as the season continues, the shots will come. Winslow has actually taken double-digit shots in two of his last three games. He’ll help out with steals a bit more as he shakes off the rust and picks up playing time. Winslow averaged double-digits in scoring in two of his last three seasons.