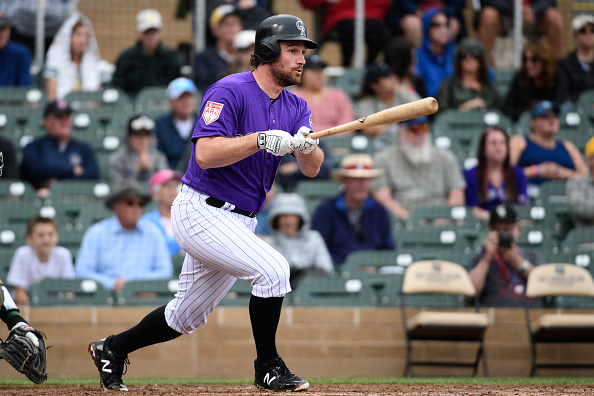 More injury issues could arise, but draft data seems to be settling in with Tout Wars on the horizon and fantasy baseball draft season in the air. All the charts illustrate varied average draft position (ADP) dating back to November to provide clarity for those making last minute adjustments to draft boards. Each position will be covered in an attempt to sift through the tough decisions, especially in the early rounds with next week’s column to focus on upside plays with the season fast approaching.

Due to his season ending injury, Salvador Pérez has been deleted from the catcher charts which, as will be seen, causes inflation in the NFBC draft data. Since its format requires two catchers no matter the league size, waiting too long at catcher could be a mistake going forward. For this week’s article, the ADP reflects all the 12-team drafts during the first two weeks of March when trying to discern when to target a player. Remember, ADP’s a guide, not the bible. If one needs or wants a player, take him. This process elucidates when they will be taken on average.

Not reflected in this chart, Welington Castillo continues to climb the draft charts. He’s up to ninth overall at pick number 211.34 on average with a range of 158-to-253 if looking to “Beef” up your roster. Over the last three years, Castillo has appeared in 261 games with 102 runs, 40 home runs, 138 RBI, three stolen bases and a .270/.319/.443 line. Not too shabby in this current catcher environment.

Also rising in value, Robinson Chirinos . He’s up to the 12th catcher off the board in March with an ADP of 236.43 and a range of 179-to-286. There’s upside in his power shifting to Houston. 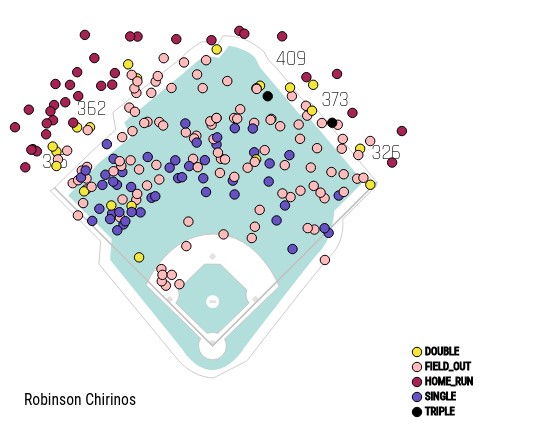 A pull hitter heading to Minute Maid Park? He could hit 20 there if Chirinos accrues enough at-bats.

Last, note Danny Jansen ’s precipitous rise in the charts. He’s no longer a sleeper, the helium’s strong with this rookie. Another rookie continues to rake this spring, Francisco Mejia , but the team already stated Austin Hedges defense will get him the larger share at-bats. But, if Mejia gets 40 percent, there’s upside, but enough to justify reaching?

While things seem to be settling in atop the first base ADP’s, there’s movement in the next two tiers. It starts with Joey Votto forging ahead of Matt Carpenter . Votto benefits with an improved lineup in Cincinnati this year and if his power rebounds, he’s a bargain. As for Carpenter, he scores runs and home runs, but, over the last two years, Justin Smoak ’s hit three more home runs and driven in 12 more runs than Matt Carpenter , with a higher batting average, yet falls over 150 picks after him in NFBC 12-team drafts. Food for thought.

If craving power, Joey Gallo ’s price increased, however, perhaps not enough. In the second half, Gallo hit .239/.340/.592 with 18 home runs in only 184 at-bats (one every 10.2) with a 52-percent hard hit rate and 28.8 home run per fly ball percentage. Suddenly, Gallo seems more appealing. If he hits anywhere near .220 with a run towards 50 home runs, getting a player or two to cushion his average make perfect sense. In fact, he could be a bargain.

Rounding out the data, Miguel Cabrera hitting well so far in spring merges with his ADP going up. If he’s healthy all season, Cabrera could be a steal. Just heed his injury history and buffer the roster with a fallback option. There’s no way to predict the Mets, but Pete Alonso continues to mash this spring and if his defense becomes passable, he could hit .260 with 25-plus home runs. Or, he could end up in Triple-A, feeling lucky? 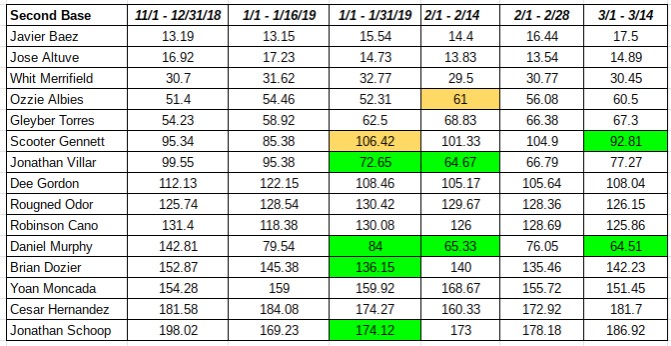 Another position with ADP settling in. The window to get Daniel Murphy at a discount closed rapidly. He’s going in the fifth round in most 12-team drafts but makes for a perfect complement to Joey Gallo owners. Murphy will benefit from the BABIP on fly balls in Coors Field this year, plus adds first base eligibility for a sweetener.

Two boring veterans could be enticing beyond the 10th round in Rougned Odor and Robinson Canó . Analysts spend much of the off-season trying to find the next big thing in rookies or second year players. However, ignoring a post-hype player like Odor would be a mistake. He’s appeared in 444 games over the last three years with 246 runs, 82 home runs, 228 RBI, 42 stolen bases and a .242/.288/.443 slash line. Odor owns a .201 isolated power with a 5.1 walk percentage and 23.2 strikeout rate. It’s an imperfect profile, but in a terrific situation to succeed.

An injured oblique suffered by Vlad Guerrero Jr. seemed to adjust his market price more accordingly. Guerrero will mash when he’s in the majors but expecting him to outperform Anthony Rendón did not feel right. Rendon surged in the second half reaching safely in 33 consecutive games between August 21st-to-September 25th hitting .369/.454/.662 during it. Over his last 25 games, Rendon scored 22 runs with 12 doubles, six home runs, 26 RBI, 11 walks, going 37-for-99 (.374) with a .697 slugging percentage. He could reach 30 home runs and bat third or fourth for the Nationals.

Travis Shaw also proves to be intriguing. He added second base eligibility to his appeal. Last year, Shaw increased his walk percentage to 13.3 percent, reduced his ground ball rate by five percent for almost a seven percent increase in fly balls and upped his isolated power to .257 in the second half fueled by a 44.8 hard hit rate. Another 30-plus home run season lies in the offing, with health.

Teammate Mike Moustakas also offers power upside even with his ADP climbing. Moustakas generated more fly balls last year, 46 percent of the time, with a 43.2 pull percentage and a 36.6 hard hit rate according to Fangraphs over his last 1,128 at-bats. Remember what Miller Park did for Christian Yelich . Yes please. 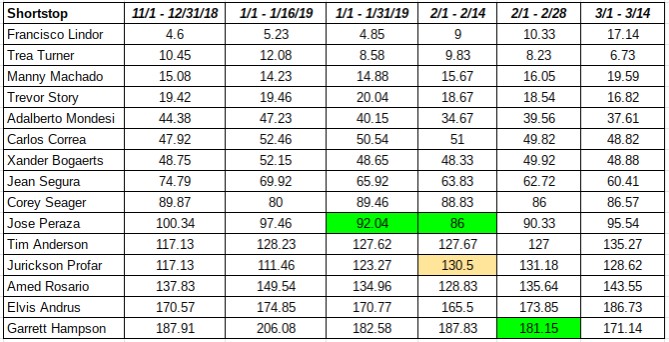 Reports surfaced about Francisco Lindor being ahead of his rehab schedule. He’s appearing in minor league games and from Twitter:

With Lindor’s ADP bottoming out in the middle of the second round, he could be a very intriguing target if his price drops any further. There’s not much drama in the rest of the chart with only Garrett Hampson jumping back up in cost. But, a spring with three home runs, five stolen bases, a .308 average and 1.033 on-base plus slugging percentage over his first 30 plate appearances will do this.

Another intriguing name, appearing just below this list, Paul DeJong . He could hit in the heart of the order and his price will be depressed due to an injury last year. But DeJong could hit 25 or more home runs with 80-plus RBI for pennies on the dollar in drafts. 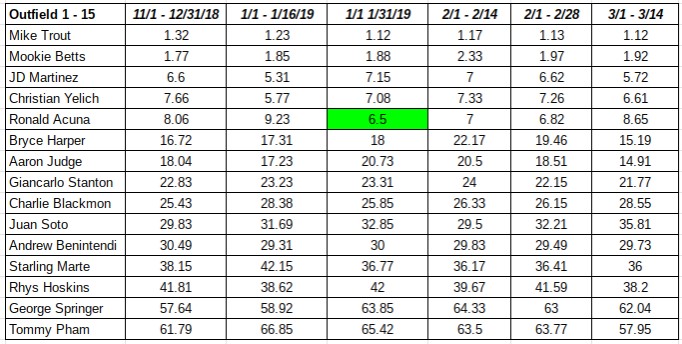 At the onset of drafts in November, outfield felt a bit shallow. As the season nears, it’s lengthening again with spring performances and playing time issues starting to sort themselves out. But, getting a solid foundation at the position then building around it makes total sense. For example, an outfield with Aaron Judge and Starling Marte provides a blend of power with speed which could propel a team to a title.

If looking for a player to reach a 25-home run and 25 stolen base season for the first time, Andrew Benintendi makes a perfect candidate. Plus, he will be leading off for one of, if not the best, lineup in baseball. Not sure Juan Soto will be able to return value on his present price point, but at his age, he’s a stud. Here’s the next group. 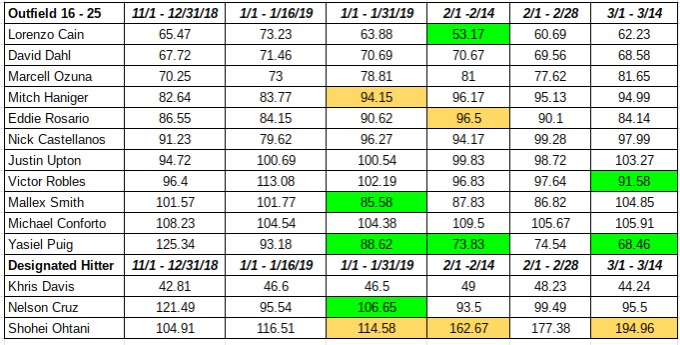 Even with reports of a healthy shoulder, Marcell Ozuna fell in ADP to start the month. The David Dahl helium machine pushes him into the fifth round, so plan accordingly if targeting the talented, yet oft-injured, Colorado outfielder. Victor Robles continues to surge in ADP, he’s raking in spring games but will start the year hitting eighth. He’s a tremendous talent, but in a less than advantageous spot in the lineup. There’s no more Yasiel Puig speculation, fantasy owners love him. He’s halved his original ADP from before Thanksgiving. Puig my friend, will not be cheap, but still worth it if he reaches a 30-home run and 15 stolen base season. Need power, get Michael Conforto . Need speed, take Mallex Smith . Outfield provides a cornucopia of talent, use it to round out a roster.

Injuries continue to ravage pitching as drafts approach. Someone will take Clayton Kershaw based on name value, and at a point, it’s worth it. Just not sure if paying for 170 innings will be wise. Chris Sale continues to throw at a reduced velocity. Discerning if he’s saving bullets for the regular season or hurt will be a risky venture. Can Blake Snell and Aaron Nola come close to replicating their breakouts? So many questions in this group. By the way, take all the Trevor Bauer shares.

In this next group, a tier set by the start of drafts not reflecting the current climate, both Madison Bumgarner and Mike Foltynewicz represent the veteran with risk along with an injury concern of the group. This allows for José Berrios and Zack Wheeler to surge in price points. Berrios owns an ADP of 67.38 with a range of 42-to-93 in March. He owns strikeout upside on a sneaky good team. Wheeler will be taken at pick 86.61 on average with a range of 62-to-110. In the second half last year, Wheeler accrued 75 innings with a 1.68 ERA, 3.47 xFIP, 73 strikeouts against 15 walks and a 0.81 WHIP. Also of interest in this range, Jack Flaherty , Noah Syndergaard and Mike Clevinger . 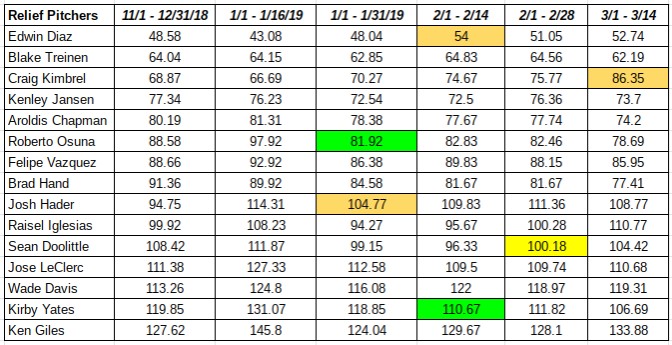 So, playing pin the tail on the closer will be very difficult this year. In fact, it’s pushing up the price on “safe” situations, as if they ever exist in fantasy. Recency bias propels both Edwin Díaz and Blake Treinen atop ADP based on last year. Will not pay for the repeats in spite of touting both of them last year. Craig Kimbrel ’s yet to sign and could sit out until June when his draft pick penalty lapses, hard pass.

When trying to get saves, let the market come to you in drafts. For instance, get Felipe Vázquez after the top five-to-seven fly off the board in a closer run. Then, sprinkle in a Kirby Yates or Jose Leclerc to accompany him after pick 100. Last, when searching for some upside, Corey Knebel or Jose Alvarado fit the bill. Why? Here’s a list of relievers who produced numbers in line with the Josh Hader breakout in the second half of 2017: 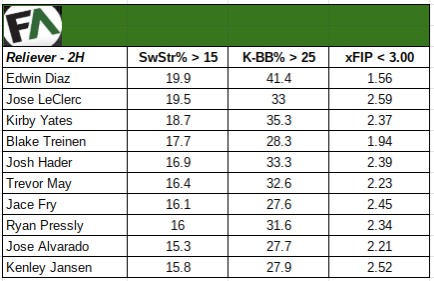 There’s zero guarantee all of the players will be taken around their ADP’s listed in the charts. See how the positions fall off at the tiers, adjust to the room and dominate on draft day. Knowledge yields power, so understanding when players will be taken can help one to adjust on the fly. Best of luck this weekend if drafting!