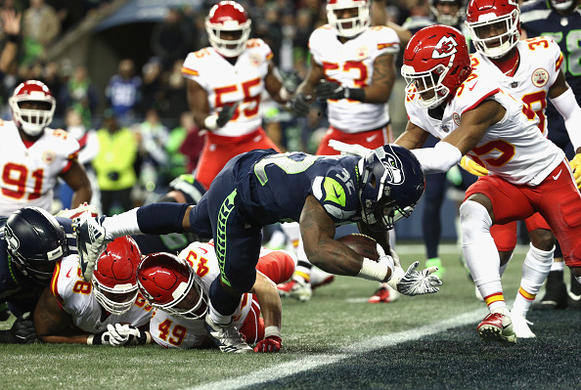 Celebrating the life of Lawr Michaels and fantasy titles won that he would have loved highlights from this week’s Football Week That Was.

I have so much to say about fantasy pioneer and my friend Lawr Michaels.  I cannot file this column without providing some of those thoughts and some of the accolades he so richly deserves.  However, the Lawr Michaels I knew and deeply admired would have insisted that the fantasy analysis come first, so that is the order of this week’s column:

Some Good Week 16 Advice:  Last week, heading into fantasy championship games and a big DFS week, we told you the following:

“Chris Carson will get a ton of run in a game they need to win.  I am buying and you should too.” Well, that worked out as Beast Mode II carried the ball 27 times for 116 yards and 2 TD.  It remains to be seen whether Seattle will go all out to try and maintain the 5 seed in the NFC so be careful penciling in Carson to any week 17 season long championship game or DFS lineup. 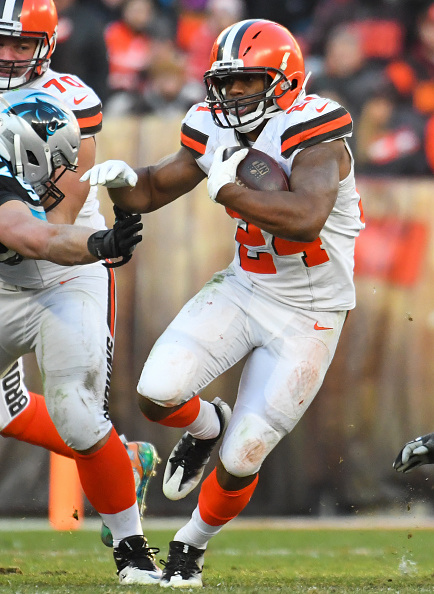 “With the weak Bengals next on the schedule and a ton to still play for, you can bet Nick Chubb will see a lot of touches.  I do not own many shares, but DFS lineups, here we come!” We thought Chubb would do even more but 21 touches – 19 carries for 112 yards plus 2 grabs for 3 yards – is still a pretty good day.  Given that the Browns are playing only for pride in week 17, be very careful using Chubb next week. Of course, keeper league owners, enjoy the gem you have for 2019!

“With a date against a Green Bay team that was eliminated and has nothing for which to play, I like Robby Anderson ’s chances of scoring for a third straight week.  (Note, the next closest Jet in targets was just 4. Clearly, Darnold has eyes for Anderson).” Bingo. Anderson reeled in 9 catches for 140 yards and a TD on 13 targets.  Given the Jets had nothing but Sam Darnold 's development and pride on the line in week 16 and went all out, there is little reason to think they will treat week 17 any differently.

“There is no way I am paying the price [for Rob Gronkowski ] in DFS [in week 16].  With just 3 TD and only 2 games over 6 receptions, I am not paying the freight. Not gonna do it.”  A good call for sure but who would have thought Gronk would lay a complete goose egg? Those in week 17 contests, DFS and even playoff fantasy football need to be very cautious.  Very!

For those playing in week 17 – title games or DFS – try and load up as much as you can on players whose teams are playing for something.  Failing that, grab players on teams who showed their hands by playing their young studs in meaningless games in week 16. They are more likely to stay the course in week 17.

Celebrating the Life of Lawr Michaels:

As you all probably know by now, fantasy sports icon Lawr Michaels passed away this week.  So much has been written (and rightfully so) but I could not file a weekly column without adding my thoughts and tributes to one so deserving.  As a fantasy baseball player, Lawr was special. Precious few people in the world could enter an expert competition like Tout Wars or LABR without a detailed plan, stay relaxed through a grueling 4-5 hour auction, constantly evaluate and then execute brilliantly.  I could not. Lawr could, did, and did so often. As a baseball writer, he was must read for novices and experts alike. I have been reading his stuff since the John Benson annual. As the years passed, I never failed to read his columns. Never.

As good as he was as a baseball writer and mind, Lawr was a far better person.  Let’s face it, those who have ever met either one of us quickly figure out that other than our love of baseball and fantasy sports competitions, Lawr and I had very little in common.  Lawr was the quintessential California Bay Area guy with long hair, jeans and red high top sneakers who enjoyed some recreational habits (shall we say) and played in a rock band. I spent a decade as a federal prosecutor, own a bunch of pinstriped suits, have no musical talent (unless tone deafness is a talent) and have never partaken in those recreational habits.  However, from the day I met Lawr, he made me feel like we were best friends. Indeed, one of the very first times I met him, he insisted that next time I am in California, I stay at his home so that he could show me around, take me to an A’s game, and introduce me to folks in the press box. That was Lawr. Generous and open to friends new and old.

Unfortunately, in the years that followed that gracious invitation, I never did take him up on it.  However, we did get to spend some great times together. At least three to four times a year (typically the FSTA conferences, LABR in Arizona and Tout Wars in New York), I would get to spend time with Lawr.  Each time the greeting would be the same. Me: “Lawr, great to see you.” Lawr: “Oh no you don’t, come here” and he would proceed to give me the most genuine, heartfelt bear hug with a strength that defied his physical challenges and thin build.  Then after each and every one of those industry events, I would read Lawr’s columns, hear him interviewed on air and/or read his social media posts in which he gushed about the most recent industry event at which he got to spend time with his “buds.”  Who would have ever thought that this pretty buttoned up lawyer would be so thrilled to be one of Lawr Michael’s “buds”? But I was, I am and always will be.

There are so many stories – funny, poignant, serious, etc. -- and I am sure I will get to tell more as the fantasy industry celebrates the life of Lawr Michaels.  I look forward to that opportunity to celebrate and honor one so deserving. For now, I will close with the same West Wing paraphrase I tweeted out upon learning the devastating news that Lawr Michaels had passed away:

This week, the fantasy sports industry lost a giant and I lost a friend.  Rest in peace my friend. 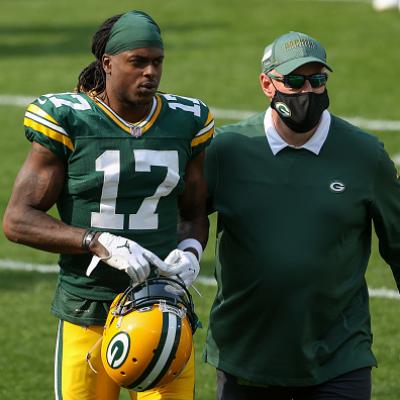 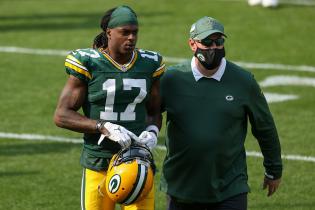 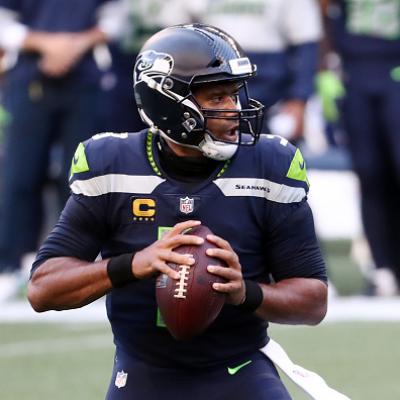 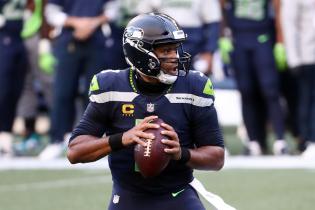 NFL Broncos bringing in Bortles for a visit Tuesday

B. Scherff - OG
WAS
Washington placed RG Brandon Scherff (sprained MCL) on injured reserve.
Scherff is expected to miss 3-5 weeks after having his leg rolled up on by a defensive player against the Cardinals. He'll be replaced by veteran Wes Schweitzer in the interim. Scherff, guaranteed $15 million before becoming an unrestricted free agent this offseason, is eligible to return in Week 6.
Added 10:09 am (EST)
Added 10:09 am (EST)

B. Bortles - QB
DEN
Broncos signed QB Blake Bortles to a one-year contract.
Broncos brought Bortles in for a visit last year but will make his signing official this time given the extended absence of Drew Lock (shoulder). Jeff Driskel is expected to start Week 3 against the Bucs, but Bortles provides a backup option since the team only kept two quarterbacks coming into the year. Bortles also offers veteran experience with 76 career starts compared to Driskel's 13.
Added 9:09 am (EST)
Added 9:09 am (EST)

B. Bortles - QB
DEN
Free agent QB Blake Bortles will visit the Broncos on Tuesday.
It's the first we've heard from Bortles since the Rams released him prior to the season. Jeff Driskel is expected to start Week 3 against the Bucs, but Bortles would provide a contingency plan since the team has no backup option at that position. Bortles also offers experience with 76 career starts compared to Driskel's 13. Drew Lock (shoulder) is still expected to return before Denver's Week 8 bye.
Added 8:26 am (EST)
Added 8:26 am (EST)

M. Brown - RB
LA1
ESPN's Adam Schefter reports Rams RB Malcolm Brown (finger) is expected to play in Week 3 against the Bills.
Brown fractured his left pinky against the Eagles and underwent surgery on Monday to repair it. Even so, he's expected to suit up while teammate Cam Akers (rib) remains day to day. Darrell Henderson will likely be the only back fully healthy for the Rams in Week 3, making him a terrific one-week filler for those who lost players due to injury. Brown qualifies as a FLEX option since he could be limited.
Added 8:17 am (EST)
Added 8:17 am (EST)

C. Akers - RB
LA1
Cam Akers has been diagnosed with "separated cartilage in his ribs" and is day to day.
The Rams have yet to rule Akers out for Sunday's game against the Bills, though it will likely be an uphill battle. With Malcolm Brown also nursing a finger injury, Darrell Henderson could be in position to build on his 14-touch, 121-yard performance in Philadelphia. There is still a long way to go this week, however. We will receive an update no later than Wednesday, when the Rams issue their first Week 3 injury report.
Added 12:36 am (EST)
Added 12:36 am (EST)

J. Cook - TE
NO1
Jared Cook caught 2-of-5 targets for 13 yards and one touchdown in the Saints' Week 2 loss to the Raiders.
Cook was tied for third on the team in targets with three, but his 13 receiving yards were dead last among nine Saints to catch at least one pass. However, Cook caught Drew Brees' lone touchdown of the night, scoring from six yards out in the second quarter. Cook has seen 12 targets through two weeks and will be a back-end TE1 next week at the Packers.
Added 12:23 am (EST)
Added 12:23 am (EST)

B. Edwards - WR
LV1
Bryan Edwards caught both of his targets for 42 yards in the Raiders' Week 2 win over the Saints.
Through two weeks, Edwards has seen three targets. He's well off the fantasy radar despite playing heavy snaps.
Added 12:21 am (EST)
Added 12:21 am (EST)