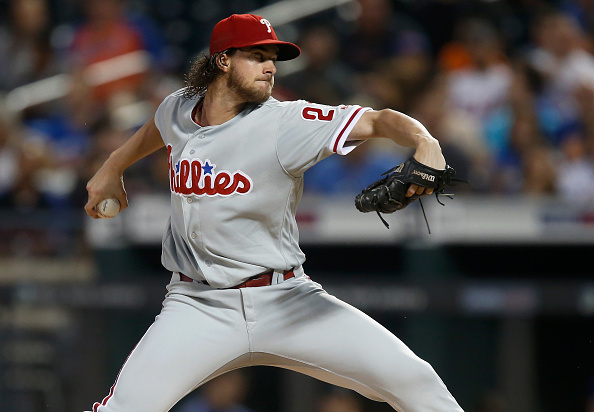 As we head into the final weeks of the fantasy baseball season, hopefully you are competing for the title to your league. If so, then you have probably relied upon one or more of the Starting Pitchers featured in the top tier to achieve your success, and been wise enough to avoid having to use the likes of those in the bottom group. In your effort to be crowned champion, it is suggested you choose wisely how to set up your rotation, and certainly some of the eight starting pitchers in the middle tier could help push you over the top as the season winds down.

This baker’s dozen of SP's are the ones to wind up and let go this coming week. Certainly not all of them have superb matchups, but as noted above, by utilizing the services of these hurlers this season you have had more success than failure. Now is no time to doubt these aces, and if you had the foresight to draft them or trade for them this season, now is the time to enjoy the fruits of your preparation.

Miley gets Cincy at home to open up Week 24, which is certainly a tasty matchup, but even heading to PNC Park to wind up the week is not a daunting task for the Brewers southpaw who has pitched superbly on the road in 2018. The big drawback in using him is the subpar K-rate, as he sports just a 5.9 K/9 over his limited 68.2 innings pitched (IP). He generates a ton of groundballs (2.33 GB/FB ratio through 13 starts) which aids him in keeping the ball in the park effectively (0.39 HR/9).

Keller has twirled three consecutive quality starts (QS) and has four QS in his last six trips to the mound. The 23-year old rookie right-hander needs to work on his control (3.3 BB/9 through 127.1 IP) given his low K-rate (6.1 K/9 over 39 appearances, 18 of those as a starting pitcher), but as with the second best middle-tier SP, he gets opposing hitters to drive the ball into the ground efficiently (2.51 GB/FB rate). He is on the road, but his home/road splits are about even, and both venues fall into the pitcher-friendly category of MLB stadiums.

LeBlanc has been a good option as a SP3/4 this season, posting useful ratio stats: 3.56 ERA, 1.15 WHIP through 146.2 IP. Just as the two SPs profiled above, he is not a strikeout artist, with a below-average 7.0 K/9 rate in 29 2018 appearances (24 starts). He came within three outs of tossing his fourth consecutive QS in his last outing, where he took a loss at home against the Padres despite holding them to just two earned runs through five innings. He is on the road for both his Week 24 trips to toe the rubber, and taking on Houston is not a favorable matchup, but the second start against the host Rangers looks better for fantasy value.

Musgrove has two home starts this coming scoring period, but he is pretty even up at PNC Park or on the road in 2018, so that is no reason to favor him especially this week. He has been inconsistent over the past month, so there is no basis to rely upon him especially, although he does supply a decent number of K's (7.9 K/9 through 109.1 IP) and has good control (1.19 BB/9), so the first start of the week against the cellar-dwelling Royals has some attractiveness if you are searching for a streaming option.

Pena has a pair of road visits to the bump coming up in Week 24, and is working on a two-game win streak, with four consecutive QS on the sheet to boot. He is a good source for whiffs, providing his fantasy owners with an attractive 8.4 K/9 rate over his 81.2 IP this season. Both his matchups are less than ideal, having to take on the two teams vying for the lead in his team’s division. He is in the midst of an audition for a role in the starting rotation next season, so expect him to put forth his best efforts, which to be fair have been better than merely acceptable of late.

Sanchez has a pair of home games in store this week, and while he has been slightly better away from SunTrust Park, his splits are not dramatic enough to worry about him pitching on the mound in Atlanta this scoring period. He does feature an appealing 3.01 ERA and 1.12 WHIP through his 119.2 IP, and is racking up the swings and misses at an impressive clip as well (8.9 K/9 through his 22 appearances). Given Philly’s road woes, the second start of the week looks to be the more inviting game to utilize the rejuvenated veteran righthander.

Glasnow bounced back from a disastrous game against the Blue Jays where he was tagged for seven earned runs in less than a full inning by holding the visiting Indians to just two earned runs over seven innings (where he still took the loss, his sixth against one victory on the season). He is striking out opposing hitters at a prodigious rate (11.0 K/9 through 94.1 IP) but hurts himself with his lack of control (4.4 BB/9 in 42 appearances/eight starts). He has been much more hittable on the road, where both his Week 24 starts take place, which lessens his appeal at this point in the fantasy season, although he is a SP to keep on your radar for 2019’s drafts.

Valdez takes the bump in a couple of home games against AL West rivals when he faces the Mariners and then the Angels in Week Twenty-Four. The 24-year old lefty had shown good strikeout tendencies in the minors prior to his promotion to the big leagues, and had also seemingly learned better control last season, but neither the K's nor command of the zone have been features of his admittedly small sample of work in the MLB. It is not likely the Astros will expect him to pitch deep into games as the season winds down, so victories are not likely to be a big part of his appeal in 2018.

The top denizens of this tier could potentially provide some fantasy value if the matchups work out. None of these SP's inspire total confidence, of course, thus their status as a bottom tier two-start pitcher. Odorizzi, for that matter, is coming off an effort where he no-hit the Yankees into the eighth inning this past week, but that does not erase all the poor efforts he has provided this season previously. Sampson and Mitchell are trying to make cases that they be added to their respective rotations going forward, but the track records do not necessarily inspire tremendous confidence. You will be safer to just avoid any of these 15 SPs to wind up your season.