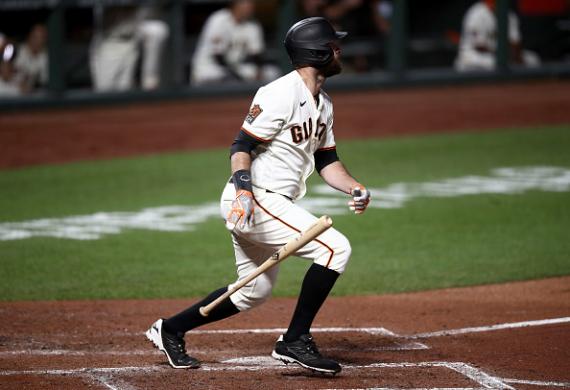 So you’ve made it to your league’s championship! Congrats! I truly apologize for not getting this article up on Saturday. I had it written and got bogged down with other things on Saturday, it just slipped my mind so I do apologize. But we’re here for Sunday waivers and we have some great options to assist you in getting a championship! Like I said this was written early on Saturday, but I’ve updated the write-up’s to include mentions of performances from Saturday’s slate of games. It wasn’t easy in a two-month sprint like this! In a normal fantasy baseball season, when it comes to the championship week, the waiver wire column is mostly filled with starting pitchers to stream. And that trend will continue a little bit, but given the nature of this silly season (a NASCAR term), we’ll still throw some hitters into the mix as well. Also be sure to check out Ivar Anderson’s Two-Start Pitchers/Pitching Streamers article. You may find some similar names from this article in there, but if looking for an edge this week, finding a couple extra starts could win you a championship. Best of luck!

Jared Walsh (LAA – 1B) Walsh made last Wednesday’s waiver column and he kicks off the second-to-last version of 2020. The power hasn’t necessarily stopped but he hasn’t gone yabbo in the last three games (no biggie). It’s nothing to be concerned about as he still has seven dingers since September 4th. He’s hit safely in 11 straight games and 14 of his last 15. He’s still available in about 50% of leagues, but you have to imagine that most of those teams are in the finals. If he is still floating around on Waivers he’s definitely worth grabbing.

Ryan Braun (MIL – OF) Hopefully at this point you aren’t still making adjustments to your outfield, but maybe you want to add a streaking hitter as a utility option. Braun fits the bill! He’s hit a home run in three of his last four with eight RBI in that span. Entering Saturday he was slashing .400/.448/.960 and the power numbers easily went up after Saturday’s three-run shot. The Brewers have eight games lined up next week and he won’t appear in them all, but even if he finds his way to into the lineup for six of them he can still contribute.

Brady Singer (KC – SP) He’s basically just a two-pitch pitcher at this point, but since he basically stopped using his changeup he’s been incredibly effective. Over his last two starts against the Tigers and Indians he has 16 strikeouts over 14 innings and he’s allowed a total of three walks and three hits in that span. He’s slated for two starts this week (both at home) against St. Louis and the Tigers, who he just dominated. He’s one of the best adds for the final week of the season.

Bobby Dalbec (BOS – 1B) I’d much rather prefer picking up Walsh or Braun if they’re available. Braun might only play six games, but that’s more than what Dalbec probably gets considering the Red Sox have just six games in the upcoming week. Dalbec has cooled off considerably after I wrote him up following home runs in five straight games. Boston hasn’t enjoyed this season and they certainly haven’t enjoyed this weekend series against the Yankees. He’s 3-for-19 in his last five games but there are some interesting games coming up against the Orioles and Braves where the pitching could be a bit suspect.

Brandon Belt (SF – 1B) If Dalbec is more of an all-or-nothing waiver grab, consider Belt a safer option at home. That may make you squirm considering he has just two hits since September 9th. But the Giants close out their season with eight games at home against the Rockies and Padres. Most of those starts will be against righties. And for Belt, a southpaw, he’s had most of his success against RHP’s. He’s hitting .330 on the year against right-handed pitching, and .400 at home. Belt’s one of my favorite grabs this week, and might be a bit safer than Dalbec as previously mentioned.

Dean Kremer (BAL - SP) Shoutout to Ivar for this one from his Two-Start Pitcher column referenced above. Kremeber is a fine option to stream this week against the Red Sox who have been absolute garbage this year. I’ll also agree with Ivar that Nathan Eovaldi is the preferred streamer in this matchup, but he probably isn’t available in your league. Kremer doesn’t generate a ton of swinging strikes, but he still gets strikeouts, but he is prone to walks as well, which is gross but he’s shown to consistently allow about three per start. That’s not a good kind of consistency though.

Jose Urquidy (HOU – SP) He doesn’t get two starts next week, but he is definitely worth adding for Sunday’s start against Arizona. He’s only made three starts this season, and they’ve all come this month, but better late than never. The Astros may find themselves leaning on him more or feel comfortable letting him pitch deeper into games after Justin Verlander announced he needs Tommy John on Saturday. He only had three strikeouts in his first 9.2 innings of work, but he notched seven in his last start; a winning effort over the Rangers. And who does he toe the rubber against on Friday? Ding Ding, the Rangers.

Chris Taylor (LAD – 2B, SS, OF) Taylor doesn’t settle into one specific position, but the Dodgers do everything they can to fit him into their lineup. He has two hits in each of his last two games against the Rockies including a home run on Saturday, and what’s even more notable is that the Dodgers have hit Taylor third and fifth in the batting order the last two games. Is that a sign of things to come in the final week? Maybe, but take it with a grain of salt. His ownership has spiked in ESPN leagues, but he could still be out there for you to grab. He provides great position flexibility, but if he manages to hit in better spots in the Los Angeles lineup for the final week, then he’ll carry even more value.

Jurickson Profar (SD – 2B, OF) Profar reminds me of Taylor in a way, but with less position flexibility and he seems buried in the bottom of the lineup. However, he has 24 hits in his last 18 games with eight multi-hit performances in that span as well. He’s flashed a little power, but with an OPS over 1.000 since August 30th he’s worth grabbing. Remember even if he’s at the bottom of the order and he’s getting on base, the top of the order will drive him in. They only have six games on tap this week, that’s the bummer with this suggestion. I wouldn’t suggest him if setting weekly rosters. I’d prefer Braun in that regard, but Profar is a fine add if you set rosters daily.

Caleb Smith (ARI – SP) This recommendation comes with caution so I’m going to briefly name a couple more streamers at the bottom of this piece. Smith was mentioned not too long ago and he gets a pair of starts this week (both at home against Texas and Colorado). The D-Backs have been very careful with him. In his last two starts he’s faced a total of 23 batters and hasn’t pitched more than three innings in either start. Arizona also gave up on the season when they traded Starling Marte so there’s no real reason to push Smith here. However, the two starts are interesting even if he reaches maybe the fifth inning. There have been some rumblings they’d like to get him to pitch about 75-80 pitches, but even then that’s not a guarantee. I loved getting exposure to Smith back when he was with Miami. His spin rate is top notch when he’s at his best. But he does present some risk.

Other Streaming Options: Drew Smyly gets a pair of home starts this week (against Colorado and San Diego) and he’s striking out a ton of hitters. The downside? He doesn’t pitch long enough to be eligible for a win or a quality start. He has 23 strikeouts in his last three starts (11.2 innings) so he can definitely help out in K/9. I didn’t love what I saw from Hamels last Wednesday but he gets two starts against Miami and Boston this week. Kris Bubic against Detroit is a streaming start I can get behind on Thursday. Ivar mentioned John Means as a play late next weekend against Toronto on the road. It’s not sexy by any means (pun intended), but he’s been a better pitcher on the road.

Best of luck this week! I’ll be back on Wednesday with the final fantasy baseball waiver column to help finish your season strong!

A. Almonte - CF
SD
Braves signed OF Abraham Almonte to a one-year contract.
While it is a major league contract, the Braves say it's non-guaranteed. Almonte, 31, has posted just a .668 OPS over parts of eight major league seasons. He is a switch-hitter who can handle all three outfield spots, though, so that's something.
Added 3:29 pm (EST)
Added 3:29 pm (EST)

S. Fuentes - SP
WSH
Nationals purchased the contract of RHP Steven Fuentes from the minor leagues.
Fuentes is now on the team's 40-man roster. The 23-year-old reliever is ranked by MLB.com as the team's No. 26 prospect and would seem to have a good shot to debut in 2021.
Added 3:25 pm (EST)
Added 3:25 pm (EST)

I. Gibaut - RP
TEX
Twins claimed RHP Ian Gibaut off waivers from the Rangers.
Gibaut posted great numbers in the minors but has struggled during his time in the majors to this point. Still, he's a worthy gamble for the Twins.
Added 3:20 pm (EST)
Added 3:20 pm (EST)

C. Kluber - SP
TEX1
Rangers declined RHP Corey Kluber's $18 million option for 2021.
The two sides had been discussing a revised contract for 2021 but apparently weren't able to come to an agreement. It's not clear whether those talks might continue or Kluber and the Rangers will move on. The veteran right-hander made just one start for Texas in 2020, suffering a right shoulder injury that knocked him out for the season. Kluber will turn 35 next April and might have to settle for an incentive-laden, one-year contract this winter.
Added 3:14 pm (EST)
Added 3:14 pm (EST)