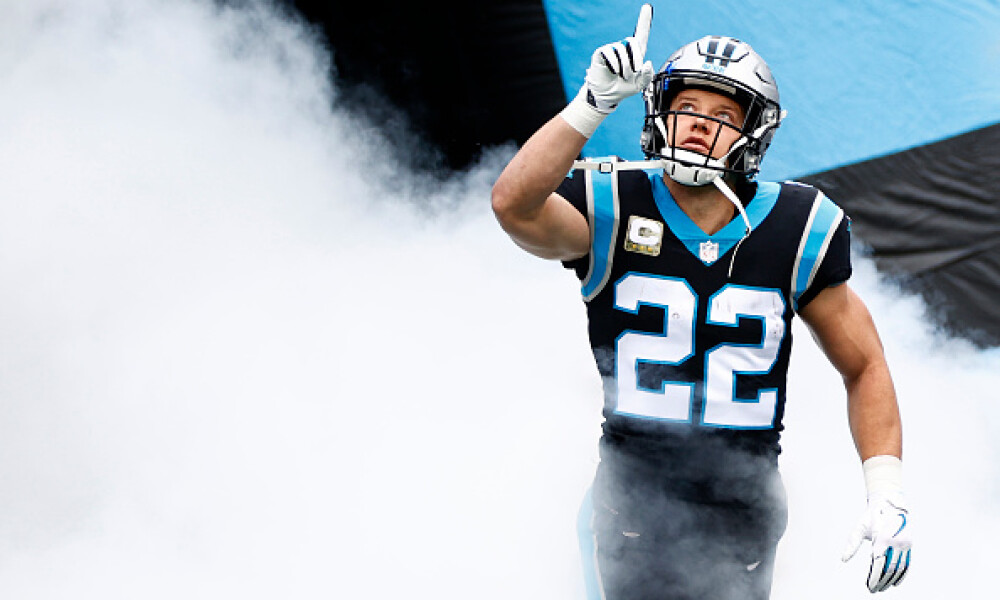 One of the most important decisions in any fantasy football draft will be “who do I select in the first round?” It’s the tone-setter for your fantasy football team, so you want to ensure you get the pick right and feel good about it. If you’re lucky enough to get the first overall pick, you’ll have your pick of any fantasy player your heart desires. At the top of the fantasy football rankings season after season, it’s typically the all-important running back position buoying them, with last year’s RB1 Jonathan Taylor leading the charge as the consensus RB1 and 1.01 overall in 2022 fantasy football drafts.

What if I told you there’s a much more productive running back who scores many more points than Taylor could dream of and has done it season over season since 2018? Of course, you’re talking about Christian McCaffrey — who is MY 1.01 and should be YOUR top selection if you get the first overall pick in your fantasy draft.

The Elephant in the Room: Christian McCaffrey's Injury History

In a story as old as time when anybody utters the word “McCaffrey”, people flock to the injury label.

“But McCaffrey has only played ten games in the past two seasons, Kevin!”

“I want safety with my top-overall pick!”

I hate to be the bearer of bad news here, but I need to unveil a harsh truth to you, the consumer:

At least not with the running back position. 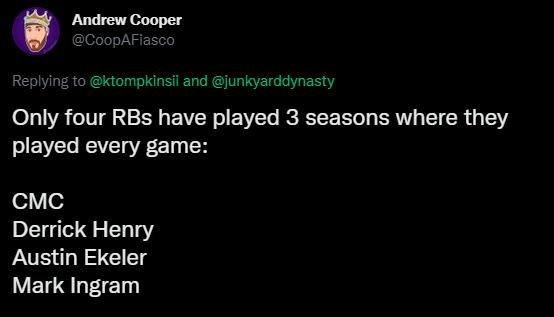 The above tweet obviously eliminates a large section of the running back pool who have not played at least three seasons, but the running back position and the word “safety” might as well be oil and water. They don’t mix and don’t play well with each other.

Want more proof? RotoViz’s Josh Hermsmeyer did some injury-specific research regarding running backs. In a seven-year study of running backs selected in the first five rounds of fantasy football drafts, running backs are 200%-360% more likely to suffer a serious injury (injured for four or more weeks) than wide receivers are.

By their very nature, the running back position is not only heavily volatile due to workload received compared to years past, but in injury rates too.

Add in the fact that more and more running backs are in specialized roles and the “bellcow” running back is a thing of the past, and we’re living in a world where those mid-2000’s running back careers like LaDainian Tomlinson, Shaun Alexander, and Priest Holmes would be tall tales in a children’s book. They are essentially unicorns in today’s NFL. Jonathan Taylor, the fantastic Colts running back who was the RB1 for fantasy in 2021, played all 16 games last season. As did 2021 RB3 Najee Harris. In fact, only 12 of the 2021’s top-70 running backs in PPR played all 17 games.

Suppose we want to dive into this even further about McCaffrey’s specific injuries. In that case, there’s very little correlation between his list of injuries and connectivity to one another to create a narrative of being “injury-prone.”

None of McCaffrey’s injuries have required surgery to fix and none of been recurring injuries or connected injuries where one could make the case of favoring a part of the body to compensate. One could interpret these injuries as “fluky” in nature.

But is McCaffrey Still Good?

Simply put: when McCaffrey is on the field, he’s scoring fantasy points. A ton of them.

McCaffrey earned over 100 targets in each of his first two seasons leading up to his penultimate season in 2019 where he put together a 1,000/1,000 season, 142 targets, 116 receptions, and almost 1,400 yards on the ground. When you look at the running back position, the ability to earn targets and catch passes is what we’re looking for to boost the fantasy upside. It directly correlates to the ability to earn high-value touch opportunities in addition to goal-line work.

The fact that McCaffrey led the Panthers in high-value touches (rushes inside the 10-yard line plus receptions) with a 21.5% total team share while only playing in five complete games and parts of two games speaks volumes to how involved and vital McCaffrey is to the success of the Panthers’ offense. Not only that but how reliant the team is on McCaffrey in how he generates offense on the ground and through the air.

In addition to high-value touches, put this statistic into perspective:

Taylor led the NFL in green-zone touches by a considerable margin and led all running backs in touchdowns, rushing yards, rush attempts, and most other rushing categories. Still, Taylor only earned 51 targets (catching 40) and was sporadically involved as he ran routes on over 50% of Carson Wentz’s dropbacks in 2021.

Despite the fantasy success Taylor had in 2021, his RB1 season where he averaged 22 FPPG was the lowest overall-RB1 season since 2015 (Devonta Freeman - 21.1 FPPG).

To give you some context with Taylor and how his RB1 season ranks in terms of FPPG over the last six seasons:

To compare with each of McCaffrey’s seasons as Carolina’s starting running back:

While new Colts quarterback Matt Ryan has always been friendly to targeting the running back (8.6 targets per game in 2021 to the position), expecting a significant uptick to Taylor’s three targets per game last season is a bit foolish in an offensive that was the fifth-most run-heavy offense in the league. Make no mistake — Taylor will be an excellent running back in fantasy football this season if healthy, but he does not come close to McCaffrey’s upside.

Even if the Panthers limit the snap share of McCaffrey in 2022 (and they did in 2021, limiting him to 79% of the snaps in five games he completed), he will still be a substantial driving force in this offense just based on the volume of touches he’ll receive. McCaffrey won’t get the 93% total snap share he received in 2019 or the 91.3% snap share in 2018, but does it matter? He still produced despite a decreased workload.

In those same five games (Weeks 1, 2, 9, 10, and 11) that he completed in 2021, McCaffrey still earned 7.6 targets and totaled 16.4 rushing attempts per game en route to his 23.6 FPPG. Keep in mind that was with him only scoring TWO total touchdowns. Imagine if the offense becomes more competent and McCaffrey plays the majority of 2022? We’re back to a 25-26 FPPG player and THE elite player in fantasy football once again.

When it comes to the one thing we’re looking for in fantasy football — scoring fantasy points and scoring a lot of them — I just can’t see selecting a running back like Taylor with a player that features so much upside like McCaffrey still on the board. McCaffrey is the most unique player in all of fantasy football. Nobody combines his ability to run routes, separate, and break away from defenders. It all comes down to health, and I’m confident that even in the bullish scenarios for some of these running backs like D’Andre Swift, Najee Harris, and even Taylor, they won’t touch what McCaffrey regularly provides.

To put it in one sentence from Stealing Bananas' Ben Gretch: “His (McCaffrey's) median is almost everyone else's ceiling.”

The risk for McCaffrey is already baked into the average draft position (ADP) on Underdog Fantasy as his average ADP is 3.1, behind Taylor and Kupp. While we’re all looking for the legendary running back season as stars need to align for some of these running backs being selected in the first round, that legendary season is just a typical season for McCaffrey. THAT is why he is a no-brainer pick for the 1.01 in 2022.