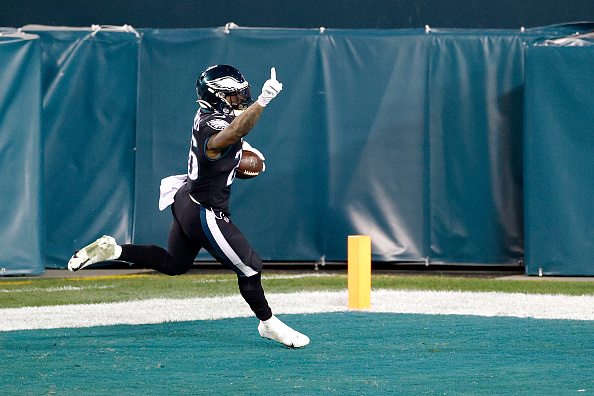 It was a mixed bag of performances in Week 14. There were strong showings from teams in terms of scoring and big wins, however not all of that offense came from inside the 20. There was also more spreading the ball around this past week as opposed to a single focus of the red zone offense for each team, as you’ll see further down the piece. It’s time to focus on guys who are trending upward or are showing consistency over the last few weeks to make the next step in your playoff run with.

Brandon Allen CIN - This is the first time a Cincinnati quarterback has appeared in this piece for a while and certainly since Joe Burrow was injured. Allen had his best red zone day yet with eight attempts, second in the league for the week, with five of those inside the 10 and a touchdown. He didn’t exactly spread the ball out as you’ll see in the receiving section but he did move the ball well against Dallas, though it was still in a losing effort. He draws the Pittsburgh pass defense on Monday Night for Week 15 so it’s a bigger jump in competition than the lowly Cowboys’ unit but we’ve seen Pittsburgh falter of late a little bit.

Kyler Murray ARI - Murray tied a season-high for passing attempts in Week 14 with seven but they only resulted in one touchdown inside the 20. For as good as the Arizona passing game has been this season, he hasn’t quite put up the expected number of red zone attempts with 55 total and that puts him in the middle of the pack but that’s mainly because of his rushing ability in the red zone, especially early in the season. Facing Philadelphia could boost that success rate though as they are allowing nearly 67-percent of trips to turn into touchdowns.

Russell Wilson SEA - Wilson isn’t necessarily here for the volume, he’s here for efficiency. He had six red zone attempts against the Jets in a blowout but four of those turned into touchdowns icing the 37-point win. Only four different receivers saw a red zone target on Sunday but all of them caught their, at least, one target for a touchdown. Seattle has one of the best red zone offenses in the league and is now facing one of the best red zone defenses in Washington for Week 15 while both are fighting for divisional wins and playoff spots.

Cam Newton NE - Newton is here for an interesting fact I discovered this week while writing this piece and his performance last week is the perfect example of this. Newton has just 34 red zone passing attempts on the season, one this past week, but has 39 rushing attempts inside the 20, four this past game, and New England wide receivers have a total of four receiving touchdowns on the year. If Newton qualified as a running back, he’d be in the top-10 for red zone rushing attempts this year. So while his passing has been poor much of the year, he’s still moving the ball enough to get shots at rushing touchdowns and has been cashing in on those too.

Kenyan Drake RB ARI - Drake led the NFL in red zone carries this week with eight of them including four inside the 10. He turned one into a score in the Cardinals road win. The good showing on the day now ranks him second in the NFL behind only Dalvin Cook (by one carry) in total red zone carries on the year and puts him one ahead of Derrick Henry . While the volume of touchdowns wasn’t there early for him because Kyler Murray was rushing for scores and Chase Edmonds got the receiving work, the volume of work Drake is getting keeps giving him all the chances he needs to punch them in for scores. With the Eagles coming to town who allow nearly 128 yards a game rushing and more importantly are allowing two-thirds of their opponents’ trips to the red zone to be touchdowns, Drake could be in for another good day inside the 20.

Miles Sanders RB PHI - Sanders is back from the netherregions of fantasy football relevance after a great game in a tough match-up in Week 14. The four red zone carries in Week 14 tie a season-high for him that he set all the way back in Week 2 and equal the amount from Week 10-12. While the offensive line is still not good, the switch to Jalen Hurts at quarterback should help Sanders not face so many stacked boxes with nowhere to run and no gaps to hit. Now they face Arizona in Week 15 who are a mediocre run defense and Philadelphia has the advantage in run blocking according to PFF which could lead to more shots for Sanders inside the 20.

Jonathan Taylor RB IND - Taylor has been very good over the last few weeks and has really produced for fantasy owners but he’d yet to really get the work in the red zone until last week. The four red zone carries in Week 14 are the most he’s had in a game since the five in Week 3 and more than the last three games combined. He turned one of the carries into a score and while the four carries were great, Nyheim Hines still saw three and caught two passes. The Colts face Houston in Week 15 who are terrible against the run and Taylor posted 22.5 fantasy points against the last game out.

Mike Davis RB CAR - Did you realize that there are only three running backs to have at least four red zone carries in each of their team’s last three games? Mike Davis is one of those three along with Kenyan Drake and Nick Chubb . In fact, Davis has had six such games this season which ties him for fourth-most games in the NFL this year and tied with Dalvin Cook . His four carries this week bore results as he posted two red zone touchdowns against Denver and brings his season total for red zone carries to 33, eighth-most in the NFL. Carolina is facing Green Bay in Week 15 and the Packers’ rush defense hasn’t been great all year and with the consistent work he gets inside the 20, it should be another fruitful day in the red zone.

It was mentioned above that this section might look a bit different this week and it’s because there were so many groups of receivers from the same team to have equal days, so we’ll look at those groups together.

Curtis Samuel and Robby Anderson CAR - A perfect example of the passes not being spread out is the Carolina duo. Teddy Bridgewater had seven passing attempts on the day and Samuel and Anderson had three each for more than 80-percent of the total targets. While the targets are nice each receiver only caught one of the balls thrown their way and neither had a touchdown. It’s also notable that D.J. Moore didn’t play and that likely changed the way Bridgewater targeted players. The three targets for Samuel were his first in four games and for Anderson they were his first since Week 9. Both of them lead the Panthers in red zone targets at 10 a piece though five of Anderson’s came in the first four weeks of the season and Samuel has had them in chunks of two and three at a time. They will be in a shootout with Green Bay this week and that might lead to more volume coming their way as the Panthers try and keep pace with the Packers.

A.J. Green and Tyler Boyd CIN - Welcome to the Red Zone Report Mr. Green, it’s been a while. Both Green and Boyd saw three targets each against Dallas and accounted for 75-percent of the targets from Brandon Allen . Green saw two of his three targets inside the five and he caught two of the three including one for a score. The three targets bring him up to eight on the season and were his first since Week 11. Boyd meanwhile, saw two of his three targets inside the 10 and caught two but didn’t have a touchdown. Boyd is up to 15 on the season which leads the Bengals and he’s now seen red zone targets in back-to-back weeks. Both are facing the Steelers’ defense in Week 15 and so the red zone targets might be fewer this week, but odder things have happened.

Keelan Cole and Laviska Shenault JAC - Someone had to get the targets that Mike Glennon was doling out. After all there were nine of them total. Both Cole and Shenault had three targets a piece and on a side note D.J. Chark also saw two. Cole caught one of his targets for a score while Shenault didn’t catch any, unfortunately. Cole is now second on the team in targets and has been consistent with three straight games with at least one target. The only beneficial thing about the match-up with Baltimore is that Baltimore is allowing nearly 66-percent of trips to end in touchdowns so if Jacksonville is able to make it to the 20, they could have a decent showing of things for fantasy owners.

Gabriel Davis and Stefon Diggs BUF - Davis has stepped right in for John Brown and hasn’t skipped a beat with five targets in the last three weeks including two in Week 14 against Pittsburgh. Diggs also saw two targets his way in the win and it makes it the second stretch this season of three-straight games with at least one red zone target. Both Davis and Diggs used the targets to score a touchdown and have given Josh Allen two solid options in the red zone to help increase his passing numbers instead of the rushing touchdowns he was relying on early in the season. While the Broncos have only allowed 16 receiving touchdowns on the year, Allen has done well against top-10 defenses this year and Denver ranks 22nd against slot receivers in DVOA.

DK Metcalf and Freddie Swain SEA - Two of the four receivers that saw targets from Russell Wilson , were Metcalf and Swain and each of them saw two targets a piece. Each one also scored a touchdown in the blowout win as well. Clearly Metcalf has been the top target all year inside the 20 for Wilson but it is interesting to note that since Week 4, Metcalf has had targets in back-to-back weeks and then missed one game and how had targets in Week 14. Swain meanwhile, doubled his season-total for targets with his two against the Jets. The passes thrown his way were his first targets since Week 5. Looking ahead to Week 15, Metcalf could be in line for another good week since Washington ranks dead last in the NFL in DVOA against number-one wideouts.