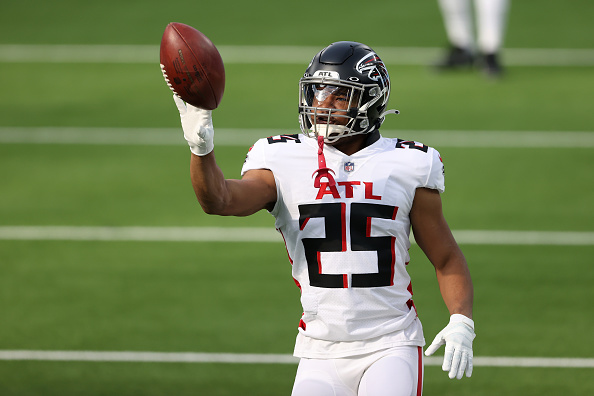 Many of you have found a way to keep your fantasy teams competitive even though some of your rosters have been decimated by injuries. If you selected running backs like Christian McCaffrey , Saquon Barkley , and Ezekiel Elliott in preseason drafts and your fantasy team is still standing in Week 16 you deserve to take a bow. The fact that those marquee players provided so little in overall production is evidence of just how volatile the fantasy RB position can be, and how important it is to load up your fantasy rosters with alternatives at the position.

Those who held on to Elliott’s handcuff all season long were justly rewarded when he scored 31 PPR fantasy points in Week 15. Unfortunately many fantasy managers will be forced to bob and weave and juggle their lineups with several backfields in flux due to potential Week 16 injuries. Running backs like Pollard, Le’Veon Bell and Jeff Wilson Jr. could be the final piece to the puzzle that helps you win your league’s fantasy championship.

Unanticipated injuries and having players unexpectedly placed on the reserve/COVID-19 list are always a possibility these days, and Fantasy Alarm will keep you up to date on all the latest breaking fantasy football related news as it happens. In the meantime, the following analysis provides a closer look at a few of the NFL backfields that deserve your attention.  We hope that it helps you better manage your fantasy football team(s) and wish you luck on your quest for a fantasy football championship!

The Falcons announced what we fantasy players have known for a little while now: Ito Smith is the team’s lead back. Unfortunately when you’re the lead back of a Falcons team that runs a pass first offense you’re not going to get many carries. Over the past three weeks Smith has lead Falcons running backs in snaps played but he’s only averaged just over eight carries per game during that span. With Todd Gurley ’s chronic knee injuries continuously resurfacing and limiting him on the field, his days as a bell cow back are likely behind him. Gurley will be a free agent at the end of the season.

While the Texans’ offensive line was better at protecting their quarterback last season, their run blocking wasn’t very good. Unfortunately the unit as a whole has taken a step backward this season and that has made it extremely difficult for any Texans running back to run the ball. As a team, they have the lowest total rushing yards (1,204) and rushing yards per game (86). It’s not surprising that David Johnson hasn’t had a 100-yard rushing game so far this season. However, Johnson has been a very good pass-catching back throughout his career and the Texans finally took advantage of his receiving skills in Week 15. After logging zero catches in his previous two games, he caught all 11 of his targets against the Colts. Johnson has a good matchup against the Bengals and he should have success on the ground against a team that is giving up 4.89 YPC to RB’s. However, if his offensive line doesn’t create enough holes for him to run through, the Texans know that they can use him in their passing game. If Duke Johnson and C.J. Prosise , who missed Week 15 due to injuries, are forced to miss Week 16 as well, Johnson could be a fantasy football hero this week.

James Robinson possibly being a no-go for Week 16 due to an ankle injury is a big deal for fantasy managers. The rookie running back, who absolutely deserves to have been selected for the Pro Bowl, is fantasy football’s RB4 based on total PPR fantasy points scored. He hasn’t scored less than ten PPR fantasy points in any game this season and he basically carried many fantasy teams on his back as he helped lead them to the fantasy playoffs. If Robinson is out this week Dare Ogunbowale and Devine Ozigbo might find themselves splitting carries. Some actually expected Ozigbo to be the Jaguars’ lead back this season after they released Leonard Fournette . A hamstring injury forced the Jags to place him on the IR and the rest is history.  For Week 16, Ozigbo would probably be better suited to have the Jags’ early down role with Ogunbowale playing during passing downs.

With Clyde Edwards-Helaire out of action due to a high ankle sprain, Le’Veon Bell will have the opportunity to grab the majority of the Chiefs’ early down carries. He's got a sweet matchup against the Falcons but the Chiefs are another team that runs a pass heavy offense. The best scenario for fantasy managers needing to start Bell would be for the Chiefs to get off to a big early first half lead. In that case the Chiefs might look to run the ball more in the second half, giving Bell the opportunity to provide fantasy managers with enough fantasy production to help them seal a Week 16 victory.

With the 49ers placing Raheem Mostert on injured reserve due to a left high ankle sprain, Jeff Wilson Jr. is likely to take over as the lead back in Week 16. After Mostert was forced from Week 15’s contest against the Cowboys in the third quarter Wilson received a majority of the early down carries the rest of the way. Tevin Coleman and Jerick McKinnon are healthy but based on their recent usage, likely won’t have a large role against the Cardinals in Week 16. Look for Coleman to have the change of pace role and McKinnon to be active on passing downs. Wilson has had a nose for the end zone this season and has scored all seven of his touchdowns in games where he’s had at least 12 carries. Look for him to have at least that many carries this week.