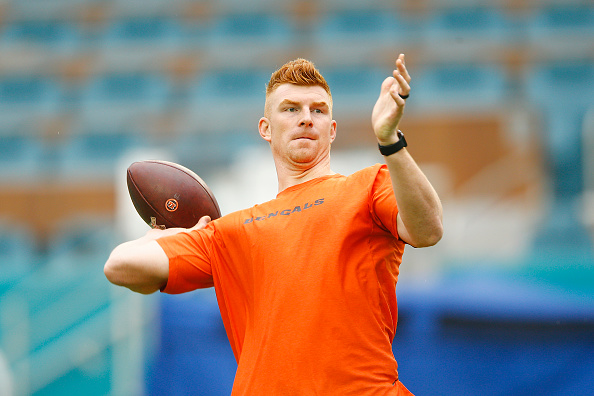 Whether it was due to injury, poor play, or trying to give a young player a chance, almost half the league used a backup quarterback in 2019. One team even had their quarterback retire right before the season started! With the speed of the game, bigger and stronger defenders, and the pressure to have the best players on the field you can bet that you won’t see the starting quarterbacks in Week 1 play each and every week. When playing best ball leagues it can be important to roster a backup quarterback or two since you can’t make roster moves during the season. Obviously, it is important to have enough quarterbacks on your roster to have one active each and every week since it is the position that scores the most points for you. Below are the best quarterbacks that likely won’t be starting Week 1, but could be fantasy relevant at some point during the year.

While Dak Prescott has proven fairly durable, there is still a contract question with him as of now. Could he hold out? That seems a little unlikely, but how have they not gotten a long-term deal yet? Not only that, but Dalton will be the best backup quarterback in the league. He has been a competent starter throughout his career, and if he does have to play for Dallas, he will have amazing weapons to throw to. Dalton would be an immediate add in regular leagues if Prescott was out, and he would be near the top 12-15 fantasy quarterbacks each week with the skill players around him. Having that kind of weapon on your bench of a best ball league could be huge.

Drew Brees did miss a few games last season, and Teddy Bridgewater won those games, but wasn’t overly fantasy relevant. Bridgewater is now in Carolina, and the Saints brought in Winston to be their backup. New Orleans is a high-powered passing offense, and Winston can certainly sling the ball around. He threw for 5,100 yards and 33 touchdowns last season. Of course, he threw 30 interceptions as well, but hey no one is perfect.

He certainly could be starting in Week 1, but at worst he will be breathing down Mitch Trubisky’s throat all season if the young quarterback falters at all. Foles has been a journeyman most of his career, outside of an amazing 2013 and then the Super Bowl run for the Eagles. Foles doesn’t make a ton of mistakes and is careful with the football. He wasn’t great last year in his small sample with the Jaguars, but it is almost a certainty that he is starting for the Bears at some point during the year. He isn’t a game-changer, but Foles could be a guy who could be a steady contributor especially if he can get the ball to Allen Robinson a lot.

Baker Mayfield was bad for a good part of the season last year, however, the Browns didn’t have any other viable option to go to. They rectified this situation in the offseason and brought in Keenum on a three-year contract. He had a great 2017 for the Vikings, and a decent 2018 for the Broncos. The Browns have great weapons with Odell Beckham , Jarvis Landry , and Austin Hooper , and with those kind of weapons, Keenum could certainly be productive. Mayfield hasn’t been forced to miss any time yet, and benching him doesn’t seem overly likely, if he struggles again like he did in 2019 we could see Keenum on the field at some point during the year.

He was forced into starting duty with the retirement of Andrew Luck , Brissett was solid, yet unspectacular. He had 22 total touchdowns in 2019, which isn’t great considering how much of a passing league the NFL is. The Colts did go out and sign Philip Rivers , however he is 38 years old, and could be an injury risk. Indianapolis loaded up on some skill position players in the draft, and the offense should be more dynamic than it was in 2019. If Rivers doesn’t cut his interceptions, there is a possibility we could see Brissett. The Colts did sign Rivers to a pretty lucrative contract, so it would be more likely that injury would force Brissett back into action. While he wasn’t great last season, he was solid, and with a couple of new weapons it is safe to expect a little better production from Brissett if he finds his way under center again.

Everyone will remember that he wasn’t that great last season when Ben Roethlisberger went down, however, it wasn’t all his fault. James Conner and JuJu Smith-Schuster were also injured, and the team just imploded completely in 2019. He did have several multi-touchdown games before that horrific concussion that he suffered last season, so if Big Ben was to go down again, Rudolph could have better statistics. Smith-Schuster should be back healthy, the Steelers drafted a running back and a wide receiver, and brought in Eric Ebron at tight end. Their young receivers matured last season, and Pittsburgh appears to be loaded for 2020. Roethlisberger has missed multiple games in three of the last five seasons, so Rudolph certainly could come into play this season.

He didn’t get on the field last season, but in 2018 Mullens was pretty solid filling in for Jimmy Garoppolo . He threw 13 touchdowns in eight games, and this was a season that everyone on the 49ers roster seemed to be injured. Since then, San Francisco has beefed up their offensive weapons, and if Garoppolo were to go down again, Mullens could be a very interesting player. Kyle Shanahan is great at play design, and Mullens showed that he had the poise and the arm to run the offense. Garoppolo was healthy last season, but two years ago he did tear his ACL so he can’t be called injury prone, but there was one lost season for him already.

OK, this might be just to poke the bear of the angry Packers fans, but something is certainly up in Green Bay. Aaron Rodgers clearly is not on the same page as the front office, and they did nothing to keep him happy or help him with new weapons. It would be hard to see Rodgers benched, but could he possibly be traded? He is 36 years old, so an injury is always a possibility. He did miss half of the year in 2013 and 2017, so when he does go down, it generally is for an extended period. The Packers used a first-round pick on Love and traded up to get him so clearly they see something that they like a lot. As stated earlier, Green Bay doesn’t have a ton of weapons on offense outside of Davante Adams but if Love finds his way on the field he still could be successful and is worth a roster spot on a best ball team.