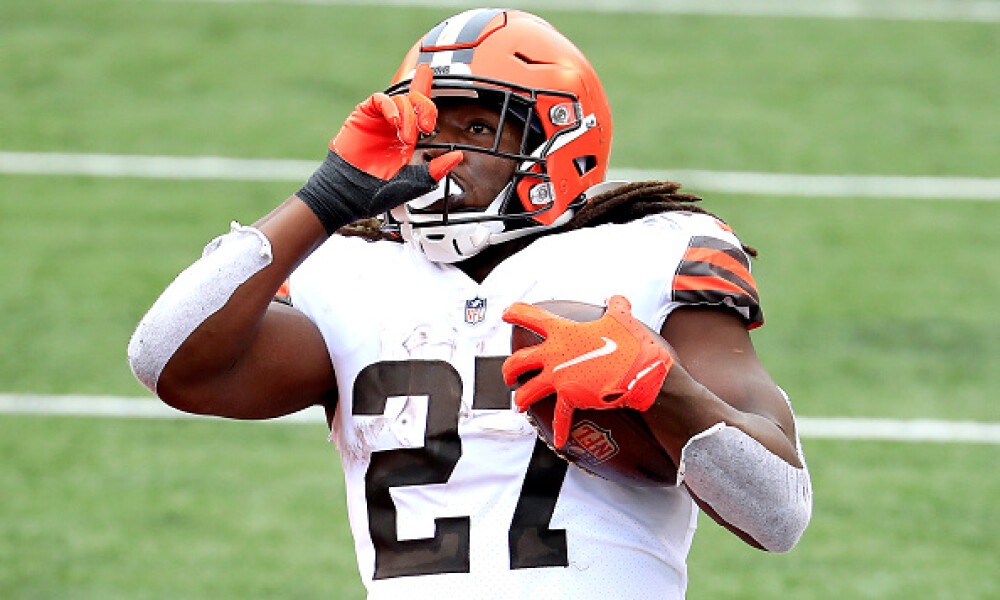 With NFL training camp in full swing, your fantasy football draft prep should be getting a little more serious now. After all, your draft day is almost here. You have probably been sifting through all the draft strategy articles within our free fantasy football draft guide, studied the fantasy football player rankings and have made your own personal adjustments, hopefully, using our all-new dynamic tier ranking system. In all likelihood, you have built a list of draft day targets and some of you have probably even built a fantasy football do not draft list. But before that do-not-draft list grows to much, understand that every player should be draftable at the right price. Sure, there are some who really stand out as someone who don’t like and will never draft, but don’t be too quick to dismiss someone as you never know just how much value you could be leaving on the table. We’ll discus this further as we move through the recent news.

What is NFL training camp without some good old-fashioned drama? The latest saga finds us in Cleveland where Hunt, the Browns No. 2 running back, has decided to skip team drills in camp until he gets a new contract. Hunt is in the last year of a two-year extension he signed back in September of 2020 and is now threatening to sit out until he gets some security. He’s even requested a trade, though the team says that’s not going to happen. Talk about biting the hand that feeds you. The Browns rescued Hunt off the NFL scrap heap after a video was released of an incident where he physically assaulted a woman at a hotel and no other team would touch him. He played eight games in 2019 after serving a suspension and became part of one of the league’s most prolific ground games as he and Nick Chubb proved to be a force in the NFL. The Browns even gave him a two-year extension on top of that. Now, after a year in which Hunt only played eight games due to a litany of injuries, he wants to hold out until he gets another deal?

There is no question that he can be an explosive back in the NFL and would probably be the No. 1 on most other teams, but the situation is what it is and if he wants to a new contract, he’s going to have to earn it. Unfortunately for him, he has little to no leverage here as the team can, very easily, move forward without him as Chubb will have no problem handling the full workload. So now the question is – is there risk in drafting Hunt in fantasy? How long will this hold-out last and, even if he does return to the practice field, are we drafting a guy with a chip on his shoulder or are we drafting a guy who is going to half-ass it so he doesn’t get hurt again? If he were to play and get his usual workload, you can’t pass him up if you need a running back, but keep a watchful eye on the situation because the longer he sist, the more he falls out of favor with his coaches.

If you’re drafting soon, investing in the Rams quarterback could be a very risky proposition. Last week, head coach Sean McVay said that the discomfort in Stafford’s right elbow was “a little bit abnormal for a quarterback,” and there were numerous rumors the team feared a partially-torn UCL which led them to opening a dialogue with the Los Angeles Dodgers organization much in the same way the Dallas Cowboys did when Dak Prescot was having problems. McVay also confirmed a report from Ian Rapoport that Stafford got an injection in his right elbow early in the offseason which is why he wasn’t throwing at OTAs. We do not know if it was a cortisone shot or if it was, in fact, a PRP injection which injects stem-cells into the body hoping to heal the partial tear. What we do know is that Stafford threw the ball at practice over the weekend and McVay apparently breathed a sigh of relief and claimed that he would “sleep better at night having seen him [Stafford] throw on Saturday.” This is definitely a situation to keep monitoring and don’t let the coach-speak fool you. Until we see Stafford throwing consistently at practice, you have to be concerned, not just for him, but for his receivers as well. I’m not saying they belong on a do-not-draft list, but if you are drafting today, you need to be very cognizant of the possibilities. You cannot draft Stafford without adding a legitimate back-up at this time.

Bears QB Justin Fields is Losing All His Targets

Injuries continue to pile up at Bears camp as wide receiver N’Keal Harry suffered an ankle injury that, according to reports, “appears severe.” This is coming on the heels of the news that receiver Byron Pringle is expected to miss time with a quad injury and now the question is, who’s getting the ball in Chicago? The receiving corps behind Darnell Mooney was thin enough as it is, so with Pringle and Harry joining rookie Velus Jones who has missed the past few days with an undisclosed injury, Fields is left throwing the ball to guys like Equanimeous St. Bown and Dazz Newsome at practice. Not that either one of them is any worse than the guys sitting out, but this doesn’t bode well for Fields to build a stronger rapport with his on-field targets. We already know he favors Mooney. And maybe tight end Cole Kmet gets in on the action a little more, but if this receiving corps doesn’t heal up and give some more support to it’s second-year quarterback, this offense is going to be stuck in the mud. It is very easy to get sucked into the whole “he’s a mobile quarterback, therefore his rushing yards will provide the value,” but if he doesn’t have a legitimate set of targets he feels good about throwing to, his development is going to suffer.

Still No Suitors for Odell Beckham

Not that we were expecting anything soon, but a recent report from NFL Insider Ian Rapoport says that no signing of the star wide receiver is imminent while he continues to rehab his way back from a torn ACL suffered during the Super Bowl. Beckham isn’t expected to be ready to return to the field until about halfway through the regular season, so he is certainly being deemed as a low priority for right now. Several teams continue to monitor him, but that’s really about it right now. If you’re drafting in best ball, then a late-round flier on OBJ is fine, but if you are in a re-draft league, you’re not going to want to eat a bench spot for six-to-eight weeks. Some leagues offer a really deep bench or may even allow you to put Beckham in an IR spot, so the idea isn’t completely out of the question, but chances are, if you can’t stash him on injured reserve, you’re not going to want to draft him at all. Leave it for the waiver wire and start your season with the roster flexibility you need at the beginning of the year.

Will Adam Thielen Be a Red Zone Target Monster?

That’s what they’re saying in Minnesota right now and, according to reports, it’s the coaching staff that’s saying it. We all know that new head coach Kevin O’Connell has every intention of turning Justin Jefferson into this year’s Cooper Kupp, but defenses are also very aware of the game plan and will certainly scheme accordingly. That opens the door wider for Thielen, particularly in the red zone where he absolutely flourished in 2020 when he saw 31.7-perecent of the team’s red zone targets and scored 14 touchdowns. Last season, that target share dipped to just 19.2-percent and his touchdown total (10) only fell off slightly, but that was over just 13 games as he suffered a season-ending ankle injury. Quarterback Kirk Cousins has built an outstanding rapport with both receivers over the past two years and now in a pass-heavy scheme, we expect all of them to see an uptick in their work. But if that also means Thielen is going to be leaned on inside the red zone like he was back in 2020, this is going to be one heck of a year to be a Vikings fan. Get those best ball stacks ready. Minnesota could be a league-winner.

We all understand the situation in Detroit. Jared Goff is a very limited quarterback and Amon-Ra St. Brown seems to be his No. 1 target. We also know that, while they signed Chark in the offseason, they also drafted Jameson Williams who is expected to miss some time early while he recovers from a torn ACL, but that he is very much in the plans for the Lions offense once he returns. But does that mean we overlook a talent like Chark? Absolutely not. Listen, the fantasy football ADP dictates that Chark is practically free, so there’s no reason to push him up your boards, but if you are looking for a high-upside receiver who can stretch the field for his team and be a reliable deep-threat, then Chark is your guy. He’s a rock-solid route-runner and he’s got great hands. The knock on him has been the injuries, but let’s face facts…that’s the knock on most football players. You all know I’m not about beat-writer hype stories, but if there is one guy I respect out there, it’s Tim Twentyman who currently covers the team for their website. He has always been one to tell it like it is and still has the respect of the coaches, no matter how critical he can get. When he tells you to keep a watchful eye on Chark, you listen. With Williams not likely to be ready until mid-season, the production you could get out of Chark for a 14th round pick could be absolutely huge. I’m not saying you draft him and start him Week 1, but don’t ignore the production potential here, especially in a best ball format.

Let the angst begin. How confident are we in drafting DJ Moore? It probably depends on who is throwing him the ball, right? Well, according to a recent statement, Panthers coach Matt Rhule said he is unlikely to make a decision on the team's starting quarterback before the second preseason game on August 19. That’s a bit of a bummer, but apparently Rhule feels like an open competition is what is best for his team right now. Rhule is definitely on the hot seat this season and could have been fired in the offseason had he not convinced management that getting rid of offensive coordinator Joe Brady was the solution, so he is likely to overthink every single decision he needs to make in camp. Given what Darnold has done during his short NFL career, Mayfield seems like the obvious choice, but we’re going to have to endure another two weeks of guessing. Moore and Christian McCaffrey are likely the only two Panthers you’re going to want to draft this season, but if you are drafting in a superflex league, maybe the winner of this competition can serve as a third quarterback for you. I’m personally avoiding it, but there are some Baker truthers still lingering out there.