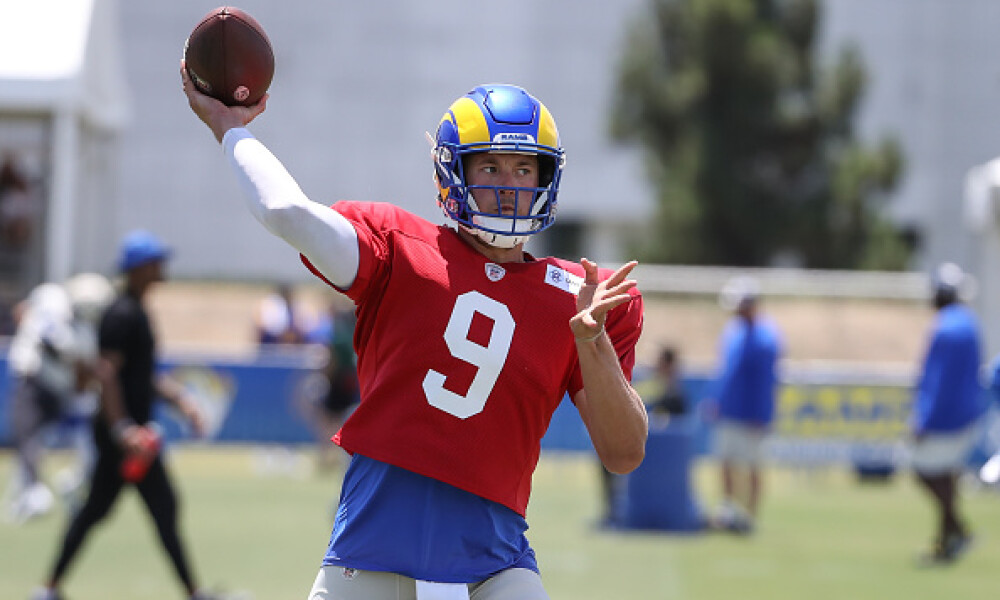 Los Angeles Rams quarterback Matthew Stafford is dealing with “bad tendonitis” in his right throwing elbow, per NFL Network’s Ian Rapoport. This apparently is nothing new for Stafford, who also dealt with the elbow issue last year, and the team doesn’t seem too concerned. Stafford had an anti-inflammatory injection in his elbow back in the spring and didn’t throw during OTAs. Rams head coach Sean McVay said that he doesn’t expect Stafford to participate in team drills over the next week or so to give the veteran QB some rest. McVay also mentioned that this is all “part of the plan” during training camp. This may amount to nothing, but any type of throwing-arm issue isn’t good to hear about a 34-year-old quarterback who’s put tons of miles on that right arm already. In the meantime, Rams No. 2 QB John Wolford is practicing with the first-team offense. For what it’s worth, The Athletic’s Jourdan Rodrigue offered some more quotes from McVay and context surrounding Stafford's elbow.

For those that drafted Diontae Johnson this season, you can all rest easy. Johnson and the Pittsburgh Steelers reached agreement on a two-year contract extension that includes $27 million guaranteed and could be worth up to $39.5 million in incentives, according to ESPN’s Adam Schefter. The 26-year-old wide receiver had been sitting out practices at Steelers training camp entering the final year of his rookie deal, but the “hold-in” has now come to an end. Johnson ranks 20th among wideouts in Howard Bender’s fantasy football draft rankings and he’s currently going in the fourth round of drafts. I think we can all agree it’s good to see him back at practice with a new deal.

First off, always take training camp hype with a grain of salt. We have to listen, though, when it involves Aaron Rodgers and a possible new favorite target with Davante Adams now gone. On Thursday, Rodgers told reporters that Green Bay Packers rookie wide receiver Romeo Doubs has made at least one “wow play” each day at practice. Check out the video below for Rodgers’ full comments on the fourth-round pick out of Nevada. We don’t want to overreact, but it’s worth taking note of any Packers pass-catcher drawing praise from his future Hall of Fame QB. With Christian Watson out with a knee injury and Sammy Watkins missing practice lately, the opportunity is there for Doubs to slowly gain Rodgers’ trust and ultimately return value on his current fantasy football ADP.

Josh Jacobs Suits Up For Raiders in Hall of Fame Game

The Hall of Fame Game is usually reserved for backups, rookies, and fringe roster players fighting for their jobs. It's not often we see a team's starting running back actually participating in the annual NFL Preseason opener. Well, Josh Jacobs was out there last night as the Las Vegas Raiders took on the Jacksonville Jaguars in a battle of backups (and one starter). For comparison's sake, the Raiders sat most of their starting offensive skill players like Derek Carr, Davante Adams, and Darren Waller – and the same for the Jaguars. Yet, Jacobs saw five carries for 30 yards and also caught two passes for 14 yards. This is an interesting development after the Raiders declined Jacobs' fifth-year option before the season, drafted Zamir White in the fourth round, and still have Kenyan Drake lingering. When asked about why Jacobs played last night, Las Vegas head coach Josh McDaniels just mentioned that “it's good for backs to carry the ball in the preseason." Maybe it's good for rookie and backup running backs, but not a guy who's been in the league since 2019. We could see Jacobs' ADP slip after this, especially since Zamir White flashed his talent last night. The Athletic's Vic Tafur summed up the situation for fantasy football managers.

Not many relevant fantasy football players took the field last night in the Hall of Fame Game, but we did have some names to keep an eye on. One guy who did show off his flashy talent was Las Vegas Raiders rookie running back Zamir White. The fourth-round pick out of Georgia saw plenty of work with a game-high 11 carries for 52 yards and added in three receptions for 23 yards. While Josh Jacobs is the incumbent starter, we could see White carve out a legit role in the Vegas offense as a possible fantasy football sleeper. Yes, it’s just preseason, but the rookie’s upside was on full display right from his first touch of the game.

If you’ve been paying attention to the NFL training camp reports out of Buffalo, one name has generated more buzz than most on the offensive side of the ball. Wide receiver Isaiah McKenzie is drawing praise from local beat reporters, fantasy football analysts, and even his own Bills teammates. McKenzie is working as the Bills’ first-team slot receiver in camp and taking advantage of Jamison Crowder missing practice time recently. We all know Stefon Diggs and Gabriel Davis are the top two targets for Josh Allen, but McKenzie could beat out Crowder for that starting slot role and emerge as a fantasy football sleeper this season. Allen himself had a lot to say about McKenzie.

In last night’s Hall of Fame Game, a scary helmet-to-helmet hit resulted in Keelan Cole’s early departure from the preseason opener. The Las Vegas Raiders wide receiver stayed down for a few minutes before walking off under his own power. We’ll see what the diagnosis is, but it could be some type of concussion considering the hit to the head. Cole is pushing for a starting spot in the Raiders offense as the No. 3 WR next to Davante Adams and Hunter Renfrow. Stay tuned to see how serious the head injury turns out to be.

Fantasy football managers, especially in the dynasty format, have been intrigued with Kyle Philips ever since the Tennessee Titans drafted him in the fifth round of the 2022 NFL Draft. Well, now we have more reason to get excited about the rookie this season. Philips is getting slot receiver reps with the Titans’ first-team offense in practice, per Terry McCormick of TitanInsider.com. The Tennessee receiving tree is wide open following A.J. Brown’s offseason departure and tons of receptions are up for grabs. There’s newcomer Robert Woods, first-round rookie Treylon Burks, and holdover Nick Westbrook-Ikhine – but Philips is the wild card. If the rookie becomes a reliable target out of the slot for Ryan Tannehill, then he could end up being a solid PPR option for our fantasy football lineups.

Apparently it’s precautionary, but Devin Duvernay has now missed four straight days of practice due to a thigh bruise. The third-year wide receiver is expected to take on a starting role in the Baltimore Ravens offense with Marquise Brown now in Arizona. Even though it doesn’t seem serious, Duvernay’s thigh issue is still something to monitor as training camp rolls on. If he can return to practice soon and build chemistry with Lamar Jackson, we could have a fantasy football late-round steal on our hands. Let’s get him back healthy first, though.