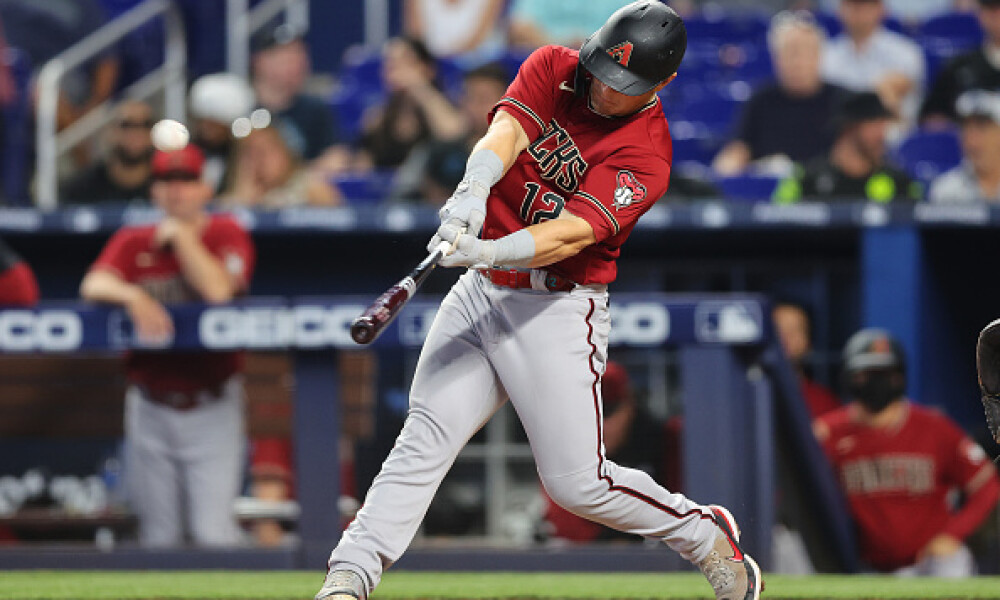 If it wasn’t for injuries, we would all be masters and wizards when it comes to fantasy baseball. The 2022 MLB season has had no shortage of injuries so this season has been no different compared to previous years. Our MLB Injury Report is consistently being updated and our MLB Lineups page can be helpful in identifying which players you can find on the waiver wire as a short-term replacement. Arizona Diamondbacks catcher, Carson Kelly, was placed on the 10-day injured list with a strained oblique. The injury isn’t believed to be serious, but the concern for Kelly should be regarding playing time when he can return. He has even said that he views this injury as an opportunity to reset himself mentally and physically. Honestly, that couldn’t hurt him. He’s slashing .105/.150/.123 on the 2022 season and he needs something to help him turn this year around. For the next week or so, Daulton Varsho is set to take over behind the backstop. Varsho hasn’t been featured as a catcher very much this year, but he did get the start on Sunday. Now I can’t say that you should rush to your league’s fantasy baseball waiver wire to grab him. He’s owned pretty heavily. But over the last two weeks we’ve touched on Adley Rutschman and Jonah Heim as potential waiver wire targets and they’re both still available. This week I’ll turn my attention to a player that has performed well to start the season. But if you do have him on your roster let’s take a look at why you should be optimistic about him for the upcoming week.

Let’s hit on the numbers first. He’s slashing .255/.333/.482 with six home runs, 15 runs scored, 15 RBI, and a few stolen bases as well. What helps him is that he’s also been hitting toward the top of the order, but that hasn’t happened every day. He may not always be utilized against lefties, but he’s crushed right-handed pitchers so far with all six of his bombs coming off righties.

Ahead of the 2021 fantasy baseball season I previewed Varsho with a handful of other catching prospects and offered this up about him at the time: “Daulton Varsho is a very intriguing player to monitor heading into your fantasy baseball drafts. The allure with Varsho is that you’ll have a catcher-eligible player that could very well make many, if not most, of his starts playing center field. If that’s the case you’re looking at a player that could potentially get 600 plate appearances and given his minor league numbers there’s 15/15 potential, with 20/20 upside. And if he hits that ceiling, he’ll be the first 20/20 catcher in over 20 years…” The 15/15 possibility is in play this year since he already has six dingers and three swipes. 20/20 might be a little too bullish on Varsho.

This week could be interesting for Varsho and the Diamondbacks. Arizona is about to head out on a road trip with EIGHT games slated for this week: four against the Dodgers and four against the Cubs. In terms of volume and quality of matchups, that’s pretty good. Varsho is also hitting .292 on the road so far this season. The Dodgers’ pitching staff has certainly looked great to start the 2022 campaign and they’ll likely give Arizona fits. However, assuming Varsho plays at least three games in each series I think he’s perfectly viable in season-long leagues and if the price is right against the Cubbies he can be considered for DFS as well.

The injury to Carson Kelly really opens a door for Varsho to get consistent playing time. With the promotion of Alek Thomas (and his subsequent phenomenal play), the outfield was a little crowded between Thomas, David Peralta, Pavin Smith, and Jordan Luplow. So the injury to Kelly means the DBacks can keep Varsho’s bat in the lineup and play him at Catcher. And assuming they want to give him an off day they can utilize him at DH to at least keep his bat in the lineup. He’s definitely outplayed Kelly to start the year and you have to wonder how married the Diamondbacks are to Kelly at this point. He got off to a promising start hitting .338 with six home runs a year ago before being placed on the IL in mid-May with a fractured toe. He would go on to battle injuries for the remainder of the season and hit just .205 with seven home runs.

Hopefully Varsho can take advantage of this opportunity to plant himself regularly in the Diamondbacks lineup whether it’s at catcher, DH, or a spot start in the outfield. With the Diamondbacks currently sitting at 18-17 and just four games out of the lead in a very competitive division, they would be doing themselves many favors making sure to get their best hitters in the lineup. I’ll be keeping my eyes on Varsho this week.