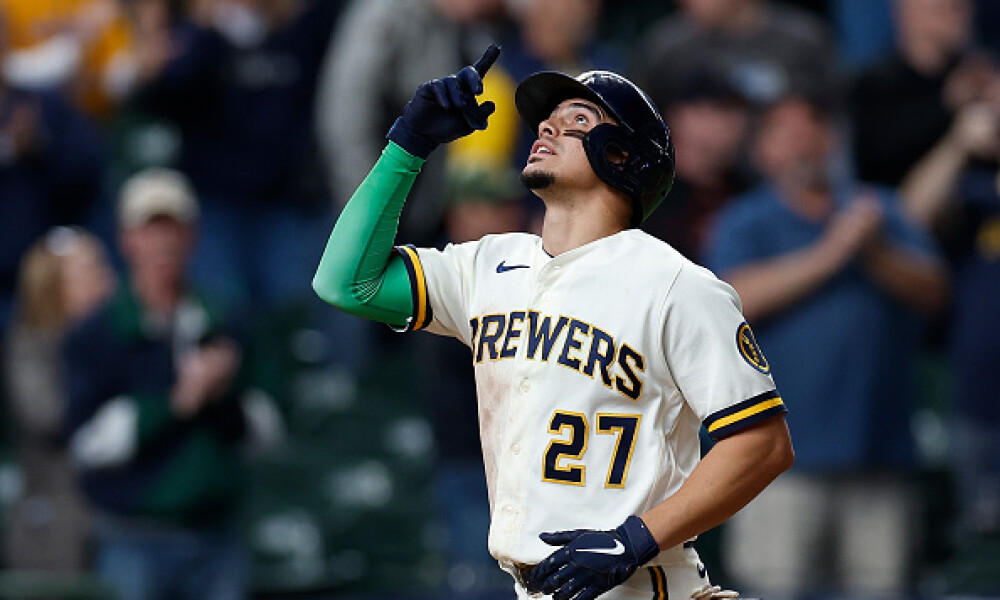 Every Friday we spotlight the shortstop position in Fantasy Baseball as a part of our MLB Player Spotlight Series. This MLB series takes a look at a player at a specific position each week and whether we should be looking to acquire or trade them, potentially cut them, or add them to the fantasy baseball waiver wire if they're available. Are these spotlighted players buy-low or sell-high guys within your fantasy baseball lineups? That's what we're here to help you navigate. Of course, we have plenty of tools here at Fantasy Alarm so make sure to check out our MLB page and browse through all of our content before making your final roster decision. Two weeks ago we spotlighted Astros SS, Jeremy Peña, and last week we took a look at Boston's SS, Xander Bogaerts. This week, Milwaukee's Willy Adames takes center stage. Will Adames' power continue to play in Milwaukee or is he a trade candidate while his stock is high? Let's dive in!

Heading into the 2022 fantasy baseball season, most analysts had Willy Adames outside the top-15 shortstops in their fantasy baseball rankings. His ADP by the end of the draft season was pick 145 - the 20th shortstop off the board. Anyone who waited on shortstop, and then waited some more, is thrilled to see Adames sitting atop the positional rankings through the first month of the season. For a player who may have been waiver wire material early in the season for many, he is outproducing even the most optimistic expectations.

How has he done it and will it continue? These are the questions fantasy managers must answer as we decide how to value Adames for the rest of the season.

Willy Adames Has Power For Days

The most impressive thing for Adames early in the 2022 season is his incredible power. Only eight MLB batters have more extra-base hits than his 14 (six doubles and eight home runs). He leads the shortstop position in home runs and RBI through the first five weeks of the season and only Jeremy Peña is truly challenging him in both of those categories right now.

Every power metric you could point to is going in the right direction for Adames, which undoubtedly aids the surge we have seen to start the season. His Statcast numbers jump off the page compared to past seasons. His average exit velocity (90.7 mph) is the highest it’s ever been. His launch angle (18.8 degrees) and barrel rate (15.5%) are career highs which would explain why his hard-hit percentage is tied for a career-high as well.

But it’s the clear trend we are seeing in his batted ball type that helps explain why he is already one-third of his way to his career-high in home runs in just five weeks. Here are Adames’ ground ball and fly ball trends since he entered the league in 2018 with Tampa Bay.

These trends and his launch angle make it clear he is making more of an effort to get the ball in the air, and it’s paying off with huge dividends. The scary thing is, Adames isn’t helping you in the batting average or on-base categories this season, but his plate discipline tells us he could get even better.

The Low Average is Deceiving

The disappointing part of Adames’ season, of course, is the .215 batting average. Since he is a career .258 hitter, we must find out if Adames is selling out for power this year at the expense of the batting average. Digging into the numbers, it seems to me that this average is a number that is certain to go sharply up.

Adames has made a living as a player with a higher-than-average batting average on balls in play (BABIP), but his BABIP this year (.237) is a full 100 points lower than his career average. His walk rate is over 12% which is the highest of his career so he is seeing the strike zone well. And he has dropped his outside-the-zone swing percentage from a career 24.7% mark to 21.3% this season.

According to Baseball Savant, his expected batting average is a much better .270 and his expected slugging percentage of .591 is miles better than his actual figure in 2022 (.463).

Many players sacrifice batting average for power as they progress through their careers. Adames seems close to unlocking a way to have both at the same time.

This looks like a player who is putting everything together in 2022 for his age 26/27 season. The batting average should improve dramatically and he already leads the position in homers, RBI, and runs. With a bit more luck on the balls in play, we could be looking at a top-five shortstop year for a player everyone could have for free in their drafts six weeks ago.