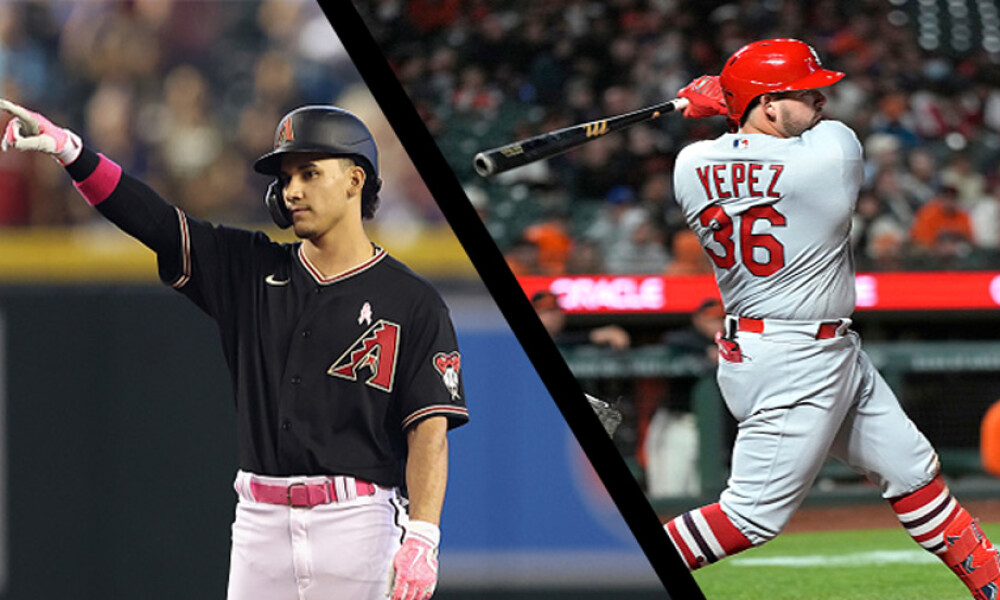 MLB Prospects Called Up This Week

The beginning of Arizona's next core is starting to appear in the majors. We’ve seen Seth Beer all season and now their top prospect, Alek Thomas, has been called up to join the big-league team. A second-round pick in 2018, Thomas has always shown the great power-speed combo that got him drafted that high. The average and on-base skills are plus traits as well. In 300 minor league games, 58 at Triple-A Reno, he’s slashed .309/.386/.495 with 34 homers, 231 runs, 155 RBI, and 43 steals. That’s basically on pace for a .285 average or higher and a 20-20 season in the majors. He’s a must-add off of the fantasy baseball waiver wire as he stars for the Diamondbacks.

In a bit of a surprise call-up, the Seattle Mariners brought up George Kirby from the minors last week. Why was it a surprise? He’d only pitched 50.2 innings at Double-A between 2021 and this year with no innings at Triple-A at all. When he was drafted in the first round of the 2019 draft, he was a command-over-stuff type of pitcher – but that’s changed a little bit. The stuff has gotten better in terms of velocity as he’s now sitting 96-98 mph with the fastball, as well as getting two distinct breaking pitches. The four-pitch mix is finished off with a changeup and all four pitches are above-average to double-plus. Kirby should be up to stay the rest of the year and his floor, eventually, is as a No. 2 starter with a great K-BB ratio.

It’s been a slow burn for Juan Yepez. Just how slow? He’s been in the minors since 2015 before taking off in 2021 across Double-A and Triple-A. Prior to last year, he hadn't posted an OPS better than .789 nor had he reached double-digit homers either. Oh, what a difference a year makes. Yepez hit 27 homers with a .969 OPS last season before also destroying the Arizona Fall League. Now, he’s been up in the majors for seven games with a .444 average and two homers while playing a few different positions. The St. Louis Cardinals' offense has been up and down this year and with the versatility that Yepez offers, he should be up for the rest of the year. As for regression to his previous minor league numbers, he refined his approach and swing – so that shouldn’t be an issue. He won’t hit over .300 for the full season, though.

You’d think that a catcher in the Kansas City system would be blocked right? Not the case for MJ Melendez, though. The bat was just too good to leave down on the farm once the backup catcher role was opened up. Let’s not forget he can also be the DH. The 2021 season was an absolute coming out party for Melendez as he split time between Double-A and Triple-A for 123 games. He slashed .288/386/.625 with 41 homers, 103 RBI, 95 runs, and even three steals in that span. The power is his calling card with a slightly below-average hit tool. For a catcher, though, that’s perfectly fine. The Royals have Salvador Perez under team control through 2026, but they don’t have the DH position locked down. That’s where Melendez and Perez will split at-bats going forward.

Let’s get one thing straight right off the bat for Brendan Donovan: there’s not a lot of fantasy value here. Sure, we’ve said for a while that Cardinals players will come up without hype and turn into productive players – but not everyone fits that mold. Donovan is in the majors because of his above-average hit tool, oh yeah, and his six positions on defense. The power, speed, and everything else aren’t even average. While he’s posted a career .285 average in 242 minor league games, Donovan has tallied just 21 homers and 23 steals with half of those coming in 138 games at A-ball. The versatility is nice for actual baseball teams, but the lack of offensive skill makes it tough to add for fantasy baseball.

Next MLB Prospects Coming Up

I get it, you’re thinking this is nothing but a Cardinals write-up. I promise it’s not intended. You’ve heard me talk about Matthew Liberatore before a few times, but there’s now an opening for the left-hander to come up. Adam Wainwright is on the COVID-IL and Liberatore is lined up to start this weekend – which is when Wainwright would’ve pitched. The former first-round pick and hopeful ace isn’t quite living up to that billing, but he’s still been very good. The southpaw went 14 innings with six hits and three walks allowed, and no runs given up, to finish off April. Oh yeah, he posted 16 Ks in that stretch too. His four-pitch mix all grades out as at least above-average with plus-control allowing them to play up. His floor is a No. 3 starter with excellent control, which has allowed him to post a 3.16 K:BB ratio in the minors.

The Rays need all the help they can get right now on offense and even defense in some spots. That’s where Jonathan Aranda comes in. He’s got a ton of positional versatility and can play anywhere on the infield. In the last 112 games, all since hitting Double-A in 2021, he’s slashing .332/.404/.538 with 14 homers, 80 RBI, 75 runs, and five steals. That’s a 162-game pace of 20-100-100-7. Clearly, that pace won’t happen in the majors, but it proves his bat has woken up. He does have a 55-grade hit tool and average pop so if he gets regular at-bats around the diamond when he comes up, don’t be shocked to see him posting a .280 AVG with a shot for 20 homers over a full year.

Much like the Rays, the Rangers can use a lot of help offensively. Bubba Thompson could just be some of that help. He was a first-round pick in the 2017 draft and, since then, has been methodically moving up through the Rangers’ system. Now 23 years old, the outfielder is putting together a great start at Triple-A after a solid showing at Double-A last year. He’s been known as a pop and speed guy with 55-grade power and 65-grade speed. The hit tool and pitch recognition have been a problem, though. In 300 minor league games, he’s hit .266 and that’s after hitting .275 in 104 games last year and .330 in 25 games this year. However, he’s gone deep 35 times with 90 steals in that same span. Thompson has a lot of swing and miss in his game, still, and that caps his upside. You’ll live with a .245-.255 average, though, if he produces 18-22 homers and 30-plus steals. He’s already stolen 16 bags in 25 games at Triple-A Round Rock this year. He should be up soon as Adolis García, Kole Calhoun, and Eli White continue to struggle for Texas.