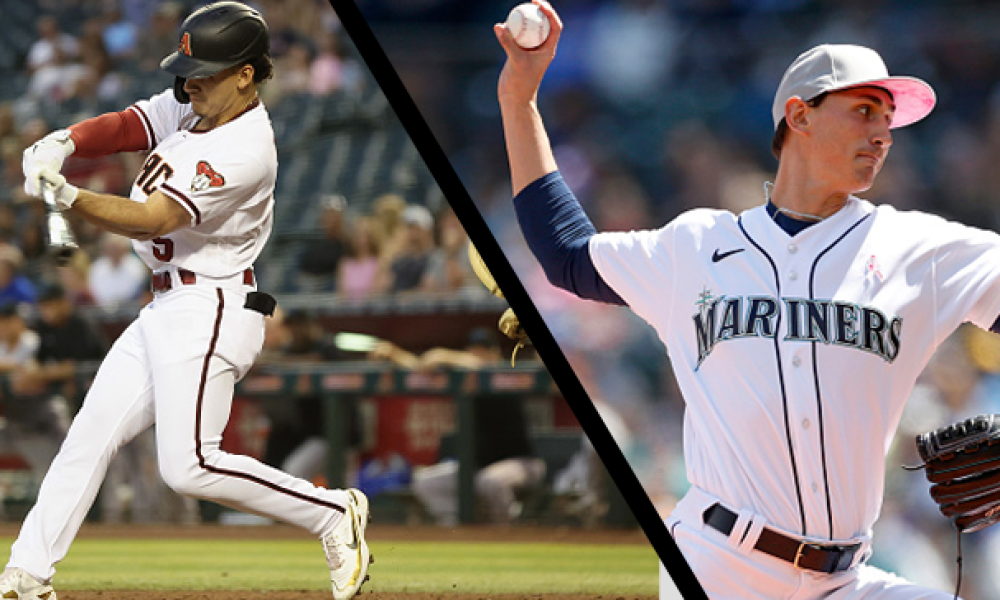 Let’s get out of the gates swinging here with Arizona’s best prospect. Alek Thomas got the call to the big leagues with Daulton Varsho moving behind the plate to fill in for the injured Carson Kelly, and I don’t think he is going anywhere. Arizona has one of the worst offenses in the league and they are clearly are a rebuilding team, so now that Thomas is here, there is no reason not to keep him at the big-league level. For now, Thomas is still at the bottom of the order (eighth or ninth), but I wouldn’t expect to last long, and regardless, it’s not holding him back from a production perspective through four games. Thomas picked up two hits on Wednesday for the second straight game which now gives him five hits in 13 at bats while striking out three times. With 18 home runs between Double-A and Triple-A last season and a combined five this year (his first major league homer came on Wednesday) Thomas can be a five-category contributor with a 15/10 floor. Thomas’ NFBC price will likely trend higher than what we see here, especially in 15-team leagues.

Alfonso Rivas did well in his cup of coffee, 18 games, last season as he hit .318 but that is clouded by a .481 BABIP. After hitting. 538 in three games to begin the seasons in Triple-A, Rivas has gotten another chance with the Cubs and is hitting.289 in 46 plate appearances. Once again, we are dealing with a high BABIP (.391) and Rivas’ 28.3% strikeout rate is going to be a problem, but we also can’t argue with the results to this point. Chicago hasn’t been shy about plugging Rivas right into the middle of things in their lineup, and with 10 RBI and six runs scored, he has been a capable producer.

From the bright and shiny new objects to the boring Brandon Drury we go, but there is value to be found everywhere. Essentially by default, Drury has found himself with 26 games played and 99 plate appearances to this point for Cincinnati, and that playing time doesn’t appear to be going anywhere due to lack of options for floundering Reds. However, the performance has supported the playing time as Drury is hitting .267 with six home runs, 18 RBI, and 17 runs scored to this point. With a .291 ISO, Drury’s power has been on full display this year with a solid 14-degree launch angle to back up the home run production. Drury has career high barrel (17.7%) and hard-hit rates (51.6%), and with the consistent playing time, we should ride the veteran for as long as possible.

You had to know that this one was coming, right? Over the last seven days, Josh Naylor has three home runs with two coming in the same crazy game, along with an insane 14 RBI. It shouldn’t come as a surprise that Naylor has five home runs in 77 plate appearances to this point as power has long been an overarching tool for him and his .264 ISO is also evident of that. Naylor has also driven in 22 runs while scoring 10 to go along with his .347 batting average (.345 BABIP). What I also like about Naylor is his 13% strikeout rate in conjunction with a 11.1%-barrel rate and 49.2% hard hit rate. One point of concern his Naylor’s 7.6%-degree launch angle and fly ball rate at just 28.6%, but overall, there is a lot to like here and I’m still not sure that as of Wednesday night, he is still available in 62% of Yahoo leagues.

Stolen bases are a finite resource, and leaving six of them on the waiver wire in 59% of Yahoo leagues is still going to be a little strange to me. Kolten Wong has at least one hit in seven of his last eight games (three with multiple hits) and he is on the right track towards recovering after a slow start. Wong is still hitting just .232 on the season but he has six stolen bases along with 17 runs scored while continuing to bat atop a strong Milwaukee lineup.

Let’s cut right to the chase with George Kirby, and ultimately the depth of your league and the need for starting pitching should influence how heavily you go after the right-hander. It’s hard to find many better debuts than we got out of Kirby as he struck out seven batters in his shutout innings while allowing four hits and not walking a batter. At this point, Kirby is up to 60% rostership in Yahoo leagues, and that number will only rise and we know his FAAB price in NFBC leagues is likely going to creep to at least 40% of your initially $1,000 budget (hence the wide spread), so I broke my 50% rule and included him here. Kirby is simply that good and it’s hard to argue with any of the minor league track record.

You had to know this one was coming too as Reid Detmers was rostered in just 15% of Yahoo leagues as of Wednesday night which was just a day after his no-hitter. The only blemish on Detmers’ record was a single walk in the sixth inning but from a fantasy perspective, we can’t ignore the fact that the southpaw only struck out two batters while making history. The no-hitter brought Detmers’ ERA down to 3.77 (4.04 FIP) but he is striking out just 5.81 batters per nine innings while benefiting from a .174 BABIP. A walk rate of only 2.32 batters per nine innings has helped here. After a rough cameo with the Angels last season, a 7.40 ERA in 20.2 innings last season, things have certainly gone better for Detmers in 2022.

For the second straight start, Tyler Wells limited his opponent to just one run, and on Wednesday he picked up his first victory of the year against Kansas City. After starting the season off slowly, Wells has pitched 11 innings in his last two starts while bringing his ERA to 3.75 (3.93 FIP) on the season. While the strikeouts are at a minimum here, 6.38 per nine innings, Wells does limit the free passes (1.50) to go along with a line drive rate of just 14.7%. The fact that Wells’ next start comes against Detroit also helps here.

With David Robertson on the COVID list, this is a grab for some temporary saves, and for now it appears that Rowan Wick is that guy for the Cubs. Mychal Givens got the seventh inning on Wednesday and he promptly allowed two runs while blowing the lead. That did lead to the victory for Givens after Chicago scored in the next half inning, but that also opened the door for Wick to grab his second save of the year in a two innings stint. Wick’s ERA is now down to 0.77 on the season while striking out 14 batters over 11.2 innings. Chase the stray save, stay for the strikeouts and go from there.

Yikes, season debuts don’t get much worse than what we saw from Dylan Floro on Tuesday, but he is rostered in just 26% of Yahoo leagues and my thought process is that he will regain the closer job in Miami shortly. Let’s look past the three runs and four hits Floro allowed in one inning of work and instead look at the 15 saves and 2.81 ERA he had last season. If you have the roster space or are in the position of mining for saves, roll the dice on Floro while he is at his cheapest.