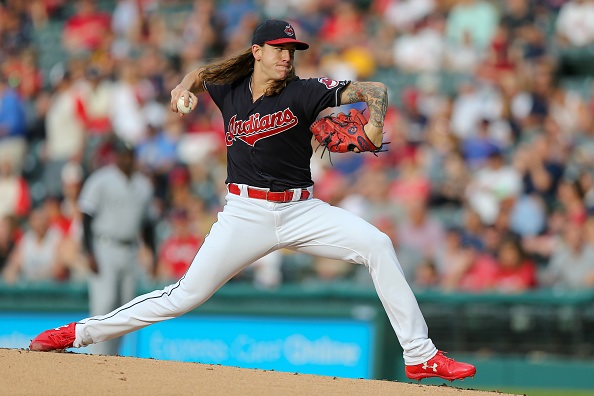 Week Thirteen arrives full of hope and promise, with a fine slate of two-start options, including a baker’s dozen of top-tier starters to employ in your starting rotations. Additionally, there are another 14 middle-tier picks that offer fantasy production worthy of your consideration during the upcoming scoring period. With a large slate of dual-start pickings, naturally there is a large group of unusable starters as well, but you know not to employ them this week, right?

These 13 SPs are the ones you should wind up and let go, plugging them into your rotations no matter the matchup or venue in which they will toe the rubber. It is a good sight to see Hamels back in the fold of the top-tier starting pitchers in baseball. You should expect to see him wearing a different uniform before the month of July is through. He does have a nice set of starts coming up in Week 13, making him extra attractive to go along with his two-start status. Taillon and Gonzalez have not looked like aces, lately, but they both have the pedigree to provide excellent stats for their owners, and unless they blow up dramatically this coming week, should certainly be worthy of ace status (or at least SP2 ranking) going forward through 2018.

Peralta opens the middle tier and is coming off a quality start (QS) against the host Pirates, holding Pittsburgh scoreless on just two hits over six innings pitched (IP). He has an alluring 2.30 ERA and miniscule 0.89 WHIP in his three starts in 2018, which includes a pair of mid-May outings. He finally gets a home start when KC visits to open the week, but then faces the Reds on the road. He has been an effective road warrior to date this season, and he is the best middle-tier option in Week Thirteen.

Montas has been effective in four of his five starts since joining the A’s rotation back at the end of May, suffering just a blip on the radar when he allowed the Astros to touch him up for five earned runs on 11 hits and four walks (seven runs were scored by Houston against the 25-year old righthander). He gets the Tigers on the road, where Detroit is much more dangerous, but at least is taking on the Indians at home in Week Thirteen. He is not a great K source with a mediocre 5.61 K/9 rate over his 33.2 IP, and his background metrics (82.5% strand rate, 3.79 FIP vs 2.41 ERA, .289 BABIP) hint that his early success may be due for a negative correction, but Oakland SPs are generally regarded highly by this writer.

Fulmer was cruising along nicely in control in his most recent start in Cincy before a couple of pitches to Scooter Gennett and Eugenio Suárez resulted in back-to-back dingers and undid all his early success against the Reds. His prior two starts were a pair of one earned run QS, against division rivals Cleveland and Minnesota, and he sports a 3.12 ERA over his last four starts comprising 25.2 IP, where he has compiled a useful 23:6 K/BB ratio. As noted, Detroit is a better home team this season by far, and he fortunately gets the surging A’s at Comerica to open the week, then heads to Toronto to face the sub-.500 Blue Jays, so the matchups are somewhat favorable over his two-start week.

Foltynewicz was scheduled to throw on Friday, to test his injured triceps which sent him to the DL and out of the Atlanta rotation earlier this month. Assuming all goes well, he will bring his elite 10.71 K/9 rate to bear against the Reds at home and then on the road in St. Louis to wrap up the week. He is backed by the surprisingly good Atlanta offense, making him well worth utilizing this coming scoring period. 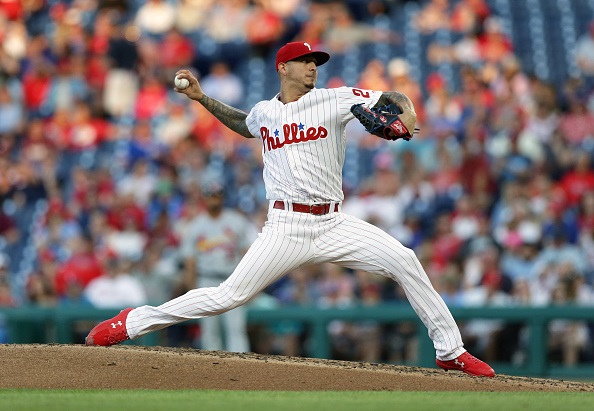 Velasquez, despite a couple of less than stellar efforts in his last three outings, is still a desirable SP due to his elite K production (10.87 K/9 over 80.1 IP this season). He lacks control, though (3.25 BB/9 rate in his 15 starts) and is prone to serving up the long ball (1.34 HR/9 in 2018). Since he is much more likely to yield round-trippers to opposing batters at home, having a pair of games at Citizens Bank Park is not ideal for his Week Thirteen fortunes. Still, you have to like the strikeout potential even with the Mets and Nationals on tap, a couple of teams that do not whiff inordinately this season.

Hernandez has not looked like the ace he once was, by any stretch, but he has been putting up good numbers for a team that is playing extremely well. He has held opponents to just a single earned run in three of his last four appearances on the hill, although he was roughed up by the Rays to the tune of five earned runs in the midst of that series of starts. He is just an average strikeout producer these days (7.66 K/9 over his 89.1 IP in 2018). His first outing is on the road at Camden Yards, never an ideal place to pitch even with the Orioles’ struggling offense, but then takes on the weak Royal squad at home, a spot where he has been much more successful in exactly half of his starts.

Hendricks has been inconsistent this season, tossing gems, then while not exactly stinking up the joint, not pitching well enough to generate any trust among his fantasy owners. He has not been lasting long in games, reversing his early season trend, which further limits his utility as a SP in fantasy rotations. His K rate is just below seven strikeouts per nine innings pitched (6.95 K/9 over 89.1 IP) and he gives up too many homers (1.41 HR/9, with nine of the fourteen round-trippers having left Wrigley Field’s friendly confines in 2018). Aside from the homer rate at home, he has been much better in Chicago this year, so his second start when the Cubs host the Twins is his most appealing mound trip this coming week.

Gausman came within one out of stringing together three QS over his last three treks to the bump and racked up 16 Ks over those 18.1 IP. Of course, because he pitches for the Orioles, he went 0-1 over those three starts. He still sports an ugly 1.39 WHIP with an elevated 4.38 ERA this season, which limits his value as a fantasy SP option, despite his recent success as a pitcher. He has a pair of home starts this coming week, but that is of little consequence, given his similar home/road splits.

Mahle is arguably the top SP in the Cincinnati rotation at this point in the season, with the continuing struggles that expected ace Luis Castillo has experienced attempting to repeat his 2017 success. He offers a good but not great strikeout rate of 8.44 K/9 over his 81.0 IP this season. He is walking too many hitters to be fully functional as an SP for fantasy purposes (3.56 BB/9 in 15 starts), and his BABIP of .299 and 4.99 FIP (vs his seemingly attractive 3.89 ERA) hint that he has been somewhat fortunate with his pitching results in 2018. Neither matchup this week is favorable, with him opening on the road against the Braves and then hosting the Brew Crew at Great American Ballpark to close out the scoring period, and that puts him in the bottom half of this middle tier.

Miller is making his long-awaited return from Tommy John surgery, and is coming off a largely unimpressive four-game rehab assignment where he posted a 4.66 ERA over 19.1 IP at Double-A and Triple-A. He will need to pitch well to maintain a rotation spot, as Robbie Ray is nearing a return to action in the coming days. He does have a couple of cushy matchups with the Marlins hosting him in their pitcher-friendly park for his initial 2018 MLB appearance, and then heading back to Arizona to face the visiting Giants.

Pena looked usable over four innings in his call-up start against Arizona at home, yielding just one earned run on two hits with six strikeouts. The three walks he handed out are a concern, to be certain, but with the rash of injuries the Angels have endured within their starting rotation, he seems likely to hold onto his role as a SP for the near future. Getting to face the Royals and Orioles in his two times toeing the rubber speaks in his favor.

Matz suffered through a rough outing at Coors in his last start, after putting together a trio of QS prior to that five earned run loss. Pitching for the Mets and their frequently non-existent offense makes such ineffective performances costly for a staring pitcher, so even with a pair of decent matchups in store for him, Matz is a weak option for fantasy purposes. At best, you can plug him in and hope for some strikeouts due to his 7.99 K/9 rate over his 71.0 IP.

Lynn is providing some value to the Twins, with five of his last six starts being of the quality type, and he managed to hold the formidable Boston offense to just one unearned run over five full innings in his most recent start. His lack of control is his biggest weakness (his BB/9 ratio is a terrible 5.62 over 73.2 IP) although he does generate a huge number of groundballs to help himself (2.06 GB/FB ratio) and he has improved his strikeout rate as well, to a surprising 8.92 K/9 in 14 starts. His first of two road starts is against the White Sox, and that is his best game usage in Week Thirteen.

Loaisiga should stick in the Yankee rotation for the time being, with Masahiro Tanaka ’s hamstring keeping him on the sidelines at present. He offers superb K potential, although his control has abandoned him in the majors, which was not his propensity in the minors prior to his recent promotion to the MLB. Being backed by the Yankee offense helps to offset a pair of less than desirable matchups in Week Thirteen.

It is a shame that Arrieta has worked to demote himself to this tier, but he has been incapable of being selected as a fantasy pitcher. If he can build on his six innings of three earned run pitching against the Cards in his last trip to the mound, then maybe you can deem him worthy to reenter your rotations.

FANation Chat is now live on the site. Feel free also to send any starting pitching or other fantasy baseball questions to ia@fantasyalarm.com for a private response to your specific issue. The more detail you can provide about your team and league, including settings (H2H vs roto, points or categories, weekly or daily moves, roster size, league size, etc.) the better the response will be suited to your individual situation. As ever, good luck and Godspeed in all your fantasy endeavors. Junis might have been of more interest with a two-start week except for the matchups in both his games this coming week, which do not project out favorably. The balance of the lower tier SPs should simply be avoided when setting your lineups in Week Thirteen.