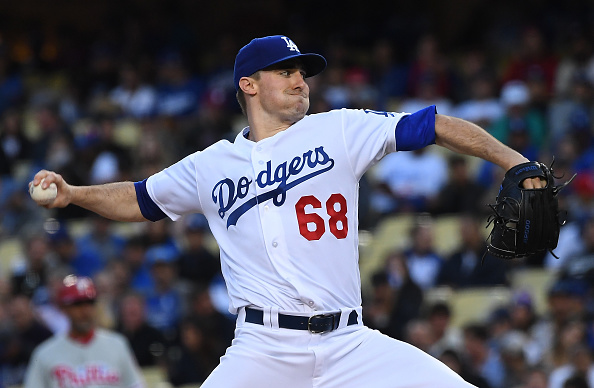 We go from a week with nearly 50 two-start pitching options back to a scoring period with just over 30 choices to consider. Fortunately, there are more hits than misses, although there is not a tremendous wealth of low-owned SPs that you can readily add to your rosters, but let’s take a walk through the tulips to see what is blooming in our garden, so to speak.

Not a whole lot to plug into your rotations without worry this week, unfortunately. Rodriguez has a pair of good matchups, elevating him from the middle tier in Week Ten, and Stripling joins the rarefied ranks based on his sterling results since becoming a member of the Dodger starting staff. The Dodgers will rely on him to continue his success on the mound a great deal going forward with Clayton Kershaw ’s back sending him to the DL.

Eovaldi was tremendous in his first start after being activated from the DL, tossing six no-hit innings with just one walk as a blemish on his return to the Tampa Bay rotation. Coming off Tommy John surgery, look for the Rays to manage his innings carefully for the time being. His first start is against Washington’s ace, Max Scherzer , which is somewhat off-putting, but the second home start against Seattle, even with Paxton on the hill, looks more promising.

Musgrove has limited the opposition to just a single earned run in his two starts after coming off the DL with shoulder issues and has racked up 12 strikeouts over those 14 innings pitched (IP). His control was not as sharp in his second start, with four free passes handed out, ballooning his WHIP to a still extremely attractive 1.14. He gets to face the Dodgers at home but does head to Chicago to take on the Cubs at the end of Week Ten. Given his success since being activated, though, he is a good two-start option this coming week and being owned in just 51% of Yahoo leagues (just 31% of ESPN leagues), he is a worthwhile waiver pickup right now.

Richard has been pitching deep into games and has tossed four quality starts (QS) in his last five outings. He has not been great away from Petco, but his second start is at and against Miami, which should lessen his road worries. He is not anything more than an average strikeout producer, and he has yielded three deep shots in his last couple of times toeing the rubber, but in a week of limited two-start options, he deserves consideration in both his appearances.

Manaea has looked mortal over his last several starts, but still carries a useful 3.60 ERA heading into Week Ten, and his WHIP is a stellar 0.97. He has a pair of excellent matchups coming up too, with Texas and Kansas City on tap. Despite his lackluster strikeout numbers (6.72 K/9 over his 12 starts, comprising 75.0 innings), Texas has the potential to add to any pitcher’s strikeout numbers. If there were a week to turn around his recent struggles, this is it coming up.

Guerra has two road starts in Week Ten and has been much better when traveling than at home so far this season. Neither opponent is a pushover, so that should temper expectations for his production this scoring period, despite his road-warrior tendencies to date. He offers good strikeout potential (8.45 K/9 over his 54.1 IP in his 10 starts in 2018), but better control would certainly help him (3.31 BB/9).

Romero suffered his first disaster as a starter in the majors against the Royals, yielding eight earned runs on nine hits (but only one walk), and will look to get back to his successful ways in the coming scoring period. He has a couple of home starts in Week Ten, and the first is against division rival Chicago, although the second outing vs the Angels is not as inviting. Prior to his meltdown in KC, he had been sporting a superb 1.88 ERA and 1.12 WHIP, both of which were due to negatively regress at some point. Perhaps he got the adjustment out of the way and can return to being nearly a strikeout per inning performer on the mound (8.90 K/9 through 30.1 IP in 2018).

Freeland has only allowed more than three earned runs in a start twice out of his 11 games this season and had been working on a stretch of six quality starts before the Giants chased him with one out in the sixth in his most recent time on the bump. He does head to Cincy’s Great American Ball Park for his first start this week but gets the less than awesome Arizona offense at home in his second start and he has been excellent at Coors Field in his four starts there in 2018.

Duffy has thrown a pair of quality starts, holding opposing hitters to just a single earned run in each of those contests. He does not offer much in the way of strikeout potential, with an uninspiring 7.52 K/9 over his 12 starts this season, and his control is not good either (4.31 BB/9 over his 64.2 IP). He is on the road for both his Week Ten starts, so it is just recency bias that keeps him in the middle tier for now.

Odorizzi was banged around by the Indians to the tune of eight runs (seven earned) over just 3.2 innings in his last start. He had been effective prior to that, giving up just nine earned runs over his previous 33.1 IP, with good control and dominance (34:10 K/BB ratio over those games). He has two home contests coming up this week and gets the sorrowful White Sox offense for his first outing. The second start against the A’s at week’s end holds less promise.

Teheran has been horribly inconsistent this season, although he had rebounded from a pair of poor starts to put up a couple of quality starts (where he was saddled with two losses, alas). His control has been awful all season (4.03 BB/9 over his 12 starts) and he has not been dominant at all with just 12 strikeouts in his last 24.0 IP. His splits show him as a better road pitcher this season, and he does have two games away from SunTrust Park, in San Diego and LA, so there is that going for him in this scoring period. Plus, he is pitching for a surprisingly good offensive team, so if you want to take a chance, this is a good set of games to roll the dice.

Bundy offers great strikeout potential (10.88 K/9 over his 68.7 IP this season) and has been acceptable in terms of pitching fairly deep into his last four starts (seven, six, nine and six innings pitched over those starts) and not giving up too many runs, falling just one earned run short of putting together a four-game quality start streak. He gets to pitch away from Camden Yards against a pair of beatable teams when he heads to New York to face the Mets then Toronto to take on the Blue Jays in Week Ten as well. Of course, he is pitching for the lackluster Orioles, so that does limit his utility overall. No one will blame you if you let him sit on the bench despite his two-start status.

Keller winds up this week’s middle tier options and would warrant a higher ranking in the tier but for the fact that he is still being stretched out as a starter and likely will not pitch deep enough into games in Week 10 to be eligible for a victory. He has shown excellent control thus far in his limited career as a starter in the majors (just a pair of walks in his two admittedly short starts) but is not profiling out as a strikeout artist when his minor league numbers are reviewed. As with teammate Duffy, both his starts are on the road, and against somewhat formidable opponents in the form of the Angels and A’s, which also limits his usefulness at this point.

There are a few bottom tier residents that have some potential in Week Ten, particularly the top three starting pitchers in this group. Fiers has a pair of difficult matchups, and neither Godley or Lopez can be counted on for more than a streaming start, Godley when he toes the rubber in San Francisco, and while not great, Lopez’s start against the Twins has a better outlook than his second start in Boston. The balance of the bottom tier dwellers are best left to your opponents to pick up and/or employ in the coming week, as all are risks to hurt your fantasy stat line. Even if you desperately need some pitching, do not be swayed by the two-start status, and look elsewhere for pitching help.